It's been quiet enough down on Boogie Street, but it'll be absolutely silent over the next two weeks. Tumbleweed may even blow past the cantina.

Pat and I are off to Croatia today for what I hope may be some sun and relaxation, although some forecasts predict thunderstorms for tomorrow. Whatever, it'll be a break. 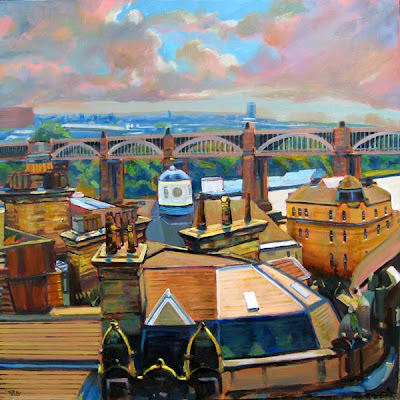 My, but I found this taxing. An awful lot of close colours made it difficult to get the buildings in recession. Anyway, this will be the last one I'm doing for the Red Box show. I'm simply out of time to do more, although there were a couple I had intended to finish. On Saturday, Pat and I are flying to Croatia for a couple of weeks, so tomorrow will be taken up with last minute arrangements.
Posted by harry bell at 22:16 7 comments: 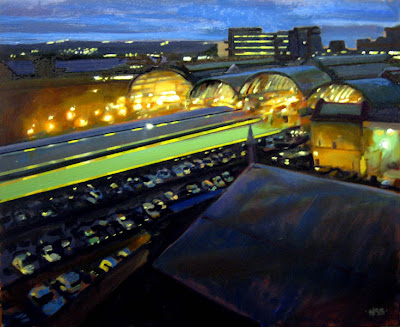 Sorry it's been so quiet here, but I'm desperately trying to finish the Red Box pictures this week. This is another you've seen before, if you're a regular reader. I wanted to finish this one for the Red Box show, too, because I thought it fitted nicely with the other views of Newcastle I plan on showing.

The photograph is as accurate as I could get it, but still displays a little lightness in the upper half (from my strip light, I guess).
Posted by harry bell at 16:56 5 comments: 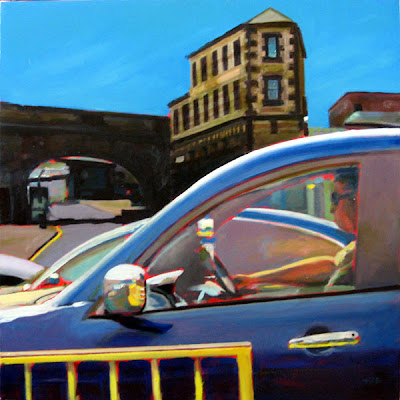 You last saw this one back in July. I decided that it would fit reasonably well in the upcoming Red Box show, especially if, as is possible, I need to hang some of my other Transport pictures to make up the numbers, so I pressed on and finished it.

Referring back to my post about passion and the reason for finishing pictures, it became clear to me today that having a reason, an incentive to finish them is very important. A deadline for an exhibition really gets me moving. If there's no great likelihood of a picture being seen on a gallery wall, I'm far less likely to want to push on to the finalisation.
Posted by harry bell at 17:12 6 comments:

View from the Keep 2 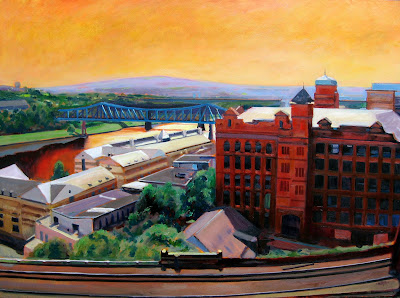 Another one under my belt. I think there may be too much red showing in this photograph, or maybe that's just my monitor. I can't tell.
Posted by harry bell at 14:40 4 comments:

View from the Keep 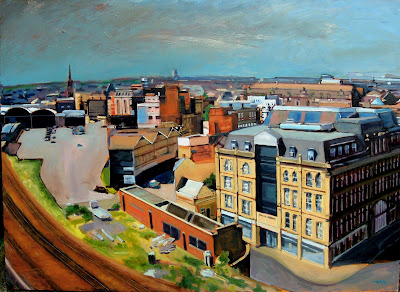 After a while you realise that everything else is just fiddling and you must simply stop. I think it was Picasso who said, "A painting is never finished, only abandoned". Leonardo may have said something on similar lines, but after all, Picasso also said "Bad artists copy. Good artists steal", so who knows, he may have stolen that too.

I've called it a day on this one. I'd forgotten how tiring it is to work on a painting this size, but also how ultimately rewarding.

The photograph was difficult to take. I had to do it in the garden but even though the sun was behind clouds, it's showing a slight darkening to the left (or a slight lightening to the right) which isn't as noticeable in the original. The lens has also made the curvature of the horizon more pronounced, although the skyline does actually do that.
Posted by harry bell at 14:18 2 comments: 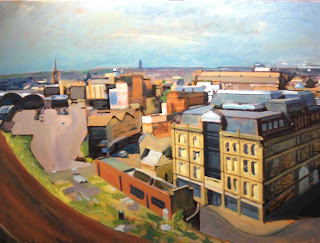 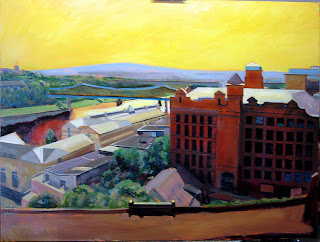 View from the Keep 2 (work in progress)

Have you ever wondered why on earth you started something? I've mentioned before how much I hate doing windows in buildings, so you can probably guess how I felt today as I started the tedious business of putting in the windows in the main buildings in both of these. Still, they're in place now, even if there's a good bit of work still to do to get them to look OK.

Overall, I'm quietly pleased with the way these two are coming along, although I'm still a little anxious at the lack of time to both finish these and get something else done by the end of the month. I may have to resort to showing older work after all.. While that's not necessarily a bad thing, I did want to pull out all the stops for this show.
Posted by harry bell at 19:16 4 comments:

The Second Big One 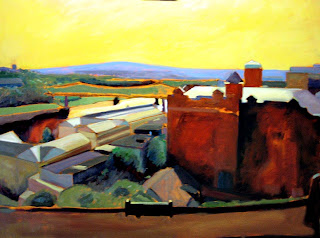 View from the Keep 2 (work in progress)

I know I have to have at least two large paintings for the Red Box show, so this is the second of the 3 x 4 feet canvases. Although I can still easily work on the first one, there'll come a time when only small amounts of work will be possible due to drying issues. By having two on the go, I'll be able to switch from one to the other. This is my preferred way of working anyway.

The red brick building at the right is the Turnbull Building which featured in a recent post. The view here is looking up the Tyne, with the Metro Bridge (as yet only showing as a remnant of the orange imprimatura) in the background. In the immediate foreground is the East Coast mainline, which shows up in the bottom left hand corner of the first Big One.
Posted by harry bell at 17:43 No comments:

More Work on the Big One 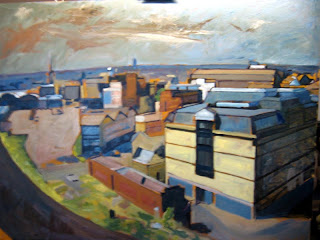 Yesterday's work went well. I defined the buildings more and developed the relationships between them. The roofs on the main structure at the right are starting to make more sense and the grassy ares on the left (which lie alongside the main London-Edinburgh railway line) sit better than they did yesterday.

The large open car park in front of the railway station looks a little odd, but should start to work better when it gets more attention - tomorrow, I hope.
Posted by harry bell at 14:06 2 comments: 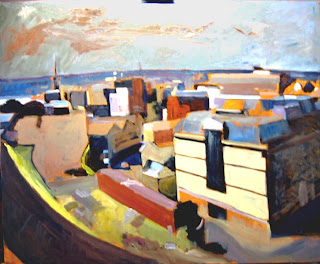 Having said all that about unfinished work, I have to leave one or two that I was keen to finish, unfinished for now. For most of the year I've been conscious of needing to get some work done for the Figure8 show at the Red Box Gallery in September. Red Box is a prestigious gallery and any work there will, I hope, be seen by people with good connections.

What I wanted to do for this show was to find a way of reviving my interest in painting Newcastle. For some time I've felt that I'd exhausted that interest (and it was a passionate interest!) but recently I began to think that looking at the city again, taking into account my more colourful approach of the last year or so, might produce something fresh.

I appreciate the danger, discussed in the previous post, of building up a "mere" interest into a false "passionate" interest, but I believe this time I've got it right.

Last week I ordered a couple of canvases, 3 feet by 4 feet, and they arrived on Thursday. On Thursday night I began by laying down an acrylic imprimatura of raw sienna and by teatime on Friday I'd reached the stage you see above. Sorry about the quality of the photograph - it's going to be difficult to photograph this one.
Posted by harry bell at 12:27 6 comments:

Regular readers of Boogie Street will, I'm sure, be aware that I have a tendency to start paintings which is not balanced in equal measure by a tendency to finish them. This blog is littered with unfinished "work in progress".

Why should this be? That's something I've been thinking about recently, because I've been wondering if settling on a reason for not completing work might lead to a degree of self-knowledge which could help in structuring a more focused approach to my work. Unfortunately, I suspect that the reasons are several and quite often interrelated.

First of all, I simply enjoy the early stages in a painting, when it's possible to be free in the application of paint and when the picture has countless possibilities within it.

Secondly, once the painting reaches the point of being almost done, I can see whether or not it's achieved any or all of its original potential. At that stage it's tempting to leave that one and take up a new challenge.

The problem with both of these is fairly obvious but is worth setting out here - I'm a professional artist who needs something to set out on his metaphorical stall. Less obviously perhaps, there is the belief (a belief I subscribe to) that the creative process isn't complete until the work has been seen by someone other than the creator.

What I've begun to consider is whether I may be going astray due to a willingness to tackle a subject merely because it looks like it would make a good picture.

In one of his interesting email newsletters ("Mere Interest Versus Passionate Interest"), creativity coach Eric Maisel explains how "many things interest me, but not to the same extent. Some are mere interests, others fuel brainstorms."

Looking back over my unfinished paintings, I can readily see that some of them arose out of an interest in the subject matter, but an interest that failed to rise above "mere interest". By contrast, my series of vaporetto paintings and the subsequent paintings of Prague trams came from something that really excited me.

When faced with the consideration of a new subject, is it possible to determine whether it really has that quality of excitement about it that will lead to passionate work? Maybe, but as Maisel says:

What I need to do, I guess, is try decide which of those unfinished paintings are worth finishing at all. Many of them are. But there are those that under close scrutiny will fail to meet the "passionate about" test; of those, some will be worth finishing because the effort involved will be minimal enough to justify it in terms of having a painting available for sale. The rest can be consigned to the dustbin, or painted over.
Posted by harry bell at 22:28 3 comments: