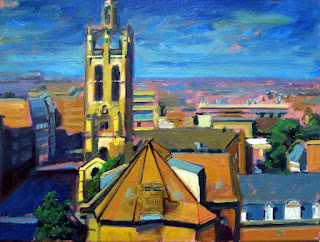 Back to the Club on Friday to spend a short time working on the Cathedral painting. The foreground is coming along, but the more distant view will take some time to get right, I think.

[And as an aside, can I just say how irritating I find the new Blogger posting system  It wasn't broke; it didn't need fixing.]
Posted by harry bell at 14:10 2 comments:

Preparations for a Show 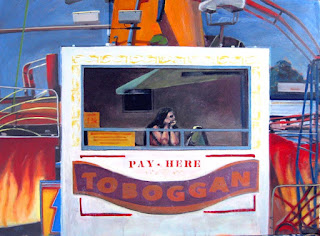 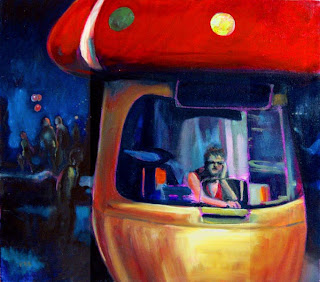 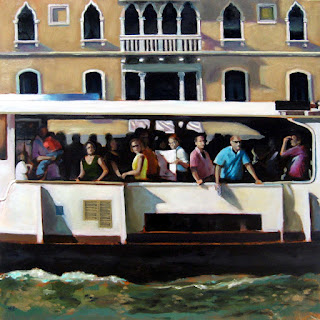 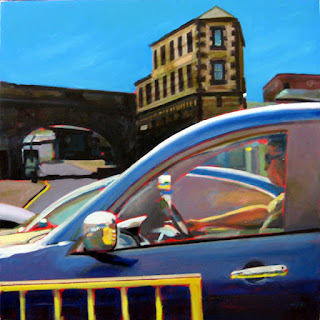 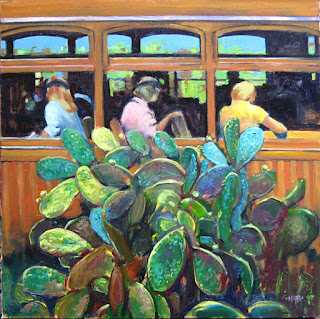 
I'm beginning to put together some pictures for a new Figure8 show in Bishop Auckland Town Hall. There won't be any new paintings from me in the show, but I'm trying out some combinations of old and new ones to see what resonances they might draw from one another. I rather like the old Hoppings paintings (the two at the top) with the more recent vaporetto, car and train images.

The Hoppings paintings date from 2004 and show that even then I was intrigued by the idea of  "people in containers".
Posted by harry bell at 16:10 4 comments: 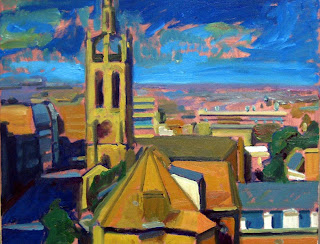 I had some good news today which made me want to get on with some fresh painting. So it was back to the Art Club where I set about painting what seems to be a view of Newcastle-en-Provence but is in fact St Nicholas's Cathedral in Newcastle upon Tyne. A good start on what was actually a very wet day.
Posted by harry bell at 20:00 No comments: 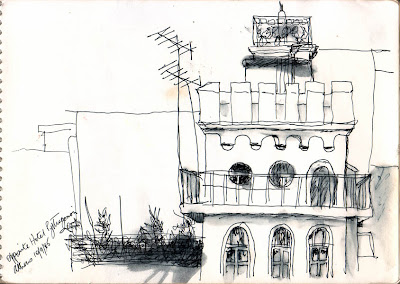 Opposite Hotel Pythagorion 16.9.85 (Fine marker in A5 sketchbook)

I'm still finding a reluctance to get work done right now, but it's always been my policy to try to keep blogging through these flat patches.

Previously, I posted from my series of Old Drawings but those are all posted here now. So what I've decided to do is work my way through my sketchbooks. I've mentioned before that the sketchbook habit has evaded me over the years, but I do have quite a few sketchbooks and some of them even have drawings in them!

In 1985 I decided to try to get into the habit of sketching and bought an A5 spiral bound sketchbook to take with me on a trip to Greece. This is the first sketch I made, looking out of the window of my room at the Hotel Pythagorion in Athens. It was done quickly as I'm sure you can tell and I used a rather unsympathetic marker, but I was happy with it at the time.

I've often thought that I might use the sketch as the basis of a painting, but that hasn't happened so far.
Posted by harry bell at 15:07 2 comments:

Back to the Cakes 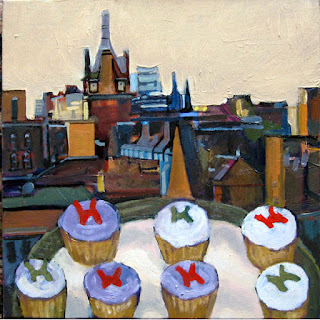 I figured it was time to move this painting to a conclusion. It's not quite there yet, but it doesn't have far to go. All I have to do now is find the reference material I was using and which I seem to have mislaid during my break. Tsk.
Posted by harry bell at 19:36 4 comments: 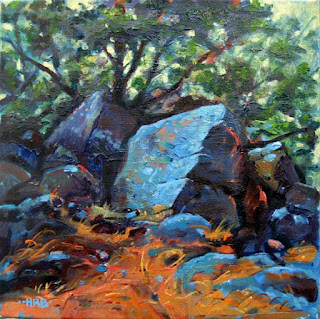 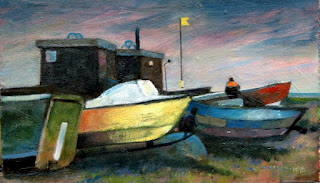 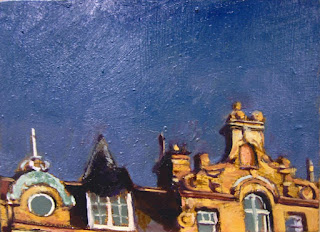 As an interesting corollary to the previous post, I thought it worth mentioning that during the Month of Short Retirement, I did in fact sell these three paintings to some good friends who can now add them to what, in my mind, qualifies as a Harry Bell Collection.
Posted by harry bell at 16:49 2 comments:

The Times They Are A-Changin' 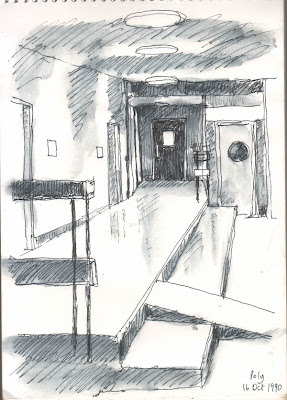 Corridor 1990 (Watersoluble marker in A5 sketchbook)

A month is a long time in the Blogosphere. If that isn't a famous quote, it ought to be. It's just over a month since I posted anything here; I feel I should act before the inertia really builds up and starting again becomes a chore. I'd hate to think you'd all given up and gone for good.

I turned 65 at the end of January and became the grateful recipient of a State Retirement Pension. Suddenly, I'd come out of a long dark tunnel and a huge weight was lifted from my shoulders. For the last ten years I've been beavering away trying to earn a crust from my work and now, well, I don't have to. I've never painted anything I didn't really want to paint, but there was always the thought at the back of my mind that I needed to sell it.

And now that thought has evaporated. I can do whatever I like, including doing nothing. which is rather what I've been doing for the last month, at least in terms of making art. I have been visiting friends, I have been entertaining friends who paid a return visit; and I have been seeing exhibitions, most notably the wonderful David Hockney RA: A Bigger Picture at the Royal Academy in London.

But now I feel it's time to get back in the studio and make art again. There's another Figure8 show coming up, and I may want to do something new for it (or I may not - the power of the new freedom!). The great thing about how I am now is that I can do anything and everything, without considering the consequences.

But there are a couple of paintings I think should be finsihed before I launch into anything fresh. So watch this space. Oh go on. Just to please me.
Posted by harry bell at 16:02 No comments: