In the South Tyne Valley 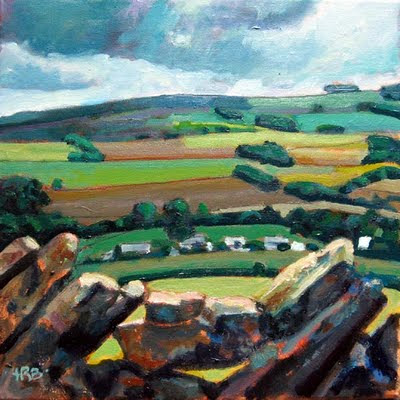 The second of this pair of paintings from the South Tyne Valley.
Posted by harry bell at 11:34 2 comments: 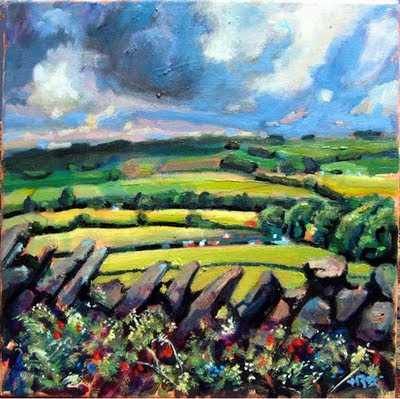 Looking round the studio yesterday, I noticed how much the study of landscape has occupied my time recently. I never thought I'd say that, but I suppose it's due to a shift in perspective and a realisation that over time I've amassed quite a store of reference material not related to towns.
Posted by harry bell at 11:16 2 comments: 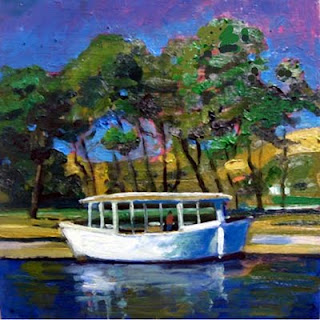 Boat with Pines (work in progress)

This is a painting of a little boat moored near the marina at Trogir in Croatia. My plan today was to finish off the small painting I began last week, but before I did so, to start another so I'd have something to keep me going when the small one was done.

As sometimes happens, however, I got so absorbed in this new boat painting that I just keep going until it was time to go home. So now I'll have two to finish off next week
Posted by harry bell at 21:08 No comments: 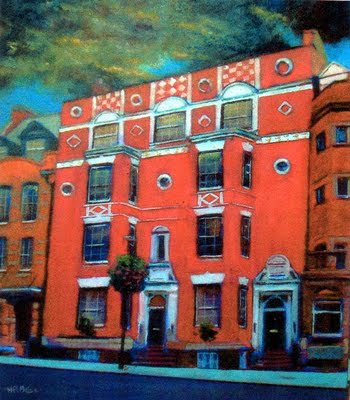 My recent excursion into working to commission worked really well, I thought, so I was interested to read John Salmon's blog post, Commissions? No thanks, in which he recounts the awkward progress of a commission he undertook and the increasingly bizarre items he was asked to include.

John's article reminded me that the Holy Island commission isn't my first commission. The painting shown here was done as the result of a commission I was offered in October 2006. The proposal looked promising. As one of a group of artists, I was to paint a "portrait" of the headquarters of a financial services company. The resulting work would be hung there, a brochure would be printed to include all the works and prints would be shown in their offices round the country. No extra payment for the prints, but I was content that my work would be seen widely.

I accepted and completed the painting using photographs provided by the commissioning agent (who was not the client), shipping it off in November 2006.

By December I learned that the client had decided to postpone printing the brochure until the following March, but I would be contacted in the near future for a written perspective on my work to be included in the brochure.

By July 2007 nothing further had been heard and I had yet to issue an Invoice (foolish me). The commissioners told me the project was still on hold but that I should issue my invoice direct to the client. I did so on 10 July.

I issued a Statement in August and followed that with a letter later that month.

On 4 January 2008 I sent a new Invoice and Statement to the commissioning agents, arguing that my contract was with them rather than the client and asking for payment within seven days.

That did at least shake things up, finally. By return of post my Invoice and Statement came back with an apologetic letter, suggesting that "the confusion may stem from a changeover in staff" at the client's offices.

Payment arrived from the client on 9 January 2008.

It might be argued that I should have been more proactive in chasing up the payment, but this was my first experience of a formal commission and was unsure of how things worked. I also had other problems in my life. The most annoying aspect of it is that I rather enjoyed carrying out the work and had hopes that it might lead to similar commissions. The whole episode depressed me and I put it out of my mind. Even the original photographs I took of the painting have disappeared - the one shown here is taken from the inkjet print I attached to the Invoices.

[Later: A trawl of the Internet shows that the client company went into administration in May 2008, after allegations of "financial irregularities." and was sold shortly afterwards. A history of the business, following the arrival of the man whom I was told in January 2008 had all of the pictures, makes fascinating reading. I don't know where he is now, or where my painting might be.]
Posted by harry bell at 12:56 4 comments: 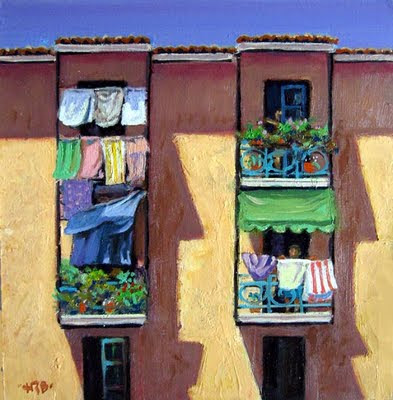 Saturday's not usually a painting day for me, but while Pat's away having fun in London, I thought I'd press on with Finishing Off. Here's one I don't seem to have touched for just over three years. Maybe it's because I've strengthened my colour sense in the intervening years, but today it moved along very well. Well enough to reach completion, in fact.

Today was my first real afternoon of painting in the new Club premises, and it worked pretty well. I thought it might be too crowded and maybe a little stuffy, but there was only a handful of people there and the extractor fan was working efficiently.

I settled in quite quickly and the very small new painting I'd sketched out on an old piece of board cut from another painting went remarkably smoothly. In fact, had I not needed to go shopping, I could easily have finished the picture in one go. As it is, there's really only the river left to work on.
Posted by harry bell at 22:47 2 comments: 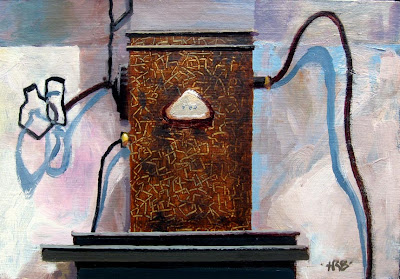 It's that period after an intensely creative spell, when I tend to roam the studio looking for something to do that won't involve too much time. On such occasions, my eye usually turns to unfinished pieces, of which there are many (too many, some may say).

Today it lit upon this remnant of a past obsession with bits of strange and possibly unsafe electrical wiring which Greece has aplenty.

So here it is finished. File it under "Oddities".
Posted by harry bell at 17:31 2 comments:

A Good Day Out

Saturday was a very satisfactory day. The Holy Island pictures were lined up for the client to choose one and - gratifyingly - the choice proved difficult. She liked all of them for different reasons and waited until it was time to go before making her choice: Evening, Holy Island.

At which point I got a pleasant surprise. Her father decided to buy Orange Sunset, Holy Island.

If you're reading this, Cat and Laurie, I hope you get many years of pleasure from your paintings. Many thanks for commissioning this project and ultimately for choosing the works you did.
Posted by harry bell at 12:38 2 comments: 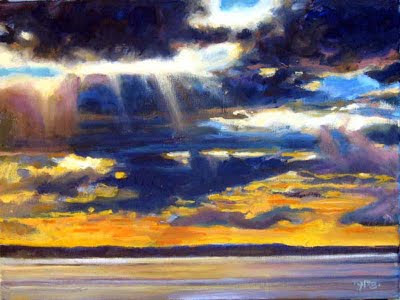 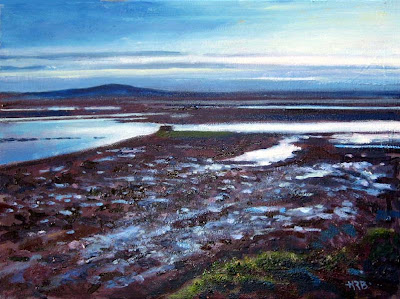 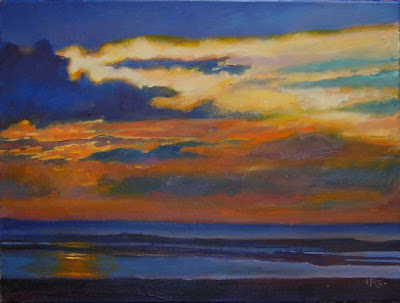 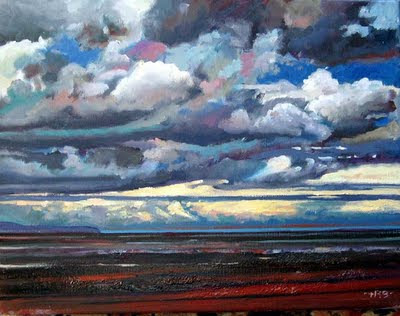 The plan was to finish these yesterday, but like many of my good plans, things got in the way, so I was forced to work on them today with the likelihood of their not being dry by Saturday. And Saturday is when they're to be shown to the client.

The bad news is that it was a gloriously hot sunny day today and I had to work in the studio. The good news is that I was able to stand them outside in the garden where the sun made short work of drying them perfectly.

These photographs are not colour perfect, I think, but they're close enough. I wonder which one she'll choose tomorrow. Which would you?
Posted by harry bell at 20:13 8 comments: 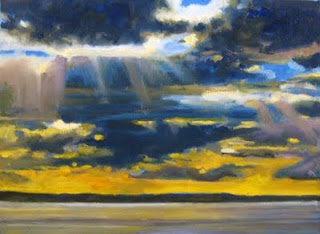 Today's work on this painting puts me within one day's extra work to finish all four Holy Island Skies, which is very satisfactory. I have to admit that this painting isn't easy, but I think my recent visit to the excellent exhibition of John Martin's apocalyptic visions helped me along.

I thought the Martin exhibition was wonderful. I was familiar with the few paintings in the Laing's permanent collection, but wasn't prepared for the huge later works and the terrific use of colour. I'm convinced now that his daring use of colour was the equal of his contemporary, Turner. If you missed the show at the Laing, try to catch it at Tate Britain. 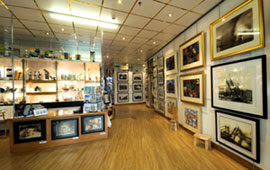 Did I mention I'd been investigating a new (to me ) gallery in Newcastle? No, I guess not. Last week, in an idle moment, I wandered into the North East Art Collective's gallery in Eldon Garden Shopping Centre where I had a good conversation with John Thompson, the owner.

Long story short, yesterday I took in six paintings to be hung in the gallery. John's background is in business rather than art, but he's determined to promote the artists of the north east and I have hopes that he'll do well in that respect. He's an outgoing talkative man who I think customers will take to easily.
Posted by harry bell at 12:58 No comments: