I'm on the point of starting a new series of work for some of the shows we (Figure 8) have lined up for next year, but I'm short of the canvases I want. I can't make them myself, as I pulled a muscle in my right arm last week, stretching one up. And it's too late to order them this week, as they'd probably arrive when I'm away on Arran next week

So in the meantime, I started a new one at the Art Club yesterday. The view is actually from one of the offices on the same floor as the Club, but it surprised me how many of the Club members didn't recognise it. Even artists go round with their eyes closed, sometimes. 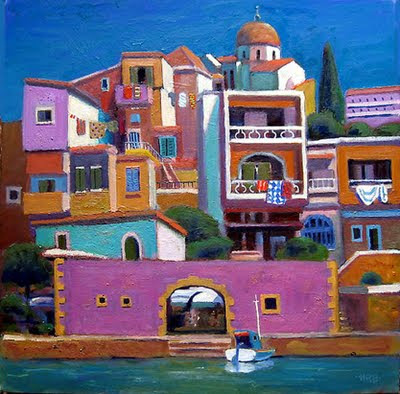 Aegean Hideaway (Oil on canvas, 20 x 20 ins.)
I've done all I can to this picture, I think. Any more becomes pointless tinkering. I'm pleased with its overall look: it's a step towards an old goal, that of marrying my painting with something of the quality of my cartoons. Not quite real, more decorative, but still rooted in the world.
It's perhaps significant that I should have finished this one today. Yesterday, Patsy123 put together the last pieces of the jigsaw of our Summer holiday. Summer? You remember Summer, surely?

Originally, our plan was to go back to Venice, but the money wasn't really there to do it justice, so we began to look at the possibility of Majorca. I've been once before, and liked Palma and some of the quieter places in the North of the island. But I think we'd left it a bit late to try to fix things up on the Interweb, our preferred method of holiday booking.

So, in fear of not having a sunshiny break at all this year, we settled on possibly my favourite place of all - Crete. At the beginning of September we fly to Iraklion and transfer to Rethymnon for three days. Then eight days in Chania, before heading back to Iraklion for three days there.
And I find I'm so excited about it! It might appear that this was a last option, a consolation prize, but it just ain't so ... I'm delighted to be going back to one of the loveliest places on earth.
Posted by harry bell at 14:32 8 comments: King Street (start)
I promise to start posting some finished pieces of work Real Soon Now, but for now I'm in a getting-them-started kind of mood.
At the Art Club yesterday, I worked on a painting begun at home earlier in the week. It's one to go with the picture of South Shields Metro station, which I've now brought home so I can look long and hard at that tree. The image above is where I started at the Club.
What I like about this image, in particular, is the way the green Metro bridge cuts across the street and forms a counterpoint to the main thrust of the buildings. I may seem to be dotting about in terms of subject matter, but it's my colour experiments which are of most interest to me at the moment, and I'm quite pleased with the way the use of colour is coming along.
This is how I left it when I came home: I got no work done last week . On Monday Buddy K and his wife, Susy Sue, drove Patsy123 and me down to Wokingham in their car and we spent most of the week with them.

Wokingham's relatively handy for London, but the rail fare's a bit of a bugger, so my new Senior Rail Card came in handy. It made it less painful to travel into town to take a look round Tate Britain and later, to see the Royal Academy Summer Exhibition.

The show being hyped at Tate Britain is Hockney on Turner Watercolours. It's a bit of a come-on, actually, in that only one room of the show has been curated by David Hockney and there's nothing much to say why he chose the watercolours he did. But as I'd read that in a review previously, and because it's always a delight to look at Turner's watercolours (especially the recently purchased "Blue Rigi"), I didn't mind.

Hockney has some giant watercolours of his own associated in an obscure sort of way with the Turners (the "association" being that they both used watercolours), but not signposted in any way that I could see. It was only as we were leaving, having discovered a lovely Prunella Clough retrospective, that we noticed the Hockneys hanging on the walls of a stairwell off to one side.

There are five of them, each composed of several panels, depicting the same wood at different times of the year. I still have difficulty with Hockney's very strong, almost strident colours (especially his reds and greens of course), but after a short while I warmed to these pictures.

There's an even bigger Hockney painting in the Summer Exhibition. It takes up one end wall of Room III and is painted in oil on 50 canvases. Up close, it looks a bit iffy. It's of a wood again, the trees without leaf, and there are obvious discontinuities between one canvas and the next, both in terms of branches and their colour.

Once you get to the other end of the gallery, however, those imperfections become irrelevant, and the work takes on a genuine grandeur. I realise that scale plays a large part in this kind of effect, but I think Hockney has made a remarkable piece here.

As for the rest of the show, it was mostly very enjoyable. There are always things that I don't like - I failed to be moved by newly-elected Academician Tracey Emin's neon squiggle, for example. In fact I thought it quite pathetic, but really it's not fair to single her out on the basis of her unwarranted celebrity status.

And as for Gavin Turk's "Dumb Candle" ... A candle carved from a sawn-off piece of broom shank. This was given the Charles Wollaston Award of £25,000 for "the most distinguished work in the exhibition." Distinguished? It is to laugh.

Bill Woodrow, who chaired the judging panel, apparently said: "Dumb Candle is an imaginative work with subtle undertones that pick up on several significant art historical moments. The simple candle form is one of the oldest symbols of life.''

But these are minor grumps. There are more than enough good, interesting paintings, prints and sculptures to make up for the Usual Establishment Suspects.
Posted by harry bell at 21:30 4 comments: