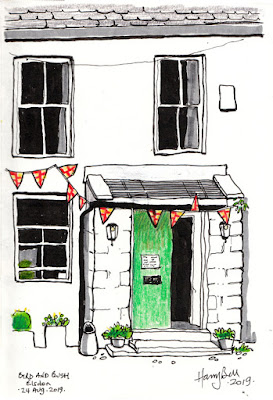 Bird in Bush, Elsdon
(markers and coloured pencils in A5 sketchbook)

A second day of blazing hot sunshine! In England!

Fortified by slices of melon and punnets of strawberries, sixteen sketchers (including some non-sketchers and a child) were yesterday driven over speed bumps and gravelly roads into the wilds of Northumberland by Bardon Mike in a Newcastle University minibus.

Arriving around midday in the delightful village of Elsdon, we showed Mike who was in charge by rejecting his invitation to draw the little Gothic church and opted instead for the food on offer at the Bird in Bush. I had quite possibly the best BLT baguette sandwich ever and washed it down with a pint of IPA brewed on the premises.

The sandwich was so big it took much longer to eat than expected and I never got more drawn than the front of the pub!

Rounding up his scattered passengers, Mike suggested we go on to Blakehope Nick by driving part of the way up the Kielder Forest Drive, apparently the longest forest drive in the UK.

The Nick comes as quite a surprise when you top the rise in the road. It was designed and built by Newcastle University Architecture School students and I warmly congratulate them on it.

Not a lot of time to draw, but I did want to get something done. Going into the drawing quickly with a Uni-Pin BR marker may have lent the sketch a bit of a heavy-handed appearance and the hot sun certainly made seeing pretty difficult, even with sunglasses on, but ultimately I think I caught something of the structure. 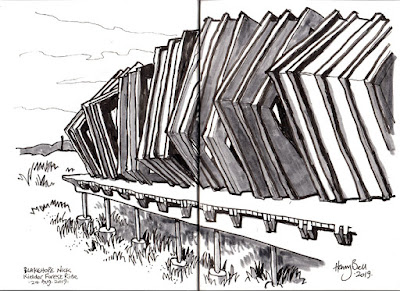 Blakehope Nick
(markers over two pages of  A5 sketchbook) 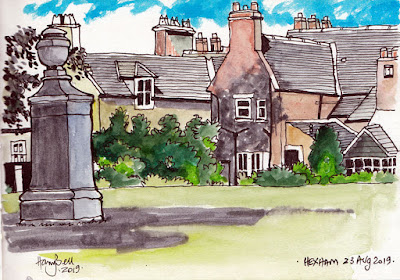 Back of Market Street, Hexham
(Markers and watercolour in 14.5 x 21 cm sketchbook)

An unusual afternoon with Gateshead Art Society yesterday. Once a year we try to have a day out sketching and this time we opted for sketching in and around Hexham Abbey.

I find historic towns like Hexham quite difficult when it comes to urban sketching because it's often a problem to mentally separate the historic from the mundane. By which I mean that while most sketchers would go to Hexham to draw the admittedly lovely Abbey, I have to ignore it and look around for the back lanes and crumbling buildings of the "normal" workaday town, because that's what does it for me. I love old brick buildings, failing drainpipes ...

Eventually I came across Allan who had found a nice stone wall to sit on at the side of the Abbey. While there wasn't really sufficient room for two of us, I did realise I could lean on an adjacent wall and rest my sketchbook on top of it. That way, I was able to draw this scene of the back of Market Street. I started with markers but eventually decided to include a little watercolour. I still don't like watercolour.
Posted by harry bell at 18:35 No comments:

Past the Great Rock 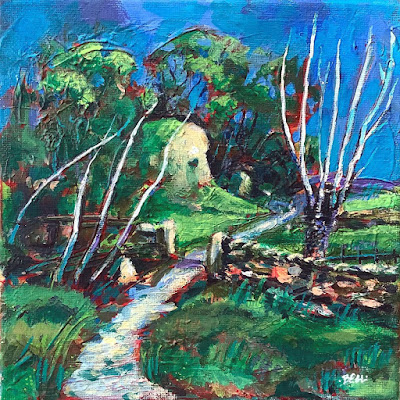 This, too, was an unfinished painting in the Path Through the Woods series. If memory serves, it's based on a scene in Little Langdale where I spent a week with painter mates in 2007.

I used a lot of acrylic gel at the start of this picture because I'd recently returned from a workshop with Lesley Seeger where I'd learned its use.
Posted by harry bell at 18:21 No comments: 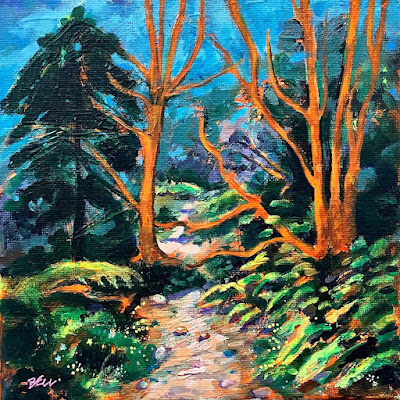 The Path Never Taken
(acrylic on canvas, 8 x 8 in)


Over the last few months I've started, and left unfinished, quite a few paintings. I've written before how I like starting a picture and, seeing what I think will be the final image in my mind, leaving it to be finished later. As the enjoyment of starting exceeds the enjoyment of finishing, inevitably more pictures get started than are finished.

Sometimes it takes an exhibition asking for or suggesting a particular theme to get me to return to a painting and move it to completion. So it is with this painting in the Path Through the Woods series begun in 2017. There's a call for an open exhibition locally that suggests to me that I might enter some of these Path paintings. Two of them were unfinished, this being one of them, so I buckled down to work, and here it is now, finished.

Of interest, to me at least, is that the darker atmosphere of the two recent pub paintings has found its way to a certain extent into this one.

The Portland and Burton House 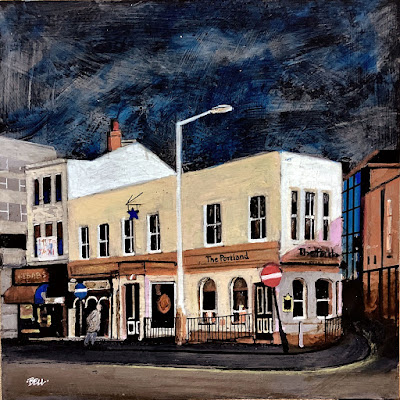 I took a photograph of this Newcastle pub sometime in the 1980s but somehow never found a way into making a painting from it. The pub itself was demolished in 1992.

Recently, I completed a painting of another vanished pub, Burton House, demolished in 1992: 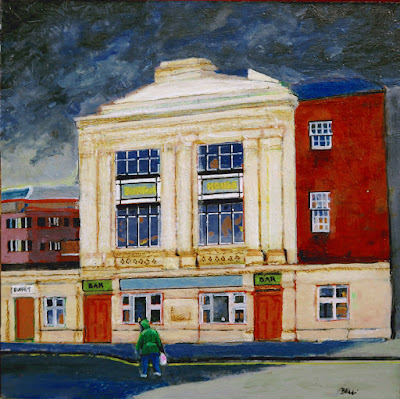 Casting about for another similar subject, I tried to make something from the photograph of The Portland which I'd photographed at the same time as Burton House. Somehow it just didn't work and I abandoned it, painting over what I'd done.

And then I found myself looking at the work of Ed Kluz, with his lost great houses of England, standing out against very dark skies, and comparing them with my painting of Burton House. And that was when I realised I'd been trying to paint The Portland with a clear blue sky in an attempt to imbue it with some kind of cheerful memory. But it, and Burton House, really belong to the grimy past of Newcastle and fit not uncomfortably into that category sometimes known as the Northern School.

When I failed in my first attempt to paint The Portland, I decided I'd had enough of painting local urban scenes, long a staple of my output. With the success of this new painting (in my opinion, at least), I've had to concede that I'm still interested in the subject.
Posted by harry bell at 20:17 No comments: 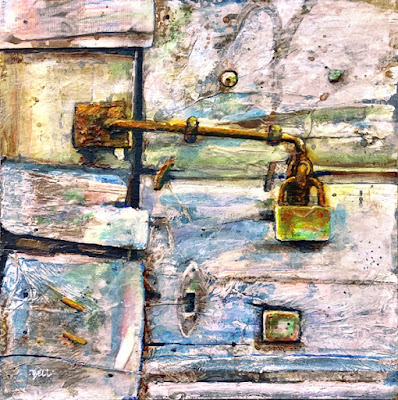 Another of my new paintings of old doors, celebrating the textural qualities of weathered wood, flaking paint and rusting metal. 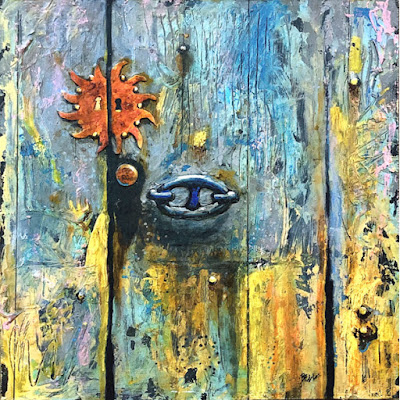 As I said last month, I enjoyed making the painting, Door Textures, and decided to make more of these texture pieces. This one uses acrylic paint, paper collage, Posca Pens, coloured inks and acrylic gel.
Posted by harry bell at 18:25 No comments:

Catch of the Day 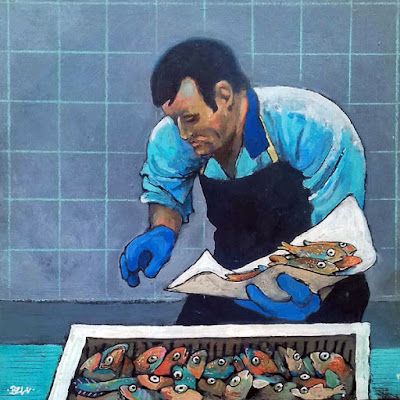 I'm happy to report that this painting - one of my favourites - is now hanging on the wall in its new home in Yorkshire.
Posted by harry bell at 14:34 No comments: