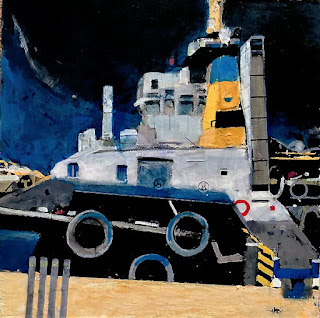 I made a freely painted start to this new subject. I was uncertain about how it would develop, but that was an attractive prospect. The painting of it kept presenting me with umpteen niggles that demanded correction, such that I got really fed up with it, but I like it now it’s finished. My intention was to make this the first of short series, but the proposed second in the series looked so disappointing that I quickly covered it up with something more promising.
Posted by harry bell at 19:34 No comments: 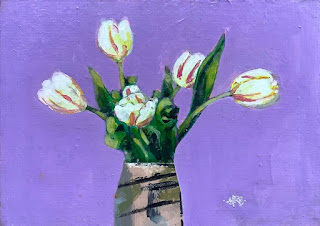 (acrylic and collage on board, 5x7 in)

Painted for my wife’s birthday. Happy Birthday, Pat, pet!
Posted by harry bell at 15:03 No comments:

A Short Walk in the Ouseburn Valley

This post should have been entitled something like "Sketch Crawl: in the Ouseburn Valley" but things worked out differently. There was a time when Sketch Crawls began at a civilised time and lasted until it was time to go home for tea. Under more recent Tyne and Wear Urban Sketcher management they've become daylong events so I find that, if I don't arrive for the ten o'clock start, there's a danger that I won't link up with the other sketchers.

And so it was on Saturday. I'm not an early riser; never have been, never will be, but the current Lockdown situation has made it more difficult than ever to get up and out early. There's also the fear induced by getting onto a bus without knowing if it'll be full of people without masks breathing the Deadly Virus over me.

As it turned out, there were only six other people on the bus, all wore masks and were sitting in appropriately distanced seats, so I felt reasonably happy when I got off at the Baltic and urged my knees, now very stiff from months of sitting in the house, to cooperate in the relatively short walk across the Gateshead Millennium Bridge and along the Newcastle Quayside to the Cycle Hub where it was all about to Kick Off. Or where it was due to Kick Off at ten o'clock, but now it was eleven o'clock.

I looked in the Hub cafe, I looked down into the marina, I looked up and down the quay, but no sketchers visible. Maybe they'd moved up the Ouseburn? There's always something to draw in the way of derelict buildings, boats and ducks, so I headed upstream.

As passed under a road bridge, I noticed what, for me, is a new addition to the local decorations. 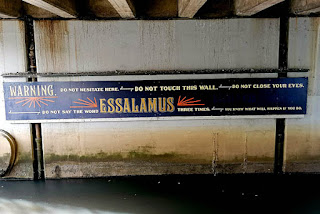 I've seen Candyman, so there was no chance of my saying the word ESSALAMUS three times and I passed safely through and soon came to the first of the day's boats. 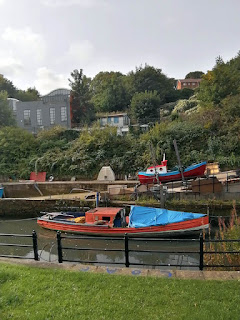 I liked them and there were jolly workmen doing workman-like things to them, but my knees were aching, there was nowhere to sit down, the path was narrow and people kept passing by doing their best to socially-distance but inevitably failing, so I decided not to attempt a drawing and pressed on.

By the time I'd reached the area of the Cluny and Seven Stories I was developing a fairly clear idea that sketching would not happen. I sat on a bench in the sunshine opposite the pigs in the city farm, out of the annoying wind, and watched the ducks on the river as I contemplated my place in the world. Yes, it was that kind of day.

Having reached an accommodation with the day, I thought I'd walk on a little further up the valley to see what I might see. Round the corner I discovered a curious structure that turned out to be the Culvert Bandstand. I wondered how many unforgettable performances had taken place there without my ever knowing of its existence. None in recent times by the look of it. 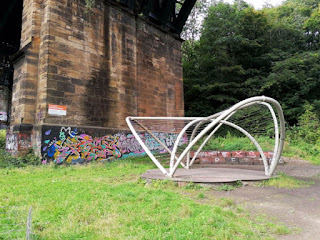 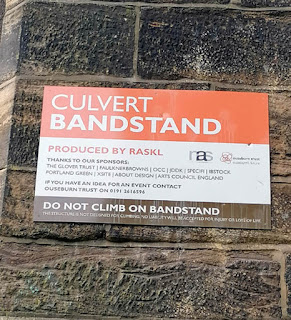 The Bandstand may be a bit lacklustre but its situation is striking, set as it is in the valley below the soaring arches of Byker Bridge, the Victorian Ouseburn Viaduct and the more recent Byker Viaduct. 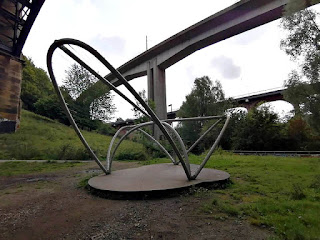 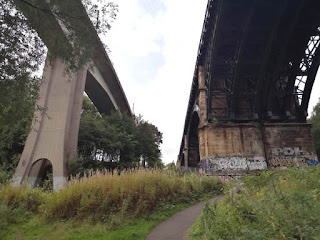 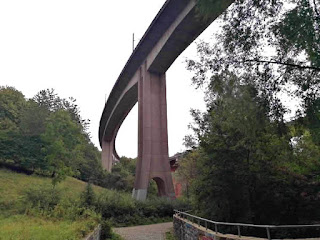 As I left the Bandstand I was struck by a piece of graffiti that stood out amongst the inevitable gaggle of tags and crude colourings. Short and to point, without being specific, it seems to sum up what a lot of us are probably thinking every day of this year. 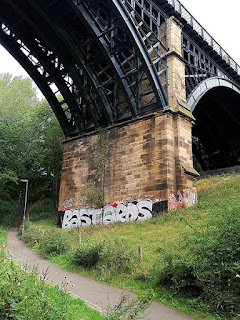 I figured it was time to go back, maybe find the others at the Cycle Hub and perhaps have a coffee. But no luck. Shortly before the Hub I passed Bethan, who said "Hi, they're all Down There", nodding back at the marina. If that were the case, her Down There was not the Down There I looked about.
Feeling tired after my unaccustomed walk, I headed back to the Gateshead Millennium Bridge, pausing only to admire, not for the first time and I'm sure, not for the last, the wonderful view up the River Tyne to Newcastle and Gateshead, nestled in the Tyne Gorge and linked by a series of splendid bridges.. 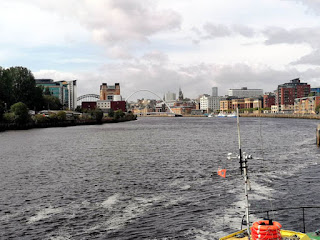 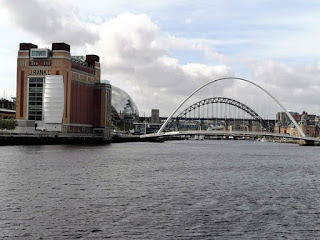 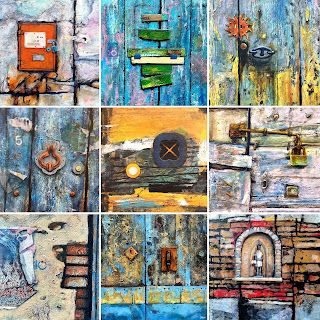 Nine Doors and Walls
Using an app, I've put together the nine paintings in the Textures Series, all mixed media on board, 12x12 in (or 30x30 cm).
I'm so pleased with the look of this arrangement that I'll be uploading the image to my Greetings Card collection.
Posted by harry bell at 18:09 No comments: 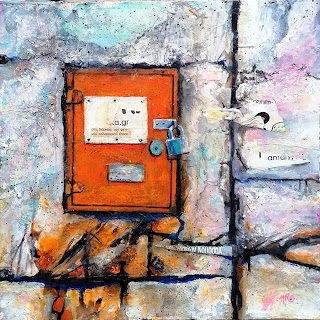 Iron Box
(Mixed media on board, 12x12 in)
A painting laid aside some months ago when it went dead on me. Revived a day or two ago by adding layers of paint and paper collage, I'm much happier with it. I'll add it to my website and to my greetings card collection.
Posted by harry bell at 18:04 No comments: 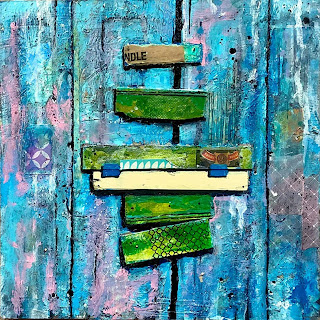 Secure Fastenings
(mixed media on board, 12x12 in)
I felt I knew where I was going at the beginning of the year but somehow got lost along the way. In attempt to get back in the groove I began a new textured piece, laying down a base of torn paper and paint.

From there I began to layer with more paint and added texture with acrylic gel and some pieces of card, before going on to the final resolved work shown at the top of the post, including patterned paper and more textured paint.