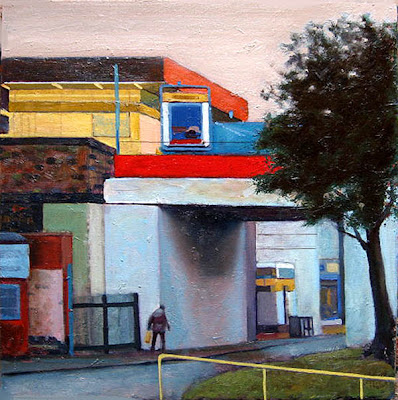 Under the Metro (Oil on canvas, 20 x 20 ins.)
I've spent some time making small alterations to this picture (last seen here) and just generally living with it. I'm content with it now, I think.
Although it was intended for a Figure 8 show in South Shields, concentrating on aspects of South Tyneside, we've yet to be given a date for that show. In which case, I think I might justifiably include it in the show at Gateshead Library next year.
Posted by harry bell at 14:18 4 comments: 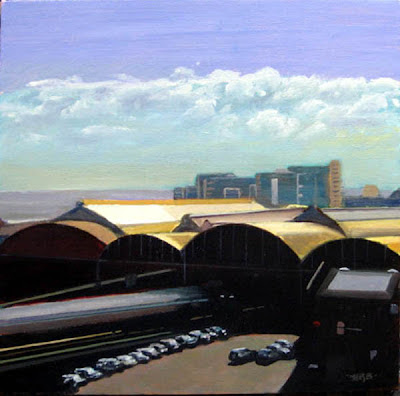 I worked into the early hours to get this finished for photographing today. You'll see that, after some consideration, I decided the long line of cars at the left were integral to the composition and worked instead on the group at the right.

I have to say that I hate painting cars, but this has worked out satisfactorily for me.
Posted by harry bell at 12:28 2 comments:

The Nice Doctor and the Practice Nurse work in a Health Centre. The Health Centre has introduced a touch screen to enable patients to announce their arrival without having to bother the Receptionist.

"Welcome Mr Zip, " says the touch screen. "You have an appointment with the Practice Nurse at 11.50. There is currently a delay of 5 minutes."

There is another button to touch to notify the Practice Nurse that I have arrived for the appointment.

"Arrive me, " says the button. 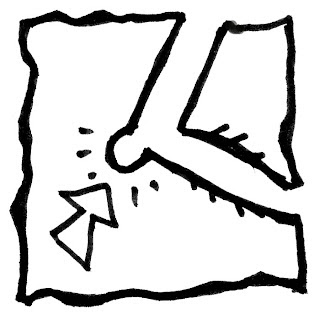 I went to the surgery on Tuesday to have my stitches taken out by the Practice Nurse. She was quick and efficient, but couldn't tell yet whether there might be a final stitch hidden under a scab.
"Just give it time," she said, "and if, after the scab has come off there's another blue stitch, come back and I'll take it out. Meanwhile, there's no need for a dressing. Let the air get at it."
By Wednesday the scab seemed to have disappeared and the elbow looked OK, if a little red. Of course, the thing about elbows is that, however hard you try, you can never get to look closer than an upper arm's length away.
Anyway, Wednesday night I went out for a pint or two with Mrs Sums & The Architect to tell them of my adventures. On the way home, I thought my elbow felt a little sticky. Sure enough, when I got my jacket off, there were several lines of clear gummy stuff running down from one point of the wound and - worse yet - there appeared to be something ... dangling. Was it me? Was it a stitch? It wasn't blue like the other stitches, so maybe it was me ...
I managed to get it to stop oozing and slapped an elastoplast on it. Then passed an uncomfortable night trying not to sleep on that side.
As it happened I had an appointment with The Nice Doctor today. I wanted him to make sure that at this important stage of my life, everything is working as well as can be expected, but I figured I might as well take the opportunity to let him have a look at my elbow.
First of all, though, he wanted to look at my picture which I'd gone to the Club to collect. He ventured the opinion that it was like a Jack Vettriano, but because he is Nice, I accepted that he meant it as a compliment.
The Nice Doctor eventually decided to look at my elbow. He looked at it and said that he thought, apart from a little swelling, it seemed to be doing well.
"But what about the dangly bit?" I asked, because I could tell he hadn't noticed it and really, it was the dangly bit that was exercising my mind somewhat.
"Aaaah, yes, I see," he said and then told me that my internal stitching was hanging out. Within minutes he'd gone out of the room and come back with something sharp and severed the dangle.
I'm still mentally reeling. My internal stitching was hanging out, for god's sake. I'm coming undone!! I feel like a teddy bear with his kapok coming adrift.
Posted by harry bell at 11:44 1 comment:

Back at the Club 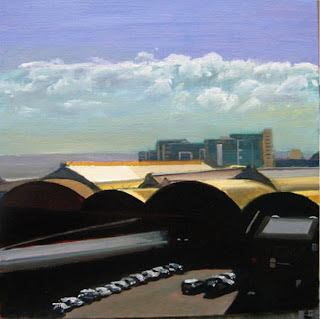 Central Station (3rd day)
I went back to the Art Club yesterday and tried to pick up where I'd left off. It was a pleasant surprise to find that, while I was away, I won last month's prize for a "holiday painting." Two bottles of wine never go amiss.
As expected, it wasn't easy getting back into the painting of the Central Station and a great deal of time was taken up talking to Plastic Man and others, and drinking coffee.
But eventually I began to recapture the mindset and was able to make some progress. Looking at it at the end of the day, I can see that, with a little more work, the cars will sit OK in the picture. However, I think I may be minded to strip out the long line of them on the left and simply keep the small group at the right. We shall see.
I've been asked to provide an image for possible inclusion in the publicity for one of Figure 8's shows next year. In fact I've been asked for the titles, sizes and prices of all of the work to be included in that show. This will probably be very difficult to do, given that I haven't painted any of them yet!
However, I think this Central Station painting may be one of them. To get it finished in time to provide a photograph, I guess I'm going to have to collect it from the Club and bring it home. Bugger.
Posted by harry bell at 10:43 4 comments:

Crete gives me the elbow 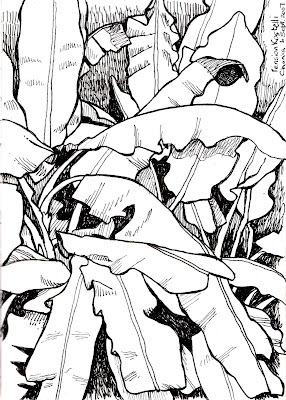 There was a cold wind blowing in from the sea. It flapped and cracked the folded umbrellas as I sat and sipped my ouzo in an otherwise deserted taverna on the harbour front at Chania. Suddenly, a Native American squaw walked by clutching a stuffed fox with a bird in its mouth. A group of inflatable Spongebob Squarepants drifted eerily after her.

Had I read the signs, I should have been prepared for Fate leading me inexorably to an examination table in a hospital in Heraklion, with doctors cutting and tugging at little bits of my elbow, shaking their heads and exchanging knowing glances.

"You shouldn't laugh," Patsy123 had said. I'd made some kind of facetious remark about "Einstein a Go Go" when I first saw the Red Indian Chief with the big feather head-dress, who was playing an electronic flute.

Despite the six or seven stitches in my left elbow, I enjoyed the last few days in Crete. It was a time of political rallies. Pictures of New Democracy leader Costas Karamanlis were everywhere evident and the New Democracy rally was an exciting and turbulent affair, with car horns , music and Greek flag waving supporters thronging the streets.

By direct contrast, the KKE put up a poor show. Patsy123 and I watched the rally from the comfort of a cafe table near the Morosini Fountain, eating bougatsa. The speeches seemed dull and perfunctory and the rock band lacklustre. We'd hummed a few choruses of the Red Flag and hoped we might get the chance to join in the Internationale - the Left really does have all the best tunes, you know - but it was not to be. After a while they rolled up their flags and shuffled off out of the square looking dejected.

On our last night in Heraklion (and Crete, for that matter), we'd planned to sip an ouzo at a taverna we'd found the night before, then go off for what we hoped would prove a memorable meal. Instead, we found the ouzos was being sipped in a square destined that night to be the site of a rock concert in support of PASOK. So we stayed.

After all the usual sound checks, lighting checks, roadie walk-ons, eviction of small children from the stage, some guy from PASOK -presumably the candidate - made a satisfyingly short speech and the band came on. They were terrific and I'm still desperately trying to find out who they were. It might be that they go by the name of the lead singer - whoever she might be - or they may have a band name; I simply don't know. But they put on a storming concert, still going strong at 11.45, when we decided we really must go to find something to eat.

Less of a tourist place, more of a working city, bars and restaurants don't stay open very late in Heraklion, so we had to settle on a souvlaki joint, complete with formica-topped tables and dogged-eared menus.. Four skewers of pork souvlaki between us, with some chips , tzatziki, and pita bread, washed down with cold draught beer. Great.

A free rock concert and a souvlaki meal. Never mind the fancy food in an expensive restaurant. That was a night to remember.

The banana palm? That was drawn from our balcony in Chania.
Posted by harry bell at 18:20 2 comments: