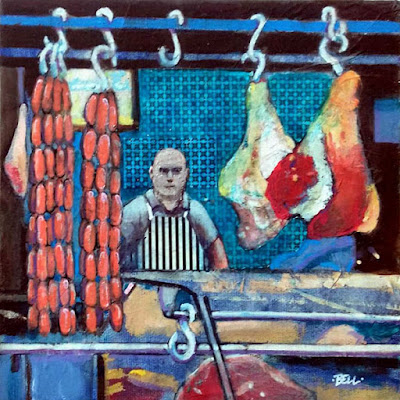 The Greek Butcher
(acrylic and collage on board, 8x8 in)

With all these posts from last year's stay in Crete, there may be a temptation for my Regular Reader to think I've been doing no other work. To set the record straight, here's a painting I completed last week.

The collage element in this one is simply the inside of an envelope used for the background pattern.

It might be of interest if I show the photograph I used as source material. It took me a long time to find out what information I needed to extract from this photograph: 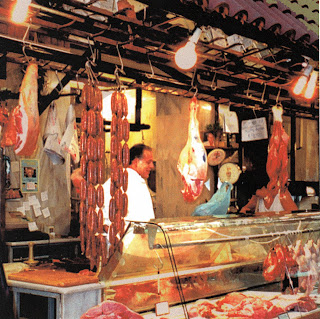 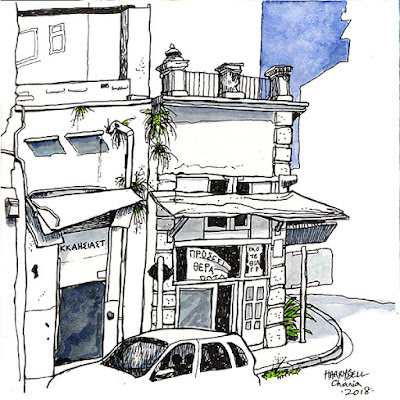 On Kissamou Avenue.(Marker and watercolour in 195x195 mm sketchbook)

Moving away from the historical Old Town, I wandered into the more commercial and, I have to say, rather run down part of the new town. Kissamou Avenue is a very busy main road running out of town and just crossing it needs very careful timing but it led me to some lovely dilapidated properties.

When I started this drawing, there was a motorbike parked in front of the building. By the time I got to the bottom part of the drawing, the rider had driven off and a car had arrived and parked. Such are the difficulties of urban sketching.
Posted by harry bell at 17:23 No comments: 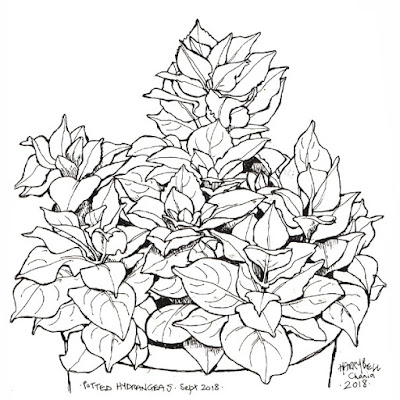 Feeling a little lacking in energy, I decided to sit in the sun on our apartment's patio area. I can never sit still for long without wanting to do something, however, so I thought I'd draw the big pot of hydrangeas near me.

I started in the middle and gradually worked outwards. There's a kind of meditative tranquility that takes hold of me whenever I draw something that needs careful observation like this. Everything else ceases to exist.

I hadn't used my Art Pen in a long time because it had clogged up, but I thought I'd found a way to clean it out and really enjoyed using it again. Unfortunately, when I was done, there was ink all over my fingers and I had to retire it from use again.
Posted by harry bell at 18:47 No comments: 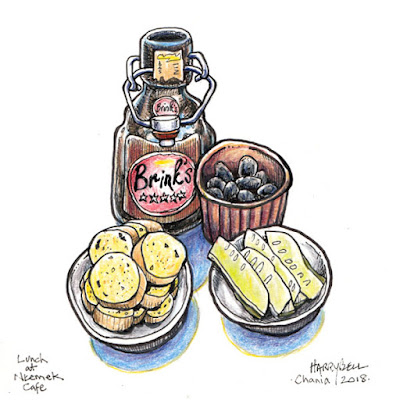 On a walk along the bay with Pat, we decided to stop for lunch at Ntemek Cafe. Sitting out front we could look across at the Mocenigo Bastion and enjoy our olives, slices of cucumber, and garlic bread, washed down with Brink's Rhethymnian Dark.

Pat was very patient and understanding in allowing me to draw the meal before we could eat it, but most of the colouring had to wait until we'd done.
Posted by harry bell at 19:09 No comments:

Two Months in Crete : Sketch - On the Walls of Chania 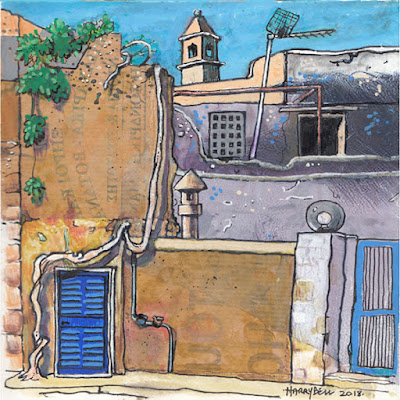 On the Walls of Chania
(mixed media in 195x195 mm sketchbook)

I went out onto the road along the Venetian wall again, but this time I'd made preparations. The sketchbook page was collaged with some pieces of brown paper bag and fragments from a magazine whose colours I knew ought to correspond to a house I had in mind to draw. I also had a folding stool so I could sit in the shade at the side of the road while the groups of tourists passed by on the other side.

Things went well; the colours worked just as I'd hoped and with watercolour, coloured pencils and markers I got what I wanted from the subject.  Just as I was wondering if there was more I might do, a man drove up and parked his car in front of me, then covered it with a tarpaulin, completely shutting off my view. I decided it was time to go, so stood up, but somehow I put pressure on one of the three legs of the stool, it bent and collapsed and I rolled around on my back in the dust.

Thankfully, the car driver had gone and there was a gap in the groups of tourists, so my embarrassment was a private affair.
Posted by harry bell at 17:17 No comments:

Two Months in Crete : Sketch - The House with Good Connection 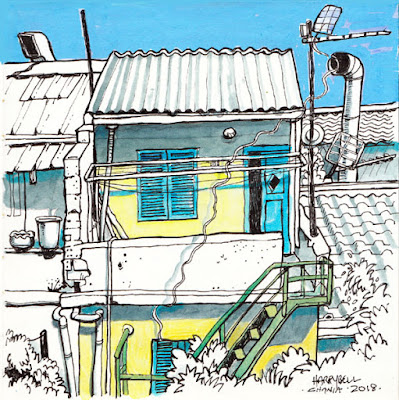 A road runs along the top of the Venetian fortified walls near our apartment and I knew I wanted to draw some of the buildings that can be seen from that road. I've always liked being able to look down on buildings or get a view of the upper stories and this was a great opportunity.

This house was on the street immediately inside the walls. No shade again, so I had to simply stand with my sketchbook resting on the parapet for around two hours, the sweat running down my neck from inside my straw hat. But it was worth it. I was able to include the details of the wires and pipes of the building and I especially loved the cable that ran from the downstairs apartment window up to the tv aerial. Hence the title, of course.
Posted by harry bell at 18:07 No comments: 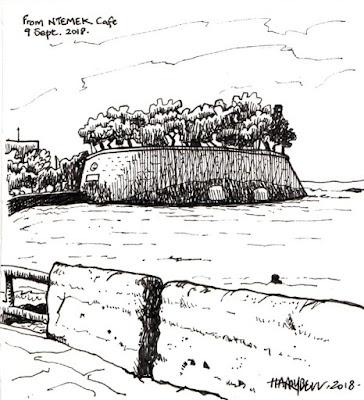 Lunch at Ntemek Cafe, looking out over the bay towards the Mocenigo Bastion. We ate at the Ntemek several times, partly because they stocked the excellent Brink's beer, brewed in Rethymnon.

The bay has a small beach and is popular with local swimmers (you might see one in the drawing).
Posted by harry bell at 17:48 No comments: 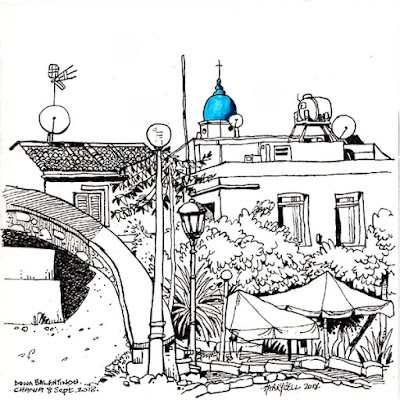 Down Balantinou
(Markers in 195x195 sketchbook)

Balantinou was one of the streets we used most often to walk into the Old Town. It was just round the corner from the apartment and skirted the Schiavo Bastion, built by the Venetians as part of the city fortifications.

On the left of this drawing is a ramp leading up to the top of the Bastion. For about a week after we arrived the ramp was closed off because of a landslide, but the demand from people wanting to get a view of the town from the top soon led to a dismantling of the fence; whether officially or not, who can say?

The landslide had fallen onto the road, which meant it was closed to traffic, so I was able to stand in the middle of the road to draw. In doing so, I was much safer than if I'd stood on the pavement, because that was being used by all the local motorcyclists in the absence of a road.

The taverna canopies belong to the Banana Garden and the blue dome in the background is on the top of the Roman Catholic Church.
Posted by harry bell at 18:01 No comments: