I'm not so convinced of my own importance that I think the organisers of the Threadneedle Prize would single me out from all the artists listed in Axis to invite me to submit to the competition. But I was rather surprised that the message forwarded from Axis inviting me to do so, showed that it was sent to one artist only - me.

Anyway, I've thought about it - as I did last year - and have decided I've nothing to lose other than the £15 per picture and the cost of having them delivered to the Mall Galleries.

Unfortunately, I find that some of the pictures I might have wanted to include - the Prague Trams - won't be taken down from Preston Hall until 14th June. While handing in at London is 22nd June, the regional pick-up from Newcastle is 13th June. Bugger.

So what to do? I think I'll send them a couple of the Vaporetto Series, but have also decided to do a new one specially for the show. It's based on some photographs I took of the little wooden train at Soller, Mallorca last year and will form a sort of coda to the whole transport thing that's been preoccupying me for the last year.

I started it today. Everything else will have to take a back seat until it's done.
Posted by harry bell at 13:44 3 comments: 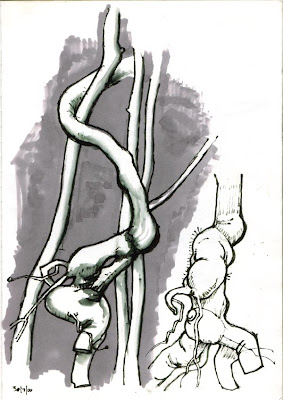 I had a really enjoyable afternoon out yesterday. Mo and I went up to the Fi-Fie-Fo-Fum gallery at Newton; the weather was glorious and the views round the gallery are spectacular. The views inside the gallery are pretty good too.

Tom Moore had invited us to see the big new paintings he's working on for his upcoming show at the Northumbria Gallery, partly for reassurance that they were on the right track (they definitely were!) and partly just for a chat, I think. I know only too well how isolated life can become working in the studio day after day.

During a very wide-ranging conversation, we touched on the way the Laing Art Gallery in Newcastle had taken down the lovely paintings on the staircase when they repainted the walls and disappointingly never put them back.

Tom has discovered the reason. It's that old demon, Health & Safety!

Apparently, should there be a fire, the public would be in severe danger of being caught by burning shreds of masterpieces raining down from the walls of the staircase. In an art gallery! Who'd have thought such dangers existed? I've been risking my life all these years and never knew.

I wonder if the owners of stately homes know what perils they live with as long as they have their ancestral portraits lining those grand - but potentially lethal - stairs.
Posted by harry bell at 13:14 4 comments:

My thanks to Chris Bellinger for his link to a wonderful slideshow of Barbara Rae's paintings:

But I wonder: are those at the end in the coloured frames really hers? If so, they're something of a departure.
Posted by harry bell at 09:40 6 comments: 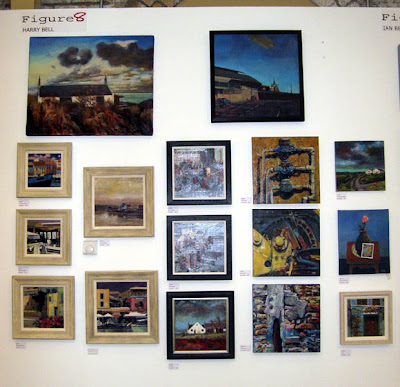 My part of the Figure8 pitch

Although the first day of the Art Fair started out bright and sunny, it soon clouded over and the hordes of punters simply didn't turn up. After a while, just sitting around becomes very tiresome, and there's only so many times you can get up and walk around the table.

We'd been told that the Museum at Woodhorn received about 1000 visitors a day, but this certainly wasn't demonstrated at the weekend. Considering this was a Bank Holiday weekend - and a sunny one at that - we were lucky if maybe two hundred people came through the Art Fair building in the three days it was open.

Things started to look bad when we arrived for the first day of the Fair to find that the spotlights were all directed onto the floor rather than the walls where the pictures were hung. Requests for someone to come and alter them were met with the advice that "only the Caretaker is allowed to do that and he isn't here today. He was here yesterday when you were setting up, however". So that's alright then.

It became very clear that there'd been next to no advertising. The organisers claimed that, by keeping the cost of display panels as low as possible, they'd been restricted in their advertising revenue. But some advertising costs nothing. For instance, searching for "Northumberland Art Fair" on Google produces as the second hit, a link to my own ArtSlant entry for Figure8's stand at the Art Fair!

There were no signs or banners in the area round about the Woodhorn site or, indeed on the Woodhorn site. On the door of the building where the Art Fair took place, instead of a big sign announcing our presence, there were a couple of notices directing people to another building where a Recipe Book Project was taking place. A little research showed that there were no similar notices on that building informing people of what was going on in our building.

I spotted about half a dozen sales during the event, most of them in the £35 - £65 range. From talking to visitors, it was quite evident that those who wandered through the hall had no idea that the Art Fair was being held - they'd just come to the Museum for a day out.

There was a questionnaire to fill in at the end to assess pitch-holders' views. I'd like to have been a fly on the wall when they were read.

The most difficult question to answer was "What did you like most about taking part in the Art Fair?" After some thought I put, "Apart from comparing complaints with the other pitch-holders, I can think of nothing."
Posted by harry bell at 12:22 8 comments: 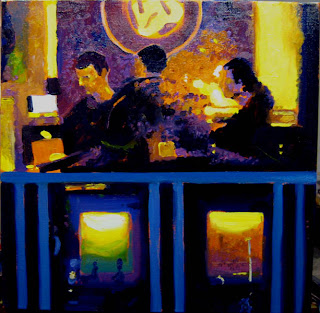 I'm still lost in a turmoil of preparation for various events, not least the Northumberland Art Fair this weekend. However, I was determined to get something done today, so, finding a couple of hours to spare, I determined to see what I might get done in that time.

This is the result. It's based on an old photograph I took through the window of a Costa Coffee outlet in Newcastle one night. It shares the rectilinear compositional device in the lower half that the Prague Tram series employed and that seems to be developing as an ongoing interest.

There's a little more to be done, but not a lot. One more session should see it done.
Posted by harry bell at 20:18 1 comment:

Parcelforce lets me down

I used Parcelforce to deliver my paintings to the Lloyd Gill Gallery. This is the third time I've used them and the previous two times I found the service relatively satisfactory. I did have to call them on the first occasion when they failed to turn up to collect the parcel within the "window" I'd given them, and sure enough the same thing happened again this time. The advice I was given when I phoned up was that the "window" is only a guideline.

Leaving aside the relatively pointless idea of offering a window which can be ignored, what has annoyed me this time is that although I paid for next day delivery, the parcel, which was collected on Friday, was not delivered until today. This, despite my having paid an additional £12 premium for a Saturday delivery.

I've asked for a refund. We'll see what happens.
Posted by harry bell at 12:12 2 comments:

Blimey, I've been quiet, haven't I? It seems that a great deal has been going on, but none of it found it's way into Boogie Street. A lot of it was just stuff, not lending itself to writing about, but one or two things should have been mentioned.

Most importantly, especially as I sit here waiting for the Parcelforce man to turn up, is the invitation to show some work at the Lloyd Gill Gallery in Weston-Super-Mare. I know, Weston-Super-Mare! You can't get much further from Gateshead, really, but one of the wonders of the Interweb is that people who might otherwise not see your work get to do so. This invitation is down to my exposure on Flickr.

Lloyd Gill, the Director of the gallery, selected the following paintings for showing in the upcoming show, Earth-Water-Concrete-Steel-Brick: 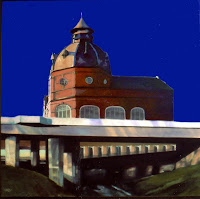 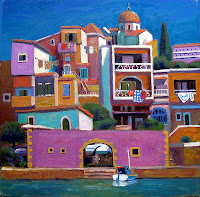 The exhibition starts on 26th May and runs until 19th June. If you live in the area, why not drop for what looks an enjoyable show? Sorry I can't be there to talk to you.
Posted by harry bell at 13:37 6 comments: 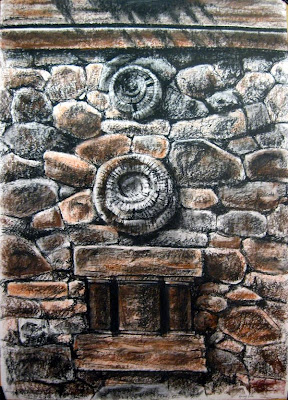 There are so many things needing my attention at the moment, that posting an Old Drawing seems the best way to keep blogging.

I found this wall in 1996 in Lyme Regis, a town famous for its fossils. I liked the vertical arrangement so much, I had to do a drawing.
Posted by harry bell at 15:32 2 comments: 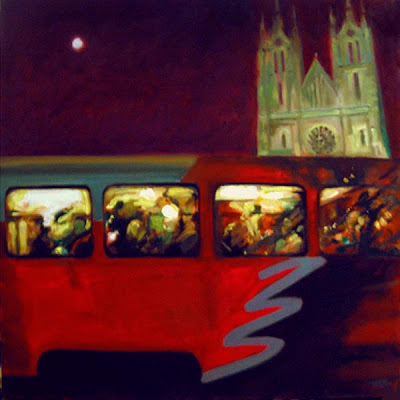 I must try to get a better photograph of this painting, but when I took this one, the paint was still wet and terribly reflective. Coupled with the tendency of this monitor at least to do strange things with reds, this may not be too representative of the work.

The show opened at Preston Hall on Saturday. It was a fine sunny day and there was a garden show open in the grounds, so the awful possibility that no one would come to look wasn't fulfilled. There was a respectable trickle of people walking through the exhibition space. Admittedly, some were simply walking through to see where the door at the other side of the room led (nowhere), and others were looking for things to keep their kids amused; or the opposite - "Come away, Tracey, it's only some paintings!" And as usual, there was the sniggering as fingers were pointed at the prices on the labels - "£400!"

But overall, the response was good and I was pleased to be told how much some people liked my trams and how two of them - Nos.1 & 2 - reminded one person of Edward Hopper. I told her I was a big Hopper fan and she said, "Me too, but now I'm a Harry Bell fan as well".
Posted by harry bell at 12:30 4 comments: