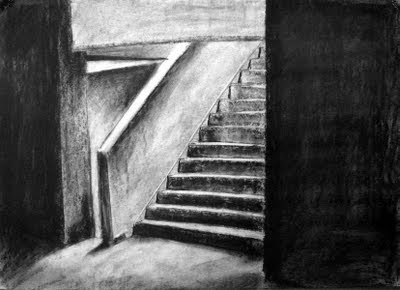 As I'm still in Sorting Out mode, I'm not getting anything done to show you, so I may have to resort to showing Old Drawings for a while. Not such a bad thing, as we've reached the point in 1997 where I went to Newcastle University to start my BA (Hons) in Fine Art. As a result, there are quite a few drawings from that period.

The course was a four year course (rather on the model of the Scottish art colleges) and the first year was designed to bring everyone up to a similar level of ability. There were periods of drawing, sculpture and printmaking and this first exercise sent us out into town to make drawings of urban architecture, with a view to making sculpture based on the drawings. 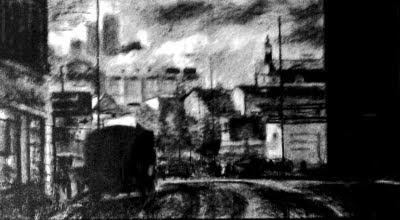 This must have been one of the last drawings I did before starting my BA (Hons) course at Newcastle University in 1997. The quality of the photograph is a little compromised because the drawing was sold and is now under glass, so the image has been Photoshopped to try to remove excessive glare.

In the background of the drawing is the Newcastle Brewery, which dominated the Gallowgate area of Newcastle for many years, but which was demolished in 2008.
Posted by harry bell at 10:09 2 comments: 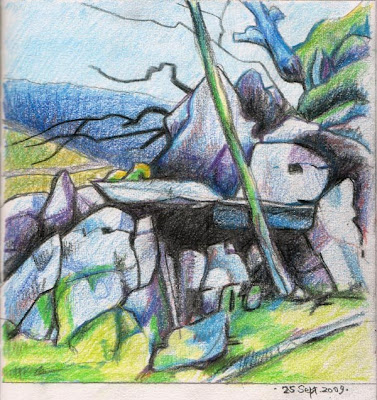 In an effort to stave off that expected flat spot, I thought I'd explore a possible addition to the Rock & Tree paintings I'm working on at the Club. This is based on a photograph taken of the same rocky outcrop in the Lakes as the paintings are based on. I think it has great potential, but I need to decide on the size of canvas before I make any start on it.
Posted by harry bell at 01:13 No comments:

Last night, Figure8's new show opened to great acclaim. This was quite possibly our best attended preview ever, with some famous faces scattered amongst the crowd, and everyone seemed to have a good time. We should perhaps have had a photographer there, because all in all it was quite an elegant occasion worthy of recording.

Special thanks go to all my friends, especially The Groupies, who helped make it such a successful evening.

Where do we go from here? I dunno. There are no new shows planned and although the comments on my work were all positive, I always feel the need to retrench and consider what I want to do next.

At the Club there are two Rock & Tree pictures I want to complete. But maybe I want to work small after those big Views from the Keep. I have a few small paintings crying out to be finished and a number of ideas which I think would benefit from being ensmalled.

Meanwhile, I'll relax a little, I think, and remember - the show at Red Box continues until 20th November, so if you're in the area, make an appointment to look in and see it.
Posted by harry bell at 14:49 4 comments: 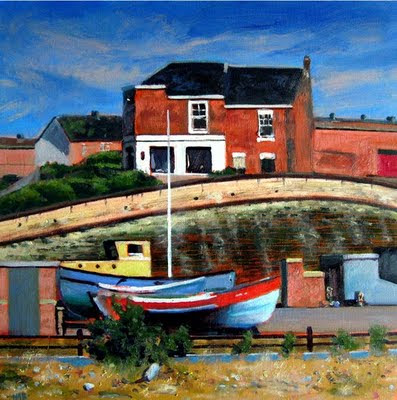 I don't know why it's taken so long to finish this painting, except that I had other fish to fry. It took only the addition of the boat mast and some other adjustments to get it done.

The Free Trade Inn is one of Newcastle's great pubs, serving real ale and providing a stunning view up the Tyne.
Posted by harry bell at 14:11 2 comments:

Pat and I always try to walk around the area we're holidaying in. It's an opportunity to get to see something of the country many tourists never bother with. After breakfast one day we walked east out of town to Park Boder. Little waymarked paths led us to the top of a hill where we found ourselves in a huge concrete arena: 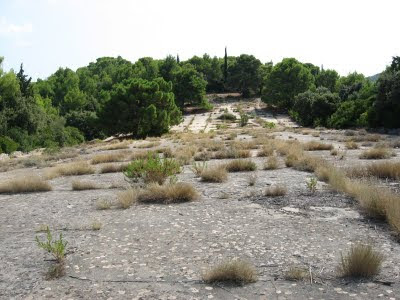 We couldn't work out what it might be used for. There were no roads to reach it, it was too uneven for anything other than maybe a helicopter landing field. But no helicopter would land where there were no roads or even decent paths. At one side (on the left in the photograph) was a concrete drain to take away surface water from the concrete field. The drain was blocked and the filed was obviously abandoned long ago, trees and shrubs thrusting up between the huge concrete slabs. What was it for? We were at a loss, although wandering through it gave a distinct sense of modern archaeology.

As we were about to leave, a man pushed through the bushes at the edge of the field and strode off to the other end. It looked as if he'd gone out at the other end , although we'd been unable to find another path at that end. We decided to follow him, but as we approached ht other end of the concrete field, he came back onto it. He nodded as he went by, so Pat asked if there was a path. He said there was but it wasn't good underfoot and made to stride off again (I think he was power-walking, actually). Before he went, Pat - ever the pro-active one - asked what the field was for. In halting English he explained: when it rained heavily the water would collect on the concrete and be led away through the drain to the town below.

What a great idea. And a lesson in lateral thinking. The drain wasn't a by-product of the field, put there to deal with the consequence of water collecting on the concrete, but an integral part of a water-collection system.
Posted by harry bell at 13:19 No comments:

Back from the Balkans 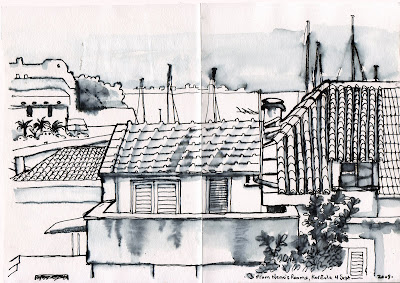 What a fascinating place Croatia is. Or at least the bits we saw of it. Three nights in Split turned out to be not enough. It's a lively urbane city, built around and incorporating Diocletian's Palace. At times it reminded me of Venice, at others of Greece, and it was a pleasure to wander its little side streets and cafe-adorned squares, or sit out on the Riva and watch the world go by.

Despite Split's busy atmosphere, from our apartment we could easily reach the Marjan peninsula and walk through its wooded park; it felt for all the world as if most of civilisation was a hundred miles away.

Before we left Split, we had time to visit the Mestrovic Museum - a striking building filled with Ivan Mestrovic's sculpture. I loved them: very Expressionist at times, but also showing influences from Pre-Classical to Michaelangelo.

From Split we took the (amazingly cheap) ferry to the island of Korcula, and stayed in Korcula Town for seven nights. One of the great delights there was to find a terrific Tintoretto in the Cathedral. Newly restored, it glows with the most astonishingly vivid colours.

We also found a small gallery run by the painter, Hrvoje Lorenzo Kapelina. I loved his work and managed to get to meet and talk to him for a short while. A pleasant unassuming man, he told me he likes to do much of his painting during the Winter, so that he can "make the Summer last as long as possible." Eventually I bought one of his pictures - a rare event for me these days - and as Autumn claws its way across England, it's a real delight to be able to look at a little piece of Korculan Summer.

From Korcula, we took the ferry back to Split, then a bus to Trogir. Trogir is a UNESCO World heritage site, a town of twisting alleyways, and buildings of infinite variety - Romanesque, Gothic, Renaissance and Baroque. And nearby are the Kastelas, an astonishingly quiet riviera based on seven small castles whee we spent two days walking in tranquility.

The drawing muse visited me only once, when I sat on the balcony at Korcula and drew the view. It's a bit of a wobbly drawing, but it'll do as a reminder of a wonderful holiday. On the bus to the airport, we met a woman who invited us to stay with her in Pula, further north. She reminded us of the local 3rd C. relief depicting the Greek god of opportunity. You must grab him as he comes towards you, because the back of his head is shaved and after he's gone past, you'll find him very difficult to get hold of.
Posted by harry bell at 13:30 1 comment: