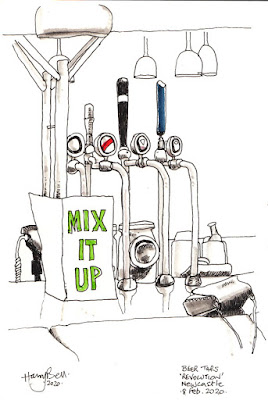 Beer Taps at Revolution
(markers in A5 sketchbook)

On Saturday, I went on my first Sketch Crawl of the year (and my first for quite some months) with Urban Sketchers Tyne and Wear. Although the others had started at the Subway cafe at the cathedral end of Collingwood Street in Newcastle, I met up with them after they'd moved along to Revolution, a vodka bar at the other end of the street.

We'd been granted the exclusive use of a row of stools and tables but I found when I was finally perched on my stool (does anyone else find bar stools the most uncomfortable form of seating?) that left me with only two subjects for drawing. I could draw Colin who was sitting sketching across the small table from me, or I could draw ... some beer taps. I decided Colin would prove the more interesting (how about that, Colin? More interesting than a row of beer taps!) but just then the food he'd ordered before I got there arrived and he became decidedly more animated. I like to draw people who I reckon will remain relatively immobile and while Colin was that while he sketched, he moved about quite a bit when presented with a sandwich.

I drew the beer taps. A man with a cap and a girlfriend sat down in front of them and I almost began drawing his cap, but luckily they both got up again. As I was finishing the sketch, two girls sat down and I was able to include a handbag which I felt helped to balance the composition.

As the noise from partying girls began to get uncomfortable, we decided to return to the Subway cafe. I wasn't inspired by the view, so ate an uninspiring vegan and aioli wrap and chatted to Mike about the things that concern aspiring painters.
Posted by harry bell at 20:18 2 comments:

Late for the Match 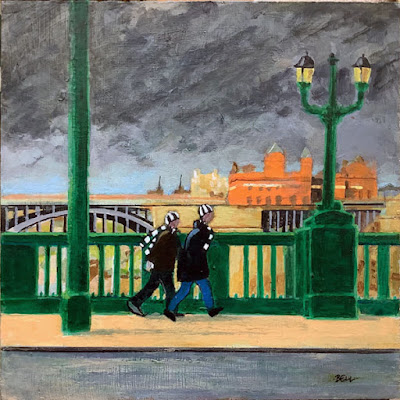 Another painting going down the Northern School route. Two Newcastle United fans, complete with black and white scarves and hats, hurry across the Tyne Bridge from Gateshead to Newcastle to see the Toon Army play. There are no more loyal fans than NUFC fans and the owners don't deserve them.
Posted by harry bell at 09:30 No comments: 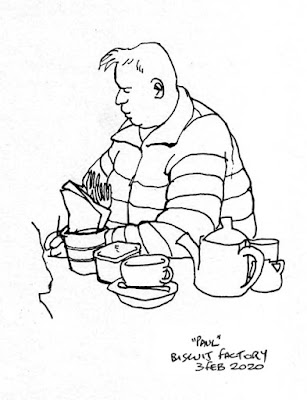 Paul at the Biscuit Factory
(0.5 marker in A5 sketchbook)

There's a new gang of urban sketchers in town. Colin H has organised a weekly outing for his friends to go out sketching on a Monday with the idea, I guess, as my Mother would have put it, to "get the smell blown off you." He kindly invited me too.
"Meet at the same time," his email said.

"What's the same time?" I asked, not unreasonably.

"The same time as last week, of course."

"I wasn't there last week".

To his credit, he apologised and gave me the information.

Anyway, a nice day out was had, despite the furious winds, with the Mondaymonday Sketchers at The Biscuit Factory. I couldn't see anything from the balcony because of the people in between, so I drew Paul.

Then I drew Trudy. 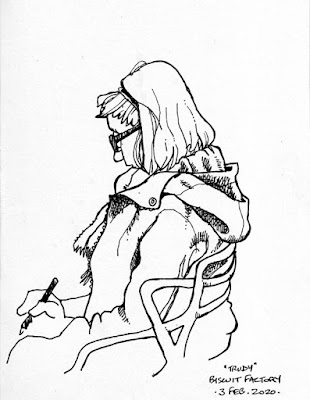 Trudy at the Biscuit Factory
(0.5 marker in A5 sketchbook)

It felt good to have made some marks on paper again, but by then I'd drawn everyone within range and the wind was getting colder, so we retired to the cafe for coffee.
Posted by harry bell at 18:11 No comments: 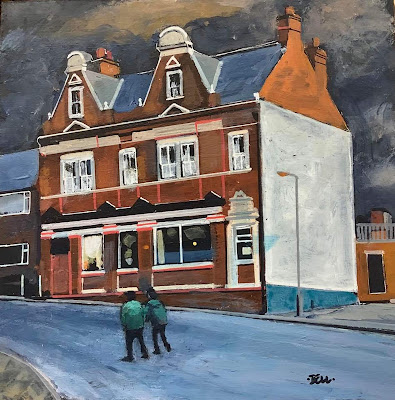 A New Year dawns, one in which I fear for the safety and prosperity of my country, so  I wish you, my Regular Reader, the best you wish you yourself. Here's tae us!

Dispiriting though life may occasionally seem, there is always Art to see us through. This is a painting I finished late last year. It reflects my fairly recent interest in what I find is called the Northern School, a style of painting unashamedly derived from that of  L. S. Lowry. I'd rather dismissed it in the past as the "Flat Cap & Whippet School" and I do despair sometimes at the proliferation of paintings of miners going to the pit painted by people who clearly are far too young to remember such things. Ersatz Norman Cornish.

However, I've always had a liking for the grubbier parts of town and the interesting vernacular architecture of pubs in the area I grew up in. It's not nostalgia: I don't want to go back to the Good Old Days, which really weren't that Good. In the 1980s I took some photographs of old pubs, many of them now either demolished or put to different use, and The Fighting Cocks is one such. It used to be a boozer in Newcastle, but has subsequently been converted to (I think) a design practice, with a glass extension added to the end wall.

I really like the grand frontage and thought I could make a successful picture out of it, as I did with The Portland and, to a lesser extent, Burton House. In the past, I would never have included figures, but as I grow older, my memory starts to fill these scenes with archetypes and it seems only right to put them in my pictures.
Posted by harry bell at 20:11 3 comments: