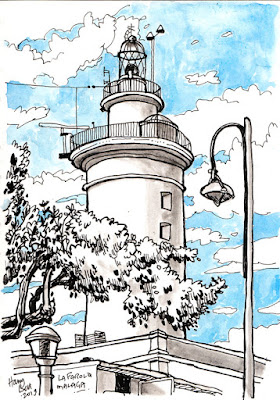 La Farola, Malaga
(Markers and watercolour in A5 sketchbook)

Moving on to Malaga, I looked for something new to draw, but eventually settled on drawing the lighthouse again. I'd drawn it on my previous visit but opted for a different viewpoint, sitting among the bins and litter outside the gents loo. Who says an artist's life can't be glamorous? 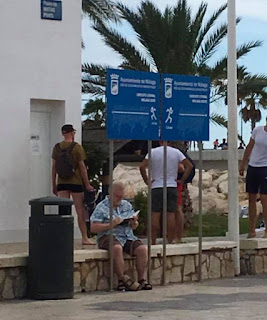 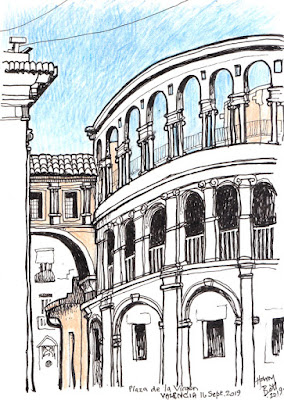 We spent three wonderful weeks in Spain in September; two in Valencia and one in Malaga. The choice of cities was in part due to the convenience of flights from and to Newcastle and, in the case of Malaga, because we'd been before and liked it.

Valencia is a beautiful city that proved really difficult for me to draw. The buildings are impressive but also very tall, so that the parts that I found most interesting were inevitably at the top and there was no way I could either get up to their height, or find a spot in crowded streets where I could easily sit and look upwards.

I did at one point consider doing some drawings of  the really exciting modernist buildings by Santiago Calatrava at the City of Arts and Sciences, but realised that, in effect, the designer had done all the work for me - everywhere I looked was a great composition!

Determined to come away from Valencia with at least one drawing in my sketchbook, I sat with a drink in the Plaza de la Virgen and drew this part of a square where all the world comes to mingle and take selfies in front of the fountain.