And One Makes Four It's time to return to the Holy Island sky pictures and move them along, but I always feel three in a series is never enough, so yesterday I began a fourth.

The plan is to complete all four by the end of the week, so over the next few days they should all be appearing here. Watch this space.
Posted by harry bell at 12:09 2 comments: 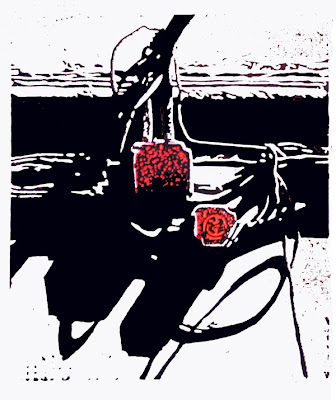 At a dinner party on Saturday night, the conversation turned to a linocut hanging on the dining room wall. It was one of mine given to the hostess some years ago. My attempts at printmaking and linocuts in particular are very rare and this one was completed while I was in my second year at University (1998). It was never properly editioned, so only a very few artist's proofs exist.

Which poses something of a problem: one of the other guests said she'd like to buy a print. I've never sold a print before. How do I arrive at a fair price? Should it be based on a drawing of that size (which I have sold), or should the rarity value influence the price?
Posted by harry bell at 10:41 3 comments: 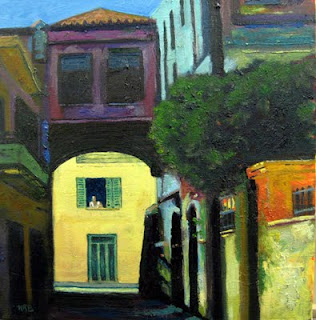 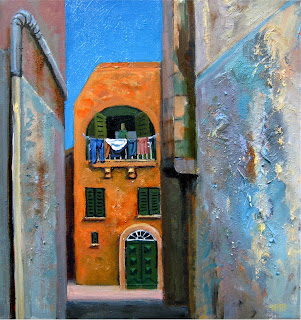 I got my first look at the Art Club's new premises yesterday. Last Friday, I submitted these two paintings to an inaugural show at the new place, so I went along to see how they looked.

The exhibition is in a room next to the new studios. Not a very big room, so there had to be some selection of paintings., and my two were hung one above the other (as they are shown here). Not an arrangement I particularly like, but I suppose it's better than not being selected at all.

The new studio is going to pose some problems when it's up and running properly, because it's around half the size of the old studio in Bolbec Hall. It really is a shame we had to move, but our situation there had become absolutely untenable in that we could have been evicted at any time with only a month's notice.

There is no natural light in the new room and it seemed a bit stuffy, although there is an air extractor (not switched on yesterday). The other room has been set aside as a community room with the fridge, library and large table. It can be used as a room for drawing, but not drawing with friable materials like charcoal or pastel as it's carpeted and the owners don't want the carpet ruined. So only of limited use in that respect. There are large windows in the community room and I made sure they could be opened to let in some much-needed air.

There's no doubt the change will take some getting used to, but I dare say we'll rise to the challenge. As the only art club in the area which has always allowed members access to their studio five days a week, it has a lot to live up to.
Posted by harry bell at 12:30 7 comments:

By Wednesday I'd come to the conclusion the weather wasn't stable enough to warrant lugging out a lot of the equipment I'd taken with me. In fact, I'd settled into a realisation that I might as well make the most of being away from home, living in a comfortable country house with no pressing commitments. In other words, I was on holiday.

I spent Tuesday getting to the end of The Blackpool Flyer by Andrew Martin, the second of his Jim Stringer, Railway Detective, mysteries. I'd enjoyed the first of this series, The Necropolis Railway, but the second seemed to me to be terribly padded out. Clearly Martin has done a huge amount of research and felt that he might obscure the identity of the culprit by filling the narrative with details of Victorian life. Undeniably fascinating details, no doubt, but narrative cloggers nonetheless. As a result it's taken me months to get to the end.

Wednesday afternoon promised a spell of fine weather, but no sooner had I finished this two page drawing (and in the process become a real fan of the flexibility of the brush-pen) than the rain came back. 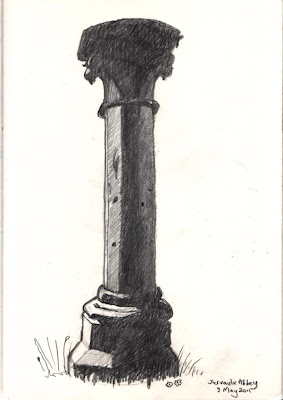 The weather forecast looked promising, so rather than work close to the house, we decided a trip to Jervaulx Abbey might prove productive. We collected essential supplies from Dales Meat & Pie in Leyburn (Scotch pie disappointing, tartelette chocolat fantastic) with the intention of getting tea from the teashop at the Abbey. Teashop closed "due to unforeseen circumstances". Tsk.

I was sure the Abbey would be an exciting site, but it turned out otherwise. It's difficult to say why. I've always loved ruins, but perhaps these were too manicured or perhaps my inclination really is towards industrial ruination. Whatever the reason, I found I couldn't make sufficient sense of what I saw there to do a substantial drawing. I took quite a few photographs and as I did so I could see that I might be able to eventually put together a composite view which, while not being accurate in its depiction of the Abbey, would be a decent painting composition.

The rain kept coming and I had to eat my lunch in the shelter of an archway, so eventually I simply sat down on a broken step and drew one of the pillars. It seemed to be sufficient.

Or almost sufficient. I made this little sketch and then the rainclouds became very black again. We ended up running for the cars. 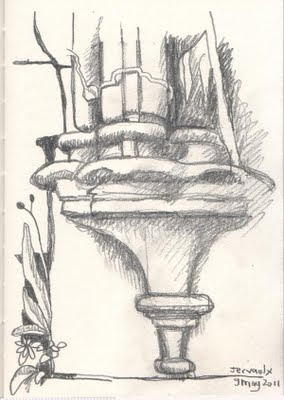 Fragment (2B mechanical pencil, A5 sketchbook)
Posted by harry bell at 12:01 No comments: 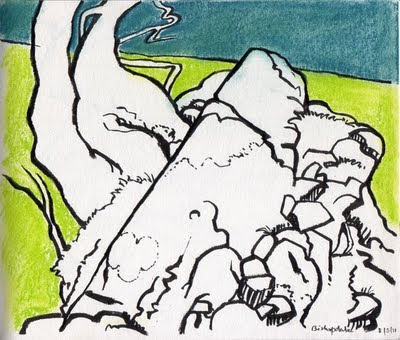 Rain had sent me back to the house after drawing the Tree with Green Head and it seemed set for the rest of the day, but when a break appeared that promised a reasonable time of clear sky, I set off for my newly discovered Rock & Tree.

I began with a futile attempt to work with my favourite Rotring Art Pen. The nib has dried up again. [Note to self: check your materials before going away again!] Back to the Brushpen again then and this time I began to find a new pleasure in its use. There's a nice fluidity about the way it handles and quite subtle changes in the line quality can be achieved.

I think I intended to give this drawing more colour, but the black clouds were moving my way so after quickly laying in two colours of Conte to push the subject forward, I ran for the house in the beginnings of a downpour.
Posted by harry bell at 11:36 No comments:

Rookery Time - Sunday 8th May (am) 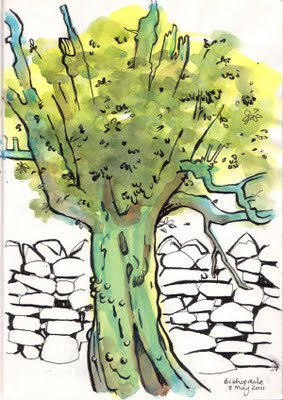 It was becoming clear that the weather was going to be unstable, with sun and showers appearing from down the valley in unpredictable waves. I walked back up the hill towards the waterfalls but stopped part way there to draw this tree. It's another I'd become interested in last year but as we were here a couple of weeks later than last time, a crown of new leaves had shrouded the head of the shattered trunk.

Drawing this was particularly difficult. Sometimes you should make the decision to try something else and come back when the conditions are more favourable. Instead I pressed on, staring into the subject with the sun behind it and in my eyes, the watercolour drying as soon as I put it on the paper. My intention had been to lay down the watercolour and then draw into it with a disposable fountain pen, allowing the water soluble ink to spread into the colour. As it turned out, the ink had congealed and become a kind of black stringy glop, so I had to dispose of the disposable pen, and turn to the brush-pen.
Posted by harry bell at 11:20 No comments: 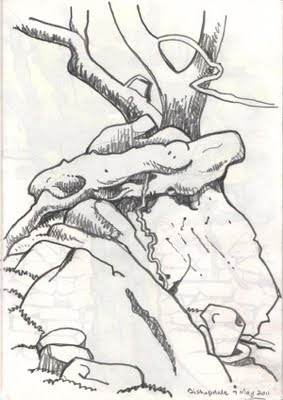 Walking up to the waterfalls involved a lot of very boggy ground and several rotting gates held together by pieces of string, twisted wire and rusted metal. I think it must be a Yorkshire thing. I decided to forgo the pleasures of opening the gates and decided to take a walk in the afternoon along the lane that runs down the side of the valley through flocks of sheep.

I'd never been that way before and it came as a shock to see, on the top of the first rise, a fascinating example of my favourite country subject - Rock & Tree. Coming closer to it, I was amazed by it's structure. It's a huge boulder out of which an ash tree has sprouted, pushing roots deep into a crack on one side. But then, the tree had produced a root-cum-trunk which had wound it's way round the rock and along the other side, grasping the rock in its embrace.
Posted by harry bell at 10:51 No comments:

Rookery Time - Saturday 7th May (am) 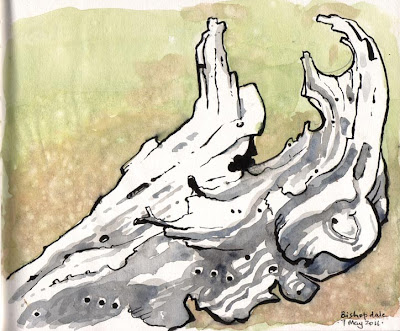 Although of course I've known for a long time that I was going on my annual painting week, the opportunity to say so seemed to evaporate all of a sudden, so I went without letting you know.

So now I'm back and ready to post the fruits of my labour. Like last year we stayed at The Rookery in Bishopdale, so I had a fair idea of what I might find to interest me round about. Climbing up the steep hill that rises at the back of the house, I made my way slowly (the hill seems to have become steeper in the last year) to the series of waterfalls running down from the scar.

Sure enough, the dead tree I'd seen last year was still there, though in a more advanced state of decay, the insects and fungus continuing their long project of destruction. I love the way the tree resembles a dead creature lying on it's back, it's maw wide open. An echo of Paul Nash.

We were lucky with the weather that day but the cold wind blowing up the valley meant that the sun was less effective in keeping me warm, so by the time I'd put on the watercolour washes I was ready to go back down for a cup of tea.
Posted by harry bell at 10:15 2 comments: 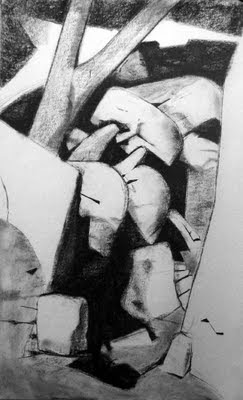 As those of you in the UK will be only too well aware, we're going through the Bank Holiday season, a time when nothing gets done because we're all too busy Having Fun.

In the absence of anything new to post, therefore, I'm posting what may prove to be the last of the Old Drawings series (I need to check - there may be one or two more). I need to think about how to replace this occasional series. Something called New Drawings would, in an ideal world, be a suitable replacement, but that's a series very long in the gestation it seems. I could start to post from my sporadic sketchbook drawings. What do you think? What would you like to see?

This drawing, by the way, is one of the first in what would come to be the Rock and Tree series, an ongoing project. I did it at University in 2001, I reckon, and it's taken from something seen at Blawearie. I'm rather fond of the way I simplified the forms.
Posted by harry bell at 11:03 2 comments: