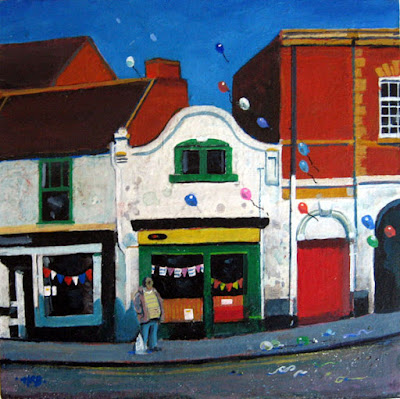 In December I had trouble with very visible Sharpie lines on this panel but solved it with a layer of thin paper. Last week I pushed on and thought I'd finished the painting.

I was a little dissatisfied with what seemed to be simply a street scene with a man standing there with his shopping bag and I'm always acutely aware that the good folk of the North East don't like buying pictures of places they don't recognise and Mint Street is in Lincoln.

My admiration for Carel Weight suggested an addition. In many of Weight's paintings there are mysterious or unexplained events, often taking place out of the picture, and into my head jumped the idea of a passing parade. Hence the balloons.

Oddly, when I showed this picture to my friends at the recent Newcastle Painters meeting, no one noticed the balloons and my little joke was lost. 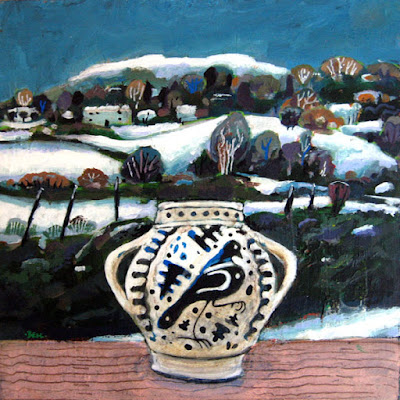 In an effort to get some things done before the next meeting of the Newcastle Painters Group, I pressed on and completed this small winter landscape, featuring another of the pharmacy jars I saw in the Fitzwilliam Museum. The landscape itself is a view of hills in Little Langdale, where I went on one of my painting trips ten years ago. The snow, of course, is pure invention.

I'm really quite pleased with this picture and was glad to find it met with a favourable reaction at the Painters group meeting.
Posted by harry bell at 15:52 2 comments: 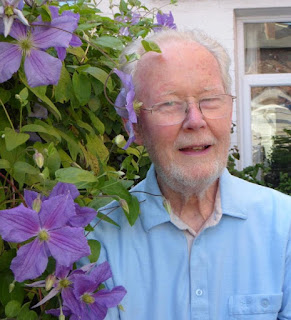 
I'm greatly saddened to report the passing of my old friend and painting buddy, Ian Bennett, who died on 29th of December 2017.


Ian was one quarter of the Figure 8 painting group which we set up in 2004. We had our first exhibition together in that year in the Long Gallery, University of Newcastle and went on to show as Figure 8 in twelve further exhibitions over ten years around the region.

Ian was also instrumental in starting the Newcastle Painters Group and acted as the unofficial "secretary" until last year.

It may have been due to his calling (he was a Canon at St Nicholas's Cathedral in Newcastle - I referred to him fondly as "the loose canon"), but I prefer to believe that it was because he was just a Very Nice Man that I never heard him say a bad thing about anyone. Everyone who knew him liked him.

To the end his greatest wish was to get back to his painting and when his family came to see to his affairs, there was a fresh canvas on his easel.

I shall miss him.
Posted by harry bell at 16:47 No comments: 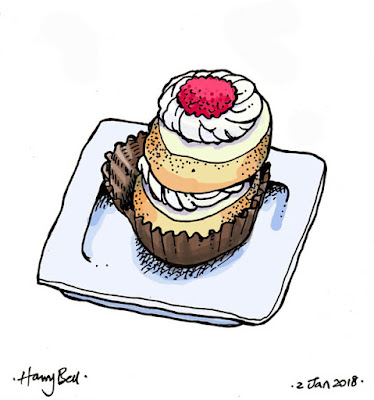 In the last few days I've posted on my Facebook Pages albums of all the paintings I completed in 2017 and all the sketchbook drawings I did in 2017 directly from the subject (on sketch crawls and on holiday).

There were 14 paintings (excluding one or two that need to be re-photographed) and 16 sketches. That's not too many. Last year was a somewhat confused year and it took me quite some time to get into the creative swing of things. Drawing with the Tyne & Wear Urban Sketchers kept me (relatively) sane and there was the displacement activity of the Sketchbook Circle, but it wasn't until June that I began painting again.

I expected to resume oil painting and had bought a new radial easel to ease the transition from my old, larger basement studio to the new, attic conversion studio. But in the end, I found myself renewing my acquaintance with acrylics and working at a desk. Partly this was due to my use of water-based media in the Sketchbook Circle books, partly because I wasn't sure about the white spirit fumes in the smaller studio and partly out of a genuine desire to shake things up and try something new.

I last used acrylics in the late 80s and I was delighted to find how different they are today. I'm so please with the paintings I've done with them that I fully expect to continue exploring what they can do for the foreseeable future.

As for drawing, my sketching with the Urban Sketchers will continue (next sketch crawl is on 27th January - venue yet to be decided) and having dropped out of the Sketchbook Circle for this year, I plan on getting more self-initiated sketchbook work done.

To that end, here's the first little sketchbook drawing of 2018. In the sketchbook it's only a black line drawing, but I still get great enjoyment out of colouring these things in Photoshop. Still, I may try some watercolour on the original in an effort to get more to grips with the slippery stuff so I can use it outdoors.

I hope my Regular Reader stays with me for what I hope will be an interestingly creative twelvemonth. Best Wishes to you all!
Posted by harry bell at 17:24 No comments: