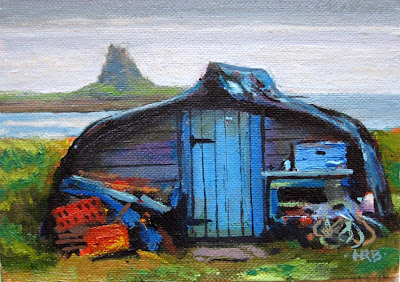 I hope you all had a good Christmas. I certainly did and must thank Andy and Helen for giving us such a great time in Cambridge. And the Boxing Day revels with Helen's folks were much appreciated. Thanks guys!

The secret commission I spoke of a while ago can now be revealed. It was this small painting of one of the famous boat sheds on the Holy Island of Lindisfarne, with the Castle in the background. I did it as a Christmas present for Andy and Helen.

It was interesting working on such a small scale again. When I first started painting, I did quite a lot of paintings on this sort of scale, especially while Northumbria Gallery were running their Small Works shows, but it's been a few years since I tackled one. Doing this one, and reflecting on the increased problem of storing large pictures in the house, has moved me further in the direction of a renewed interest in small works, I think. Hidden away, but lying dormant, is my Other Blog, Art from Tyneside, set up a year ago during a period of interest in the Daily Painters Movement. Maybe it's about time to get that project off the ground. Watch this space.
Posted by harry bell at 09:59 5 comments: 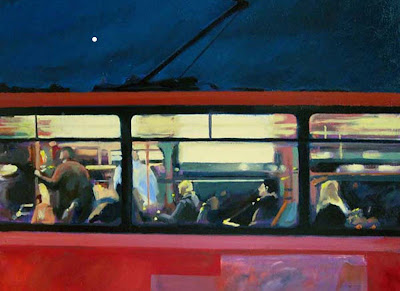 Compliments of the Season to One and All.
Posted by harry bell at 10:02 2 comments:

At last! My website went live today, so I hope you'll think about visiting. No, don't just think about it, do it, go there now, do it without thinking! You know you want to.

I'm still finding my way around the template system provided by Clikpic, and as time goes by I'll be adding more content, but I'm happy with it as it stands. Which doesn't mean I won't be interested in any comments you may care to leave on my doorstep.
Posted by harry bell at 18:32 3 comments: 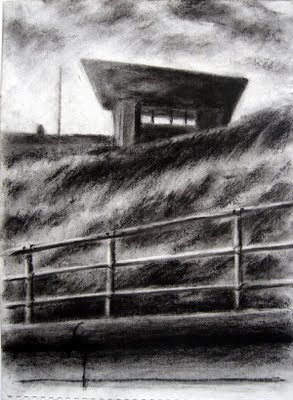 I'm still distracted by various things, so no new painting to show.

On one of many lonely days in the studio at Uni late in 1998, I decided to take the Metro down to the Coast and look for inspiration. It was a cold but sunny day and I walked down the almost deserted beach from Seaton Sluice to Tynemouth. This is one of the drawings that resulted.

Later, I used it to make this painting: 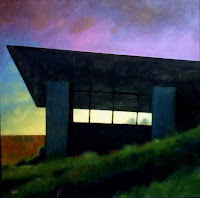 On Wednesday I overcame my reluctance and went to see Damien Hirst's installation Pharmacy at the Baltic. I don't like what Hirst does but thought it unfair to condemn a piece of work without actually seeing it. So I met up with my old mate John and after looking at the entertaining photographs in the Martin Parr exhibition, we walked into the room containing Pharmacy.

It didn't make me angry. It didn't make me curious. I didn't laugh. I didn't sneer. I was completely unmoved. The least I expect of an artwork is that it should provoke some emotion, however slight, and this did absolutely nothing.

This Winter continues to pry my fingers loose from all sense of reality. At the weekend, 29th November, Robert Holdstock died after collapsing on the 18th with what proved to be a serious E.coli infection . He was only 61. I knew Rob when I was active in the world of SF conventions and fandom. I didn't know him especially well socially, but he stands tall in my mind as a fun-loving man who filled every room he was in with laughter and good cheer. As is always the way of these things, I'd recently obtained his email address with the intention of writing to him to catch up and say how much his writing meant to me. I delayed doing so and regret that I can never do it now.

Those of you interested in the SF and fantasy field will know him as the author of many notable sf, fantasy and horror novels, but his talent was to show that genre writing could also be good literature.. Unquestionably, his most significant work is that connected with the Mythago cycle, which began with Mythago Wood (1984). The novel won both the World Fantasy Award and the BSFA Award and was particularly notable for creating a viable fantasy mythos set in the present day, while describing an ancient world of archetypes within an English woodland.

My sincerest sympathy to his partner Sarah and the rest of his family.
Posted by harry bell at 11:02 No comments: