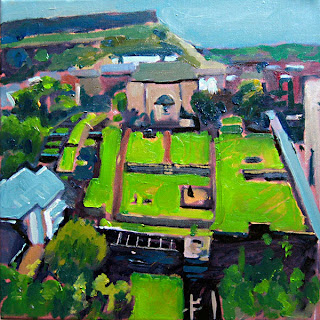 Sorry for the pause in blogging. Pat and I went to Edinburgh at the beginning of the month and I came back with a three-week cold. Writing came a poor third on my list of priorities, after coughing and wiping my nose. And painting stalled altogether until yesterday.

The trip to Edinburgh was a birthday present from Pat and timed to coincide with the exhibition of FCB "Bunty" Cadell's work at the National Galleries of Scotland. A wonderful show! Not a poor picture in the whole collection; his work during the 1920s was particularly exciting yet at the time he didn't find much commercial success with it.

We also paid two visits to the Open Eye Gallery to look at Kirsty Wither's new work. Previously known for her figure paintings and flower still lifes (both of which were represented here), she's recently turned her hand to landscapes and I thought these were really successful. Lovely subtle passages of colour laid on with a painting knife, with some of it scraped through. Gorgeous.

The cold started to show up on the last day in Edinburgh and by the time I was home I was ready to vegetate. But by yesterday I felt I should make the effort to get working again, so went off to the Art Club. Inevitably, the last person there was just about to leave as I arrived, so I spent the afternoon in splendid isolation, working on this small painting which you may remember from its last appearance in August.

I think I still have reservations about the lighting in the studio at the new Club premises. It's a combination of natural light diffused through ceiling panels together with some strip lighting. On an overcast day like yesterday the light coming through the diffusion panels seems poor and I was uncertain of my tones while painting. As a consequence, this painting looks different when photographed in the Club's common room, where the light comes through big windows, than it did in the studio.
Posted by harry bell at 03:04 2 comments: