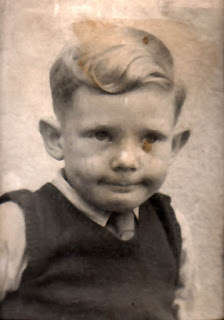 One day, when I was very little, I left one of my toys on the pavement outside our terrace house; within minutes it was gone, probably into the house next door where a family of petty criminals lived. My Mum gave me a good telling off for being careless with my things and I began to learn that not everyone was worthy of trust.

That episode may be the reason I've lost almost nothing of consequence in the sixty-odd years since and why, when something goes missing, I obsess about finding it. Experience has shown that eventually that which was lost will turn out to be that which was mislaid.

The day before last weekend's Sketch Crawl I realised I didn't know where my pencil case was. An old blue one I've had for over 25 years, it contained my favourite pens and pencils. Despite turning over the stuff on the studio floor and searching in several bags, I couldn't unearth it and still haven't.

Perhaps my little anecdote about the lost toy helps to explain the extraordinary effect the loss of my pencil case had on my mood, especially at a time of year when I never feel good. By the time I was due to get ready to go out and meet the other Sketch Crawlers, I'd sunk really low. So I spent the rest of the weekend trying to find the pencil case. A huge pile of papers was sorted and binned and the studio is now in a much better state than previously, but still no pencil case.

I've put together a replacement set of instruments, although I'm going to have to buy a new Pentel Brush Pen, but even now I still find myself looking under chairs, down the side of the sofa, in bags I know I've checked before, in the hope that the familiar blue pencil case will jump out and shout "Surprise!".
Posted by harry bell at 13:36 No comments: 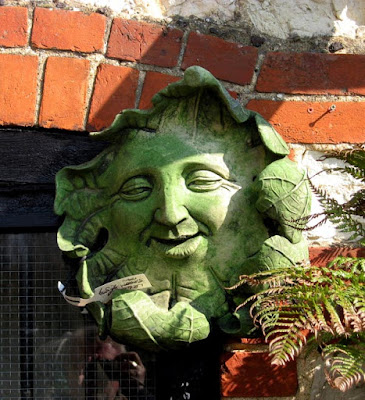 Pat and I were in Surrey and Hampshire last weekend for a rather late wedding present stay at the Four Seasons Hotel. We had a terrific time and I took umpteen photographs which I've hardly had time to sort through. One I did like immediately, however, was this one I took at an antiques shop in Surrey. This has to be the friendliest Green Man I've ever come across.

After our pampering at the Four Seasons we spent a couple of days in the rather more prosaic Premier Inn next to Kings Cross Station in London. Not as luxurious perhaps, but clean and comfortable and really what more do you need?

From there we were able to get to one or two galleries. The John Caple exhibition at John Martin of London was shown to very good effect in their new upstairs premises in Albemarle Street and the staff there were, as always, very welcoming. I've yet to determine how Caple gets such creamy whites (just like flake white oil) in his acrylic paintings, but they're lovely.

For me, one of the highlights of the V&A's Botticelli Reimagined was Bill Viola's Going Forth by Day. I'm not usually one for an art video installation, but Bill Viola really is The Man for those. Inspired by Botticelli frescoes, the video simply shows people of all ages and races walking down a path in a sun-dappled wood. Walking in ones and and twos, and in groups, they walk slowly from the left edge of the very long image and leave at the right.

They're dressed mostly quite casually, some of them in sports equipment, and many carry objects - sports trophies, musical instruments, flowers in pots and bunches, suitcases - and the speed of their walk has been slowed by a fraction.

We didn't intend to watch the whole 36 minutes of it but we were drawn in by its mesmerising quality and didn't leave until the old guy with the walker came round again.
Posted by harry bell at 16:10 No comments: 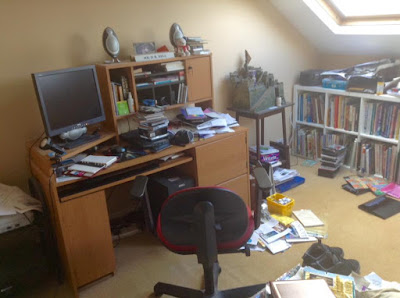 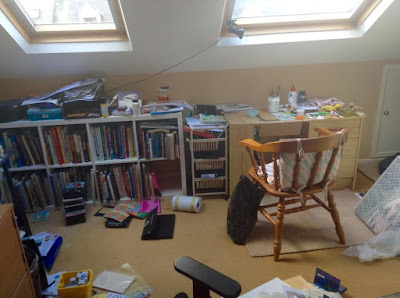 A weekend of clearing shelves, moving furniture and replacing books on shelves has resulted in this new configuration of the studio. I'm much happier with this layout, especially now the desk has moved from the corner to the bigger skylight.

Some of the lighting is still only temporary; and then there's the stuff accumulated in a pile in the middle of the floor which will need sorting out. But hey! I can now walk round it! 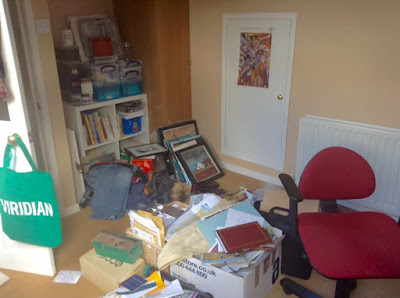 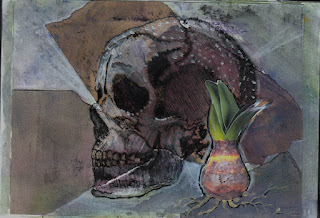 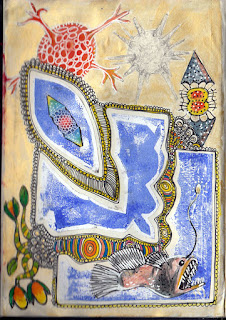 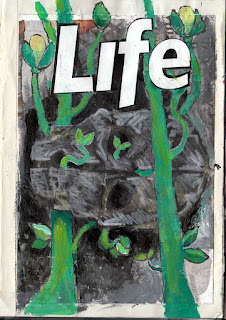 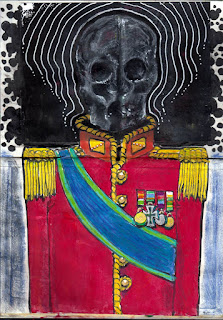 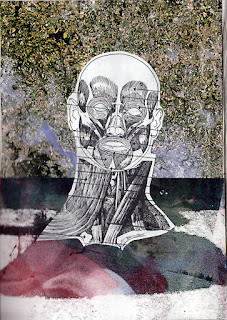 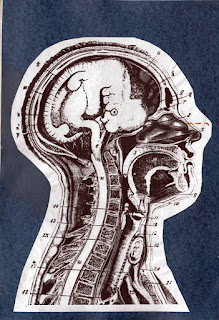 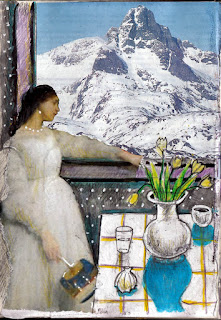 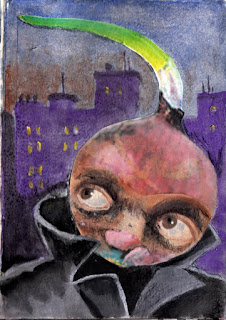 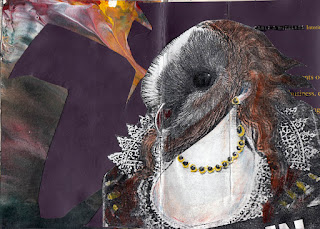 Now that Becca, my second Partner in the Sketchbook Circle, has received her sketchbook back from me, I can show you the additions I made to her book.

The first four show Becca's original pages with my additions. On her introductory page she spoke of new beginnings but chose to include a number of skull drawings which we tend to associate with death. Working with those apparently opposing ideas, I started thinking about sprouting bulbs and new growth and went on from there in the first three. For the fourth, I had a blank page opposite a skull, so introduced the uniformed figure of "Major Death", complete with military medals.

For the five pages of my own I began by looking at scraps of collage material I had on and heads. Two anatomical diagrams of parts of the head, intended for students of life drawing, came together with a fragment of red stained etching paper on a background of  a map to give me "Skinned". More simply, I found an old photocopy of a cross-section of a head with what appears to be a foetus for a brain and laid it on another fragment of blue stained etching paper.

The girl from Whistler's Symphony in White, No. 2: The Little White Girl was a torn fragment Becca had left in the back of her book for future consideration. I used it with some other ideas of "white" and made a new image.

"Onion Head" happened by accident. While looking for images of sprouting bulbs to use with the skull drawings, I had printed off from the internet an image of a sprouting onion but found it was too big for the any of the skull pages. Laying it down on a blank page, I suddenly saw it as a head; with the addition of a pair of eyes from the front page of an Observer Colour Supplement and some gouache, the mysterious character came to life.

Finally, the "Owl Queen" is a fragment of a photocopied image I put together in my days of Mail Art exchanges. Coming together with another curiously shaped fragment of old cut up brochure and a bright flame-like piece of etching paper, I think I made something mysterious.

Now comes the exciting bit: what will Becca make of all of this? Will she add to my images? Will she find something in them to strike some sparks? Time will tell.

And what do you make of all of this? I'm always interested to hear from you.

Meanwhile, I'm waiting on tenterhooks for my original sketchbook to come back from Ang with her additions.
Posted by harry bell at 13:10 2 comments: