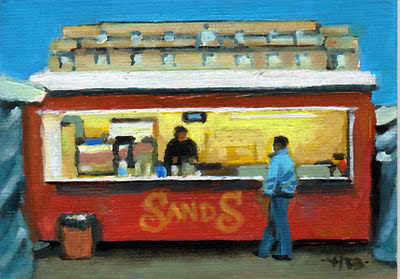 This year, as we did two years ago, Pat and I are spending Xmas with Pat's son Andy and his partner Helen in Cambridge. Last time I made a small Holy Island painting as a thank you Xmas present and I thought (without wishing to set a precedent!) that I might do the same this year. Looking through some photographs I'd taken in the Xmas market in Cambridge, I picked out this refreshments van as something I thought would make a nice little painting.

I've had to keep it quiet, of course, but it's Boxing Day now and Andy and Helen should have seen it, so I can safely post it here.
Posted by harry bell at 10:44 2 comments: 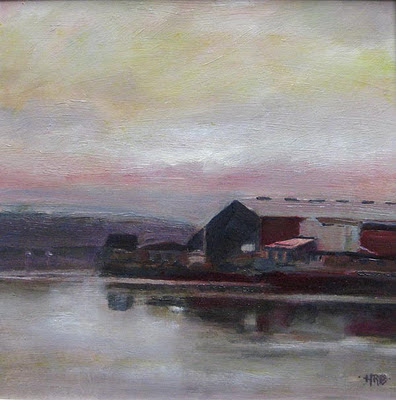 The show at Whitley Bay ended on Sunday and I went to collect my pictures today. And there were only three to bring away! This one, River Factory, was sold on Saturday, possibly to an old friend of mine whom I haven't seen for twenty years or more. It shows a factory on one of the bends in the River Tyne, now quite possibly demolished.

Although the show seemed to be doing less well than the similarly situated show in July, by the end it had done about the same level of business. People may have been hesitant about spending in the current climate, but it's clear they recognised a good buy when it came down to it. I think we might try the same format next year if the shop space is still available (and who would expect a sudden demand for large shop spaces in the next 12 months?)
Posted by harry bell at 16:10 2 comments:

Xavier Pick is an artist whose work I really like. Here's a video of his preparatory work for a commissioned painting of London which I hope you find as interesting as I did.

Pick is a particularly good draughtsman who trained at the Royal College. Imagine how much better he'd have been, however, had the timelines shifted and he'd gone to the RA Schools where he could now benefit from instruction from the Grande Dame of English Art, Tracey Emin, who has now been appointed Professor of Drawing there. 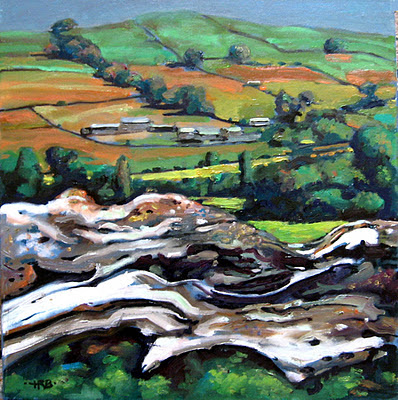 Have I mentioned the Painters' Group before? No, perhaps not. I began my painting studies in 1989 with the OCA and continued with them for quite a few years before taking a leap of faith and going to Newcastle University to study for a BA in Fine Art. In the last few years of being with the OCA, the tutor was William Varley. At the time Bill was also in charge of First Year Studies at the University and wrote exhibition reviews for national newspapers such as The Guardian and The New Statesman. He still writes some critical pieces, I see.

Anyway, Bill proved very influential in my development and, indeed, was instrumental in encouraging me to think it might actually be possible for me to undertake the degree course. Unfortunately, he retired from the University in 1998, a year after I started there, and frankly the quality and direction of the teaching moved away from what I had gone there to find.

Bill also gave up his role with the OCA but continued an informal critique session every month with former students. For some time it didn't seem to be something that would meet my needs, but recently one or two friends of mine, including Maureen Stephenson and Elizabeth Talbot, joined what had come to be called The Painters' Group. That made the difference for me and I joined Bill's group again in October (in time to be included in the XIV Show, in fact).

The most recent meeting was on Saturday and I made a special effort to get this Fallen Log painting completed on Friday night. Inevitably this posed problems in carrying the wet painting on the bus to the session, but it was worth it. It's always good to get other people's input and on this occasion not only Bill but some of the other painters had interesting comments and questions. The questions, I find, are particularly helpful because they make me think about the painting and articulate my thoughts more clearly than might otherwise be the case.

The painting was well received and as has been my experience of the group in the past, I came home wanting to get straight back in the studio.
Posted by harry bell at 13:55 2 comments:

"Art in the Park" 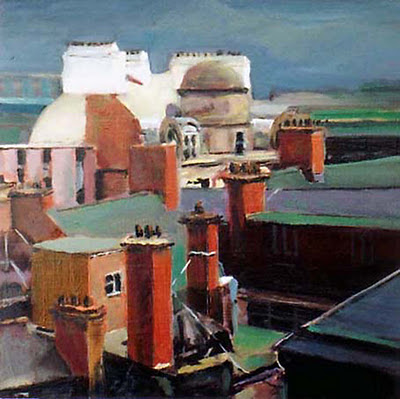 Earlier in the year - June, I think it was - the Art Club held a selling exhibition in an empty shop in the Park View Shopping Centre in Whitley Bay. For whatever reason, I took no part in it, but I understand it was popular with the public and sales were good.

Which is why I have four small paintings in the new show in the same premises, which opens tomorrow. I think the standard is pretty high, given that it's a club show and no judging was done on the entries. If you're in the area, why not drop in and take a look?

If you can't get there, or if you'd like a flavour of the show, try the slideshow on the Club's website. The pictures will be changed next week, I think, but for now it shows the painting above.
Posted by harry bell at 23:24 2 comments: