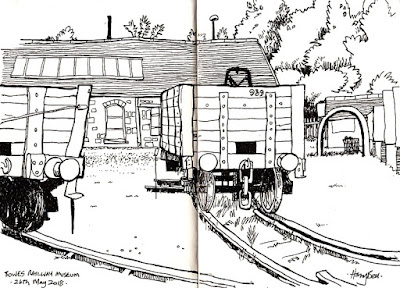 Bowes Railway Museum
(0.8 marker over two pages of A5 sketchbook)

Allan picked me up at 12.30 yesterday and we drove in unaccountable sunshine (can this be Summer at last?) to the car park of Bowes Railway Museum, just at the edge of Gateshead. I'd been wondering if we might be a small party of sketchers this time, as response from our regulars had been lukewarm or absent when the venue was proposed. ("Oh, railways!" said the ladies.) But my fears were groundless - in the end we numbered eleven, with many a new face.

Pessimism is always rewarded, of course, and we found that the Museum site closed an hour earlier than we'd thought and even worse, the cafe closed an hour sooner than that. Recognising that there'd be no time for a coffee break or a bit of the usual show & tell at the end, we decided to just get on with it, after an initial tour of the buildings.

Straight away I could see there was a huge amount of things to draw,  especially inside the workshops, so after a short walk I picked on the first view that caught my eye that also benefitted from being out of the light wind. I toyed with using my A4 sketchbook but decided that I'm really no longer comfortable with standing holding that size and weight for any considerable time, so took out the A5. And that proved to work well for me, especially utilising a two page spread to take in a couple of coal wagons and one of the long sheds. OK, the railway lines are wobbly, but that's an effect of standing holding the book and doesn't honestly bother me to any extent.

I realised there was only about an hour left of the session, so after checking out the inside of one of the sheds where Bob was drawing a forge of some sort, I decided to stay out in the sunshine and see if it was worth drawing wagon No.939 (see the drawing above) again, but from further inside the yard.

What clinched it for me was finding that Mark was now painting the same wagon and presented me with an opportunity to capture a relatively stationary figure. 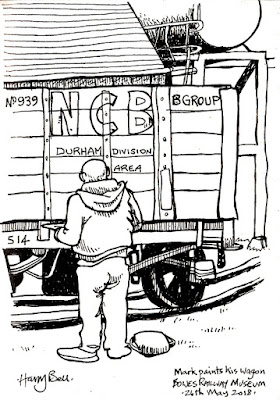 Mark deserves an apology for the sagginess of his arse and the shortness of his legs in this sketch, but as I say, we were running out of time. I'm happy to confirm that in fact he's a reasonably well-proportioned human being; corrections might have been made if only he hadn't finished his sketch and moved away.

With no time for a proper winding up of proceedings, we had a bit of a natter and Allan took this group photo. After that, well ... we dispersed. 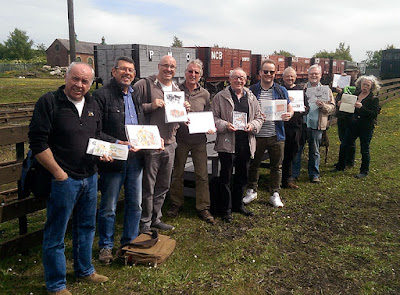 Next time: Provisional date 23rd June. Venue to be decided. 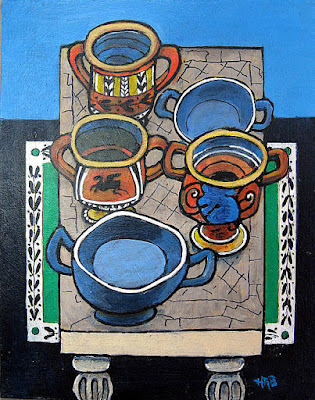 I'm still suffering something of a creative block: there are things I could paint but the motivation to do so isn't there. I know the advice is "When you can't paint, paint something else" but that's not helping, so the search for a subject with a raison d'être continues.

Though I'm mostly idle (if just thinking a lot counts as "idle"), I did spend a little time a few days ago making some corrections to this small painting so that it's now finished.

My Regular Reader may remember that the composition came about after I'd printed off a copy of another small painting, cut out the pots and rearranged them. This is the original: 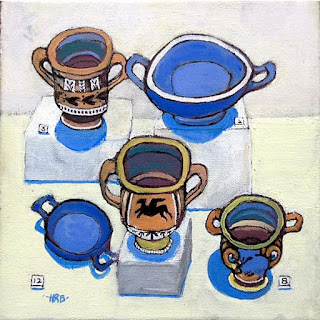 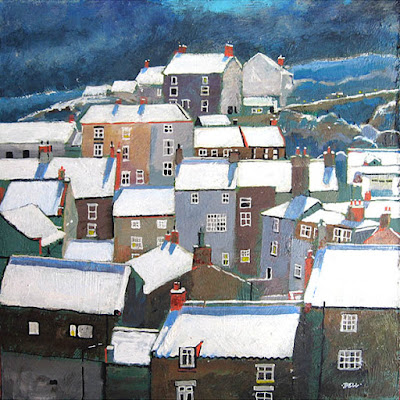 After the excitement of the workshop in York I found myself unsettled during the week, unable to really get into any work of consequence. Finally, at the Friday meeting of Gateshead Art Society (where the suggested theme was "Urban Painting"), I was able to finish this winter picture. Brrr.
Posted by harry bell at 13:21 No comments:

Karen Stamper and the Concertina Sketchbook

It takes a lot to get me out of bed, dressed and breakfasted and onto a train by 8.43 am these days, but that's what happened last Saturday. I was on my way to York with fellow Sketch Crawler Richard to take part in a workshop led by Karen Stamper.

I've been looking at Karen's work for quite a while and wondering how she achieved the effects in her concertina sketchbooks, so when the opportunity to find out came up, I jumped at the chance.

I ended up with six pages of an abstracted townscape full of references to Crete. One of the fascinations of the concertina sketchbook is that as it's folded, new compositions come into view. 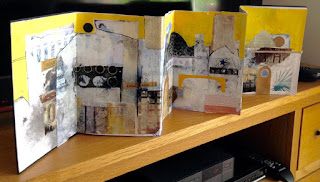 It was clear everyone enjoyed themselves and seeing the sketchbooks laid out together showed how individual the end results were.

Pat and I have a long holiday in Chania planned for later this year and I can certainly see me using some of these techniques while I'm there. And I'll be watching out for the chance to take another of Karen's workshops!