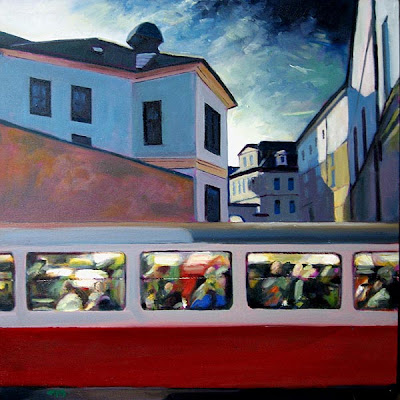 This has proven to be the most difficult in the series to complete, mainly, I think, because of the lighting conditions within the painting. At the time of day represented, colours lose much of their strength and I found this quite challenging to work through.

Nevertheless, I think it works well enough, and I'm particularly pleased with the way the windows give a suggestion of little abstract paintings in their own frames, running across the bottom half of the painting like the predella to an altarpiece.
Posted by harry bell at 15:35 10 comments:

First of all, a Happy St George's Day to Englishmen and women everywhere, whatever your colour or creed. This is your day, even if, like me, you're somewhere where the more exuberant display of celebration might not be diplomatic.

I did this drawing at the quarry on the way up to Craig Rossie, too. The more I stared at the rock face, the more evident it became that there was a triangular, or pyramidal shape in the fractured rock. So I drew it with the Pentel Brushpen, losing myself regularly in the splits and shadows until I'm sure this isn't in any way an accurate record of the rocks.

The watercolour wash was an afterthought, but one I'm pleased with.
Posted by harry bell at 19:45 6 comments:

Mainly a solitary day today, up in the quarry. Tony was discernible some way off, only by his silver-white hair showing above the heather as he sat and painted the view from the slopes of Craig Rossie.

I opted for these rocks at the mouth of the quarry. I was taken by the light glittering through the fresh leaves on the shrub growing out of the leaves, but I should have known that I'd not really be able to capture the effect with coloured Conte. Nevertheless, I'm not entirely displeased with it - there's a chunky feel to the rocks that appeals to me more than the shrub did. I should have replaced the shrub with one of the spindly trees that grew nearby.
Posted by harry bell at 19:00 No comments:

We split into the same two groups again today (something of an unwelcome practice, I think), and we three went into Auchterarder for groceries, then investigated two pubs in the area in the only sensible way - a pint in each.

Across from the Kirkstyle Inn (good pint of Thrappledouser) is St Serf's Church and a man there will come out of his little hut to tell you more than you thought you might possibly want to know about this lovely old building. He's a treasure, absolutely wasted there, but perhaps quite content.

Anyway, he encourages artists to paint and draw in and around the church, so we sat down in the churchyard, in the glorious sunshine, and I produced this small effort. I've said before, I'm no watercolourist, but it does come in handy for "colouring in".
Posted by harry bell at 18:59 2 comments:

I've been checking out the quarry but so far haven't found what I think I'm looking for. In particular, there's no special motif I'd like to spend some time exploring, although there are probably rock forms that might repay looking at again. Today, however, I drew these plant stalks in the garden.
Posted by harry bell at 18:50 No comments: 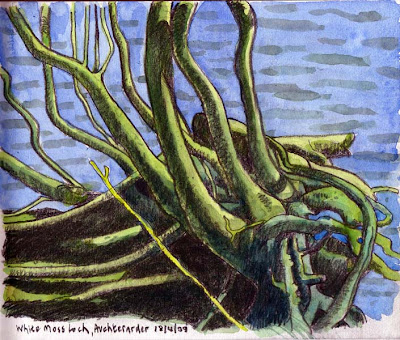 We arrived at Shinafoot Studios around 4.30 on Friday night and after settling in, went out again looking for a good restaurant. Unfortunately, Auchterarder is something of a restaurant desert. we settled on an allegedly Italian place whose menu included only pizza and two other Italian dishes. My spaghetti all marinara was really well cooked, but I had to wait an age to find that out and overall the restaurant was uninspiring.

We came home up the windswept main street and paused for a moment to watch the local kids playing Toss the Dustbin Across the Road.

Today we split into two groups, one to check out the bridge at Kinkell, the other to walk up into the hills and find the quarry at Craig Rossie. I decided to follow on a little later (I'm really not an early morning person), taking the quarry route, but somewhere I took a wrong turning. Ending up on a long boring rock-strewn track, winding through freshly tilled and thus empty fields I emerged at a farm where all the domestic and farming detritus in the whole of Scotland had come to rest.

Or so I thought, but later I found that the rest of the area was a fly-tipper's paradise. There was a golf course and there were colossal prosperous-looking farms, and there were also car parts, Coke bottles, mattresses, sheets of corrugated iron, tractor tyres, car tyres, plastic bags, garden chairs, dead Xmas trees, in every ditch and hedgerow. The good folks of Perthshire should be desperately ashamed of themselves.

I came to White Moss Loch which boasted many water birds, although I could see few of them from the track that skirted part of the lake, but allowed access only by climbing over a pile of plastic tubing (various sizes) and ended at a breeze-block and corrugated asbestos building which had been bulldozed then allowed to crumble into the landscape.

I did this drawing while randy mallards chased one another round the lake and a swan came by looking for sandwiches, but I had none for him.
Posted by harry bell at 18:15 2 comments: 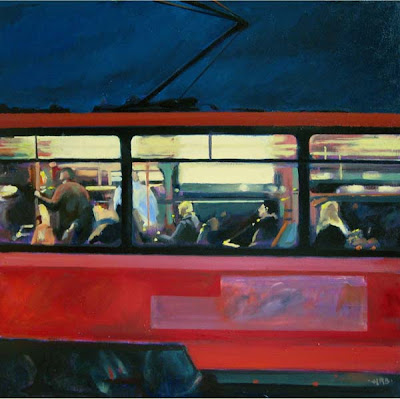 I'm in a mad whirl at the moment, trying to finish this Tram Series. Now No.1 is done, but tomorrow I'm off for my annual Compo & Clegg Painting Week. This time we're in Scotland, staying at Margaret Evans's Shinafoot Studios in Auchterarder. When I get back, I'll have only a few days to finish the other two Trams. 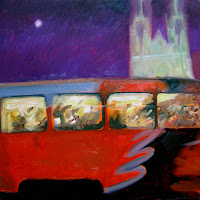 Tram No.2 (work in progress) 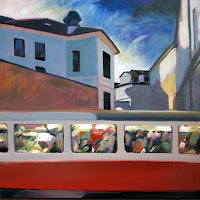 Tram No.3 (work in progress)

I may not have time to post again before I leave tomorrow, so be good while I'm gone.
Posted by harry bell at 13:49 6 comments:

Another Blogday Rolls Around

Yes, five years since I began this blog. And against all expectations, it shows no sign of going away. Happy me.
Posted by harry bell at 15:10 No comments:

To the Trams, via the Station 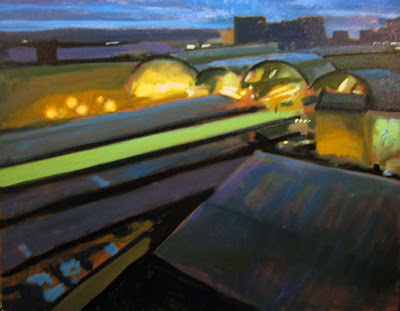 Although I went into the studio with every intention of working exclusively on the Tram Series, I discovered a desperate need to revisit the Night Station first. Of course, given my basic level of disorganisation, I couldn't lay my hands on the reference material for this picture, so I could only go this far with it today (I found the references later and am not prepared to embarrass myself by saying where). 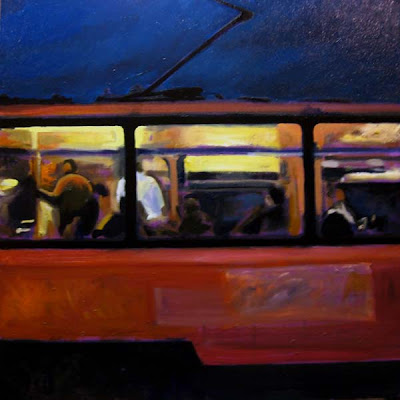 Prague Tram No.1 (work in progress) 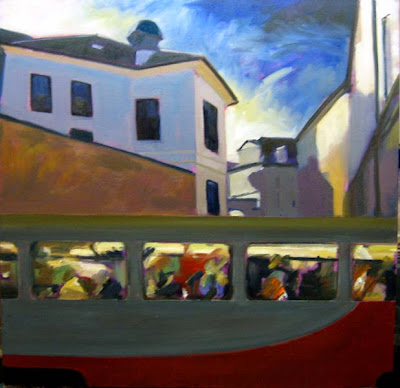 Prague Tram No.3 (work in progress)

I'm having reservations about No.3. I may rethink the livery.

Short Stay Among the Oaks 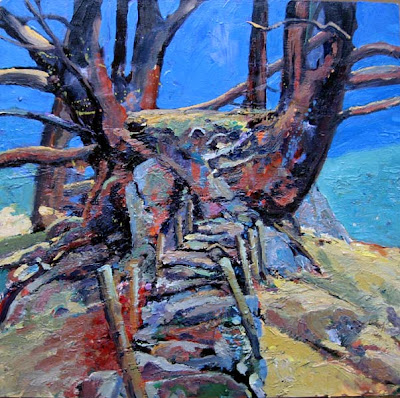 I was hoping to get a lot done in two days at the Club this week, but I wasn't counting on being asked for advice on a painting, nor on the building being closed tomorrow for Good Friday. I'm afraid I lose track of public holidays now that my life doesn't depend on being given time off by the Man.

And I must emphasise that I don't by any means resent being asked for advice. Thinking about other people's paintings can be really helpful in formulating your own ideas of what is right and what not so right, and putting them into words.

Still, it means I made slow progress on the Trees today. I've removed some of the surplus marks from the grassy planes, which I do think helps to keep the eye in the essential areas of wall, rocks and trees. I'll just have to wait until next week to do more.

Meanwhile, since I won't be at the Club tomorrow, it'll be back to the trams.
Posted by harry bell at 21:17 No comments: 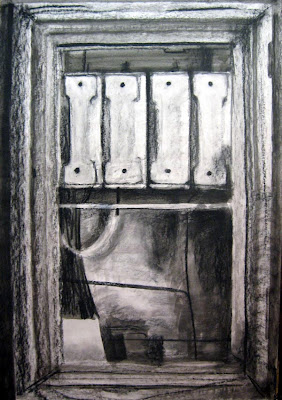 I think I've mentioned before that, every year, I used to spend a couple of drawing and painting weekends at Ford Castle in Northumberland. Most of the time the weather was good, but now and again the rain would set in and the best thing we could do then was work inside the castle. Rarely content with drawing things that everyone else found attractive (perverse, I think I was called more than once), I drew this fuse box on one such rainy day.

But on another, I was taken with this meeting going on in the Main Hall, so got out my sketchbook. 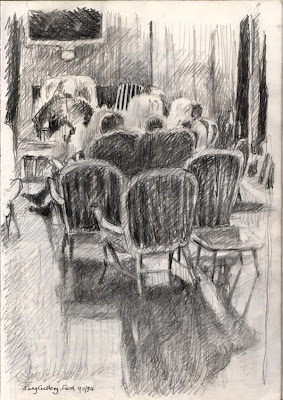 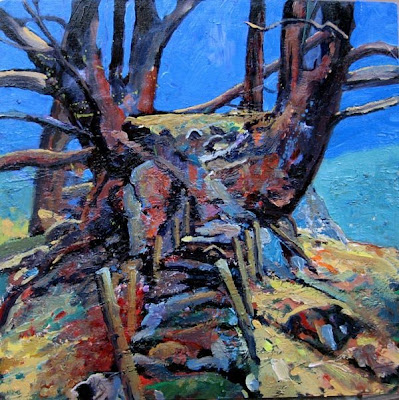 I wasn't sure that I'd be able to work over this much today, because the paint was wet, but I've found that using quite thick paint on the brush, mixed with a good bit of Liquin, allows me to slide the paint over the lower layers, without too much mixing of the layers.

The crimson passages were too insistent, I found, and most of them have been taken down with oranges and browns. One or two remain, mainly on the tree trunks, and I'll see what I want to do with them next week.

I hadn't decided yesterday whether I wanted to include the fence posts, but at the last minute I put them in today. I think it was the right decision - they help to lead into the picture and provide a counter-rhythm to the trees on the right.

This being a slight departure for me in terms of subject matter and treatment, I asked Pat what she thought when she called into the Club at the end of the day. She liked it from a distance, but thought it might be too busy close to. Maybe she's right; I'll have to think about it. I suppose I could reduce the number of facets and planes into greater flat areas of paint.

I know it's difficult for you to see it from a distance and close to, but what do you think?
Posted by harry bell at 21:14 8 comments:

Can't see the wood for the trees 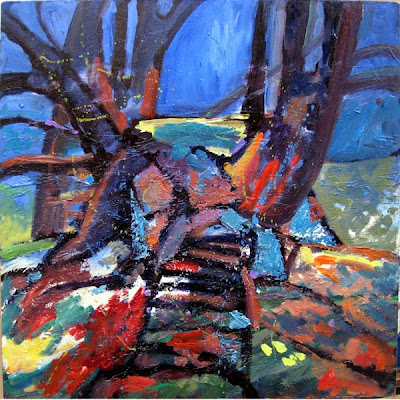 Part of my current malaise, I think, is due to a general dissatisfaction with what I'm doing. Or at least, a failure to perceive the direction it's actually going in. It's not so much that I don't like what I've been doing -- I do, and will be happy to show it anywhere -- but that I'm unsure what it is that I like about it and how I should build on that.

I decided to get myself to the Club today, but didn't feel like working on the two pictures I have there, so took along an old 24 inch canvas I knew was never going to amount to anything. Over the old painting I started this one of some trees I found at Sawrey last year. It was fun working over the very textured old paint layers, and I let myself go with a vermilion red as a substitute for the greens that should have been there. However, I think I'm going to have to tame the colours somewhat - I'm working out of my comfort zone here and will need to curb the exuberance before I'll be satisfied with it.
Posted by harry bell at 01:33 2 comments: