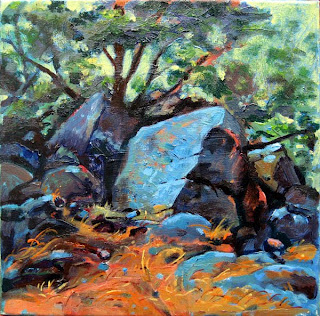 OK, OK, the post title doesn't indicate more brooding gloominess. It's just a wry nod to old movie titles, but also indicates something that went wrong with the painting today.

I was back at the Club for a Friday change of faces, not really expecting to finish this painting. Progress was good, however, and I like the way it's going. But I made the mistake of trying to change the colour of the sky from blue (too much with the rock also being blue) to a kind of yellow which would echo the orange in the foreground. Too late, I realised the yellow was picking up the greens in the trees and before long there was no yellow, just a yellow-green.

Not to worry. The new colour will make a useful base for more work next week, when I expect to easily finish the piece.
Posted by harry bell at 17:34 4 comments: 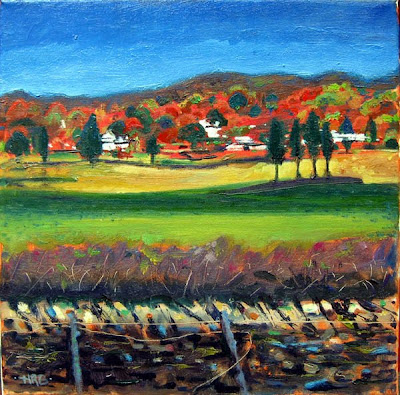 Friends tell me my posts have been sounding very gloomy and in retrospect, I guess they're right. I apologise, even though there are really quite good reasons for their being so. What will make them change without an effort of will on my part, will be an increase in sunshine and an acceleration in the rate of completed work.

Sunshine is outwith my control, of course, but the last couple of days have been quite mild and sunny, so there's hope there. But what I really can have some effect on is the work. Back at the Club, I pressed on with this landscape and finished it. I had some trouble with the forest in the background and opted for a slightly stylised approach which interests me as a possible future avenue of enquiry.
Posted by harry bell at 19:24 3 comments:

Creeping to a Conclusion 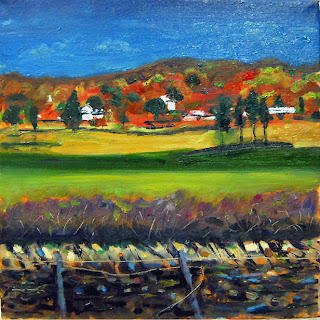 I made some progress today at the Club, but I'm undecided about it. Some of this I like, some I'm not sure about, but I think I can finish it next week, given that I'll have a week to mull it over.
Posted by harry bell at 21:37 No comments:

The Gloom Lifts a Little 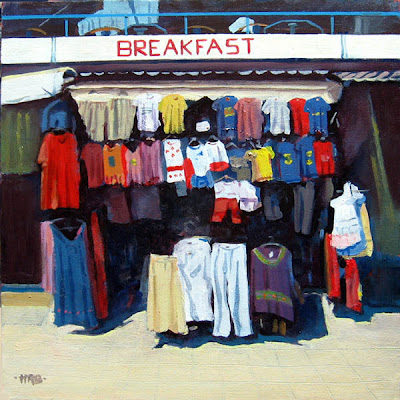 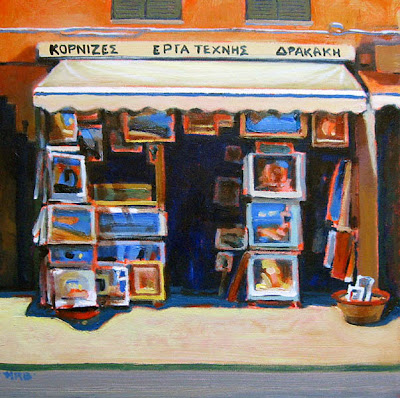 Helping to lift the gloom that settled following the evident loss of our show in June, came the news that these two pictures of shops in Crete have been accepted for showing in the County Durham Spring Open Art Exhibition. The show runs from 7th to 26th March in the Hutchinson Gallery, Bishop Auckland Town Hall.
Posted by harry bell at 12:35 6 comments:

Figure8, the group I've shown with since 2004, has been finding it more and more difficult to source suitable exhibition opportunities. Many of the galleries we've shown with have said they're happy to exhibit our work again, but not until at least 2012. Their policy of booking shows has moved inexorably forward so that they're now writing up their diaries three to four years ahead.

Which meant that we had nothing in our diary for 2011, except for one show provisionally arranged for June.

As seems quite common with galleries we heard nothing about the exact date, despite several emails and attempted phone calls. Until now. We were aware that the woman who agreed the exhibition for June, had left the gallery and passed on details to her replacement. We now find that he left shortly after joining and failed to pass on details of our show to his replacement. The new incumbent then gave our place in the diary to someone else, leaving us without a show. She then, in turn, left her employment.

The even newer holder of this obviously rewarding post is to discuss the problem with the management and invite us in for a meeting, so something may be salvaged from this mess, but I do begin to wonder how businesses survive in this way.
Posted by harry bell at 11:09 No comments: 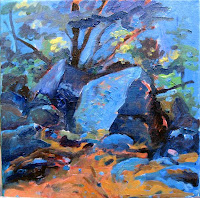 I realised I had no confidence in the painting I'd begun at the Club a while ago, so when I got back there today, I began to paint another new one over it. I think I'm going to be a lot happier with this and can make use of some of the orange of the previous painting. 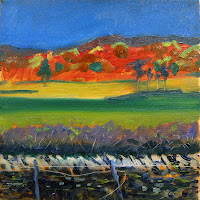 I also made a start on this new one. It's a continuation of the new series of landscape as strata that's begun to interest me. I'm not sure where I'm going with it and am tempted to describe it as an experiment. However, my old tutor, Bill V, used to say that a true experiment would require a control subject to be really valid, so instead, I'll call it what he thought such adventures should be called - flying by the seat of my pants.
Posted by harry bell at 19:43 2 comments: 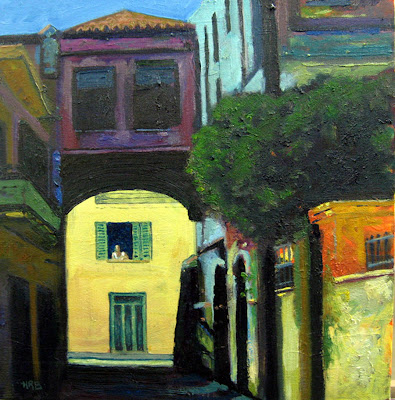 Back to the Club again, after a couple of weeks away and despite a bad weather forecast. Determined to finish this painting which has been hanging around for quite some time, I settled on a figure in a window as the focal point through the arch. It makes this something of a companion piece to The Orange House.

When I came out of the Club, the wind was rising to a gale and by the time I got home my trouser legs were soaked through. I don't like winter.
Posted by harry bell at 21:42 6 comments:

Painting of the Month 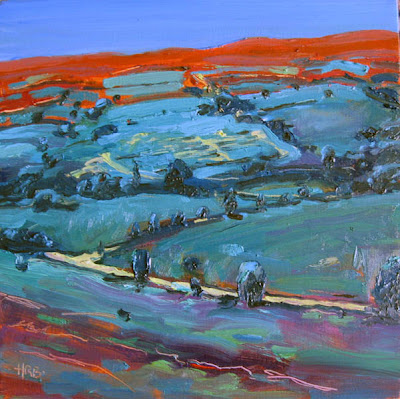 This painting has been chosen as a Painting of the Month on Painters-Online. There's no money involved and nothing to keep after February, but it's nice to get some kind of recognition now and again, isn't it? Makes me feel like I must actually be doing something right.
Posted by harry bell at 18:24 5 comments: