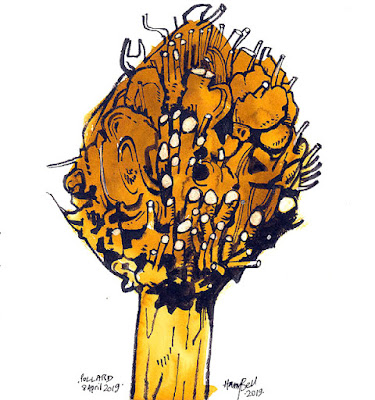 In March I spent six days in Belgium; first of all in Bruges, then in Leuven. They were both fascinating places to visit and I'd love to go there again. If only Brexit can be prevented from cutting us off completely from Europe. Or just prevented.

Being new to a place always makes it more likely that I'll spend the whole time there walking about, looking and photographing, rather than sketching. And so it was this time.

I'd love to go back, especially to Bruges, where I saw so much I'd want to draw. Oddly, rather than the buildings, the thing that stuck in my mind was the Flemish obsession with pollarding trees and I wish I'd taken more photographs of pollarding examples. I'd certainly make more of them were I able to do some drawing there.

Using one of only two photographs I took, I made this drawing today by quickly brushing in the shape with some ochre ink, then drawing over it with a Pentel Brush Pen. The cut ends of the branches were highlighted with a white Posca Pen.
Posted by harry bell at 19:11 No comments: