It may be architecturally unimpressive, but I'm delighted with my new porch.

When the winds blew in across the Valley from the north, it terrified me to go outside and down the stairs to my studio, all the time listening to the glass in the porch windows shake and rattle. I was convinced that one day the glass would shatter and take off my head. OK, I admit I watch too many slasher horror movies, but the thought persisted.

So it was a great relief to have Alan the Joiner come along, take out the old frames and insert some sturdy new ones. Not actually an easy task single-handed, given that above the wooden frames are three courses of brick and a flat roof, but he solved the problem by holding up the bricks and roof with some Acro Props.

All of which is by way of explaining why, yet again, I've managed to get no work done. As Alan was working on the porch, I couldn't get out to the stairs to the studio.
Posted by harry bell at 16:49 6 comments: 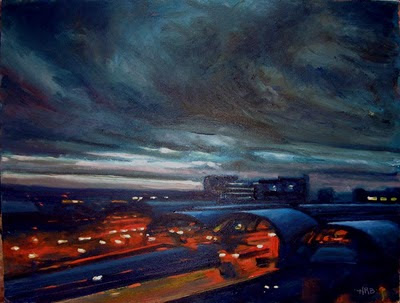 One done, one still under construction: 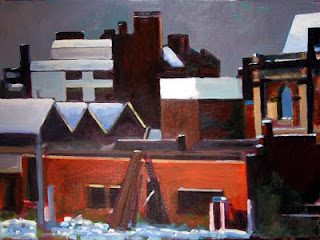 By the Tracks (work in progress)
Posted by harry bell at 22:04 8 comments:

Back to a Winter Frame of Mind 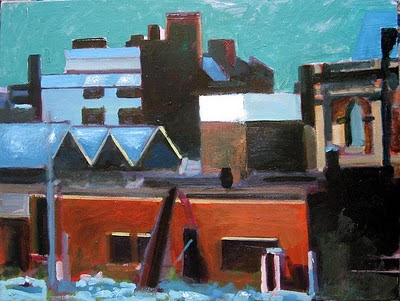 By the Tracks (work in progress)

Agonising over what to do for the upcoming Xmas show has held me up considerably in the last few weeks. Yesterday I decided to spend some time stacking paintings that have accumulated round the studio, but as I did so, I came across a painting I started for the show at Red Box last year. I ran out of time to finish it for that exhibition and was eventually unsure whether or not to abandon it altogether and paint over it.

I suddenly realised that, by taking a different approach to it, I might turn it into a valid Winter painting. A couple of hours later I felt that my optimism for the painting (and by association for the Xmas show) had returned.
Posted by harry bell at 12:48 No comments: 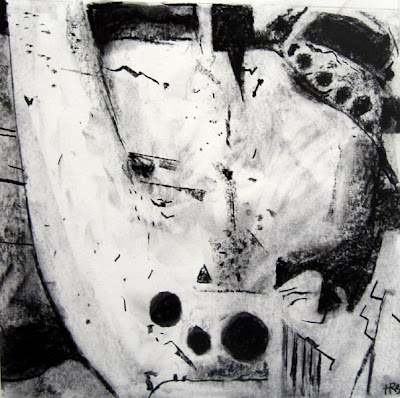 Despite my reservations about the first trip to Cyprus, I returned to Paphos in 2000. I still didn't like it much, but a visit to the Cyprus College of Art at Lemba did pique my interest.

For some years the students at the College had been building and adding to a strange wall round the edge of the yard. Made of concrete, wire, bottles and general junk, it was a fascinating structure and it led me to produce some drawings. This was the first.

My interest was such that I immediately made this painting from the drawing. As was always the case at Uni, no one expressed any interest in either the painting or the drawing and I came to believe that it was in some way wrong.

Looking at it now, I realise that it was, as I secretly suspected then, an interesting direction I could have taken. Another nail in the coffin of my University course. 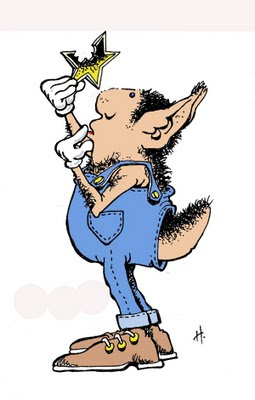 A rare return to a cartoon for Ilustration Friday. It was drawn with a fine point marker and coloured in Photoshop, for the set theme, Star Gazing.

It comes at a time when the Perseid meteor showers have been shooting through the earth's atmosphere. As usual, the clouds moved in after sunset in the north east to ensure the display was hidden. Perhaps they're only available on pay-per-view.
Posted by harry bell at 13:10 No comments: 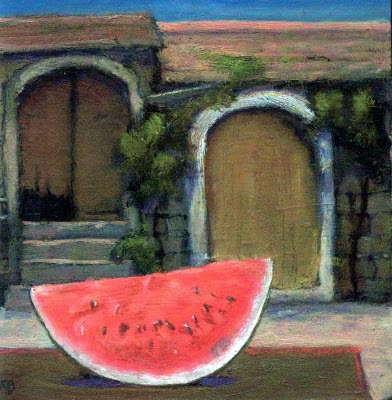 Courtyard with Watermelon
(Oil on board, dimensions unknown) Private Collection

In this time of painterly inactivity, I've been doing useful things, like sorting through photographs and ephemera. As a result, I've begun to find images of paintings I sold before I could photograph them. It's quite a pleasant surprise to be reminded of long-lost "masterpieces."

I recovered this image from a poster for my solo exhibition, Aphrodite's Island (Gallagher & Turner Gallery, Newcastle upon Tyne, 2000). Before I went to Cyprus for the first time, I'd promised to put on a show of paintings based on that trip, but the making of suitable pictures proved a nightmare. I didn't much care for the part of Cyprus I was in (we were staying just outside Paphos): it was dry and dusty, and given over to not very inspiring agriculture, so my source of imagery was very limited.

This picture ran aground when I found I had a painting of two doors in a not-very-interesting empty courtyard and not much else. For a while it sat in a corner of the studio and glared until something suggested itself to me. I had a small drawing (now lost) of a slice of watermelon which I realised made an inverted echo of the rounded arches of the doorways.

When I'd added the watermelon to the painting, it became one of my favourites in the show; it went onto the poster and sold at the preview.
Posted by harry bell at 17:00 No comments: 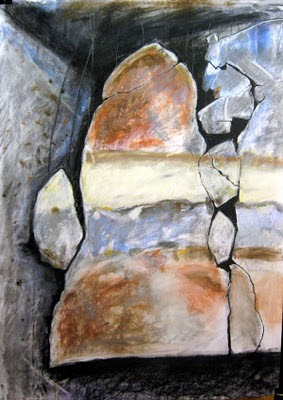 This drawing is so like the previous one that it seems daft to wait a while before posting it. Even now I'm surprised by how similar the two are.

I don't often follow up a charcoal drawing with one in pastel of the same subject, but this time I was trying to work out whether I wanted to make painting of it. I never did make up my mind and the painting didn't get made.
Posted by harry bell at 00:46 No comments: 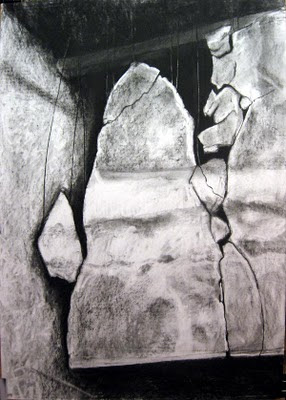 Coincidentally, in that post I mentioned that I was having problems with my left eye. It's turned out that I have ocular hypertension in that eye. Luckily, there's been no damage done so far and I'm now on a course of drops whose potential side effects are too horrible to mention.

This may account for my less than full time attention to painting at the moment.
Posted by harry bell at 16:10 3 comments: 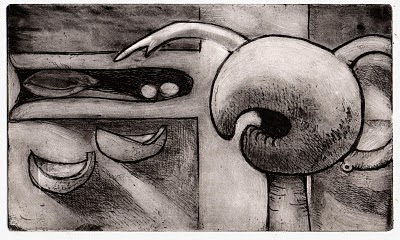 Another week without painting. In a spirit of a glass half full, let's call it a period of retrenchment and reconsideration, rather than a block.

Some time ago I made myself a promise to have framed a small collection of prints I made at University. The actual framing has taken much longer than anticipated, but yesterday I collected them from Gallagher & Turner, the framers who've framed almost all of my work since I began to get serious about it.

This etching has always been a favourite of mine. It shows the influence of Graham Sutherland, I think, which is unsurprising given that I was about to write my dissertation on his Pembrokeshire landscapes. It was based on some drawings I did in what was then the Hancock Museum but which has now become part of the Great North Museum:.

Here's a relevant page from my sketchbook; 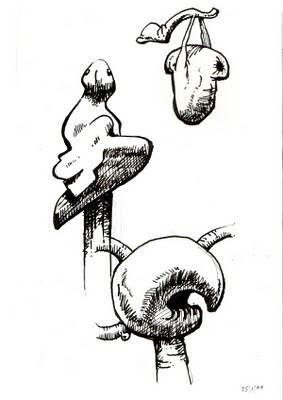