"... should never see things half done."

Or so my Gran always used to tell me. Which is not to imply that any of my faithful and appreciative readers are in any way fools or bairns. (Well, some of you might be bairns, and that in and of itself is not something to be ashamed of, we all gotta go through it.) But it's by way of getting to the fact that I worry sometimes about posting work in an unfinished state. It sometimes leads to kindly readers telling me how much they like the picture as it is.

If I say the sky is full of mud, it's because it's full of mud (although I admit photography may enhance the quality of the mud) and I intend to alter it. If I give a picture a title which includes words like "(1st pass)" or "(second day)" it's because I fully intend to work on it again and in all probability it will look quite a bit different. It would be as well to take this into consideration when handing out the bouquets.

Oh dear. Sorry to grump. Just ignore me. Continue to make appreciative noises all you want.

I guess I'm suffering from today's recognition that my high-minded determination to get rid of all the second-rate pictures in the studio has foundered so soon. I find myself with a charity auction, a Friends Xmas show and an ad hoc Figure 8 show making demands on me all at once. And I can't put work in those that might be wanted for the more important shows lined up for next year.

Which is why I've spent an hour or two today looking at old pictures, wondering whether they might pass muster if I maybe cut off six inches here or make a minor alteration there ...

Dammit, I'm just going to have to up my output.

Oh, and by the way, I reworked the sky of mud yesterday and will post the result here as soon as I can.
Posted by harry bell at 16:37 6 comments:

Most of the good artists I know review their work in their studios at least once a year, to assess the direction of their work and, more important, to find out something about themselves. In my own case, because I tend to be a bit hard on myself, I call this "reviewing the failures." It's at this time that I decide which paintings will go to the dump, which will stay with me for further work, and which will go to the gallery.

With the work strung out along the walls of my studio, I ask myself some tough questions: Is there a thread running through the work that suggests a new or different direction? What seem to be my strengths and weaknesses? Am I relying too much on one set of color possibilities? How could I stretch the color further? Have just about run out of steam on one particular subject? Or could I find something new and challenging by approaching it from another point of view Are there any really blatant influences that have crept into the work without my acknowledging it? These are some of the questions you, too, should start asking yourself to develop your own critical eye.

Most of the painters I know collect "How to" books, despite their almost certain expectation that the one thing the books will not tell them is "How to." I have a good collection of them, and they stay on the shelves, not because their advice is much use, but because I Like Looking at the Pictures, and sometimes the choice of palette is interesting or maybe there's a bon mot or two.
Despite this cynical view of instructional books, a select few remain as longtime favourites. And one especially has been such a favourite that when I came across another very cheap remaindered copy, I bought it to keep in the studio while I was at University.
The book is "Painting With a Fresh Eye" by Alfred "Chip" Chadbourn (Watson-Guptill, 1987). Sadly, I see it's now out of print and a bit of Googling shows that Chadbourn himself died in 1998. Pity, I think I'd like to have met him.
He seems to have been an interesting character. Born in Izmir in Turkey in 1921, he went to art school in Southern California, where he found the local art collections parochial and dull. Taking a freighter to Europe in 1947, he settled in Paris and opened himself up to the lessons of painters like Braque, Picasso, Matisse and particularly Bonnard, who had died that year.
When he returned to live in New York in 1952, he found that his new way of painting suddenly seemed stale because the Abstract Expressionists were in the ascendancy. He hung out with some of them and began to paint in a similar manner. After a year, he threw most of it away and realised the importance of being true to oneself.
I don't think Chadbourn was a great painter, but his work is fresh and direct, with an exciting use of colour and I certainly wouldn't turn my nose up at hanging one of his pictures on my wall.
Most of all, though, he seems to have been a remarkably adept tutor, judging by his books (there's one other - A Direct Approach to Painting, North Light 1980). His advice is sensible, straightforward and mercifully free from waffle. He's not averse to dropping the occasional name, but when they're of the calibre of Braque, Matisse, Hopper, Diebenkorn and Thiebaud, who's going to mind?
All of which is by way of getting to the quote at the beginning of this post. Although I've often decided that a painting simply wasn't going to work and have painted something new on top of it, I've never thought of taking stock the way Chadbourn proposes. After almost 20 years of painting, I'm beginning to accumulate an awful lot of pictures. And these take up a lot of room. It comes hard to say, "This painting is well painted, but it's simply not good enough to hang with some of the others." There's always the feeling that someone with blunted sensibilities will come along and like it more than they really should. But if I don't think it's good enough, it's not very moral of me to sell it to them, is it?
Very soon now, I'm going to take some time out to sift through my back catalogue and either destroy the poor ones or, at least, set them aside to be painted over. And I imagine I'm going to find that quite a cathartic experience.
Posted by harry bell at 14:27 8 comments:

Mud in the Sky 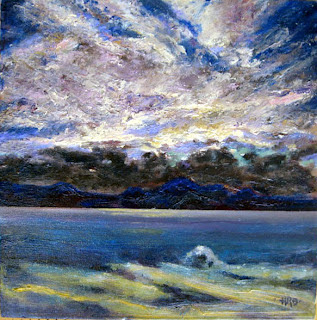 Brought on by collecting my prize for last month's painting competition at the Art Club, a mood of optimism (or was it greed?) made me pull out and start again a sky painting.

Unfortunately, The Grumbler was in garrulous mood and I found I was painting with only half my mind. The other was on the grumbles and thinking of retorts. As a consequence, I'm afraid I've overworked the paint, particularly at the left. Some of the colours have definitely become muddy, although here are quite pleasing specks of colour peeking through elsewhere in the composition.

It's by no means a lost cause, so I've put it on the drying rack and will return to it next week. 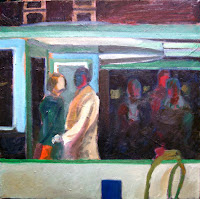 Spotlight (1st pass)
I was looking for something new to start painting at the Art Club today, so I began to draw this subject out on an old canvas at home. ( This is the third picture I've begun on this canvas and it's developing a nice texture.)
"It would be nice to just get some paint on to obscure some of the more intrusive elements of the previous picture, " I thought to myself. And before I knew it, I was fully into it and the Club was out of the question. Sometimes you have to just go with the flow.
This handsome couple were caught in the spotlight of a vaporetto station as their own vaporetto sailed by. I wasn't sure I could make this one work, so it's not very big (20 x 20 ins), but things seem to be working out. There were several other people on the deck to the right of the couple, but I'm playing them down considerably, leaving them out of the spotlight.
I'm particularly happy that I'm having to think less about the colours I'm using - they're becoming much more intuitive and as a consequence, a lot freer, I think.
I'm more excited about this series than anything else I've done for quite some time.
Posted by harry bell at 17:09 7 comments: 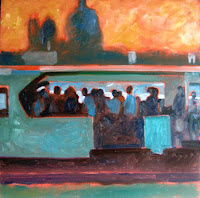 Vaporetto (1st pass)
Although I have a number of pictures in need of resolving and finishing, I realised recently that there's a big Figure 8 exhibition next year for which no work has been started.
What I'm hoping to do is make a series about Venice's fabulous water buses, the vaporetti. I've yet to capitalise on the hundreds of photographs I took there last year and this was one of the subjects I was particularly keen on developing.
It's something of a departure for me, in that it places figures squarely in the picture as the most important element. Even if bits of architecture put in an appearance, the figures are what it's about. This being largely untried territory, therefore, it's important that I make a start.
With that in mind, I began this new canvas yesterday. In a further departure from my usual practice, instead of a coloured acrylic ground, I laid down an imprimatura of terra rosa oil paint and before it was entirely dry, began to paint into it. This has produced some nice brushy paintwork which I'd like to retain as the picture develops.
Posted by harry bell at 12:10 6 comments: