Joe Leddy, Bill and myself out at night." 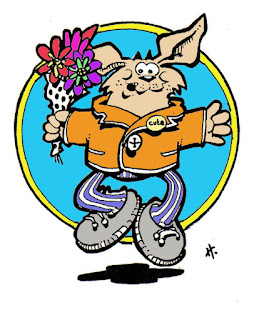 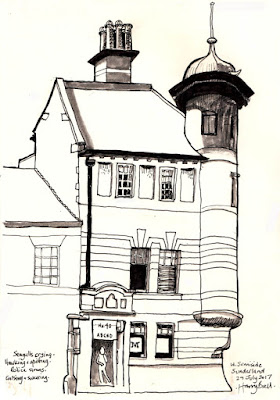 This was the first outing for the newly renamed Urban Sketchers Tyne & Wear (Sketch Crawl North East, as was).

Drawing in Sunderland when there's a scheduled football match between Glasgow Celtic and the Black Cats makes for an interesting experience. Coming into Sunderland on the Metro from Gateshead, Richard, Pat and I watched as helpful fans and Metro personnel scooped up a legless Celtic supporter from the platform at the Stadium of Light. Getting drunk that early would certainly mean he'd miss the game altogether, but maybe he didn't have a ticket for the ground. Football is a mysterious game.

Mike led us from Sunderland Metro Station to the Sunniside area, where a bit of regeneration seems to be going on. There's a landscaped sitting area and a bit of public sculpture which didn't immediately attract me, so I started to explore the streets beyond. Straight away I ran into hordes of shambling Celtic fans, bottles and cans in their hands and incomprehensible chants on their lips. I felt a little as if I'd fallen into The Walking Dead tv series and there were bands of Walkers everywhere.

Retreating back to the Sunniside area, I eventually settled down on a wall and drew the first sketch, an interestingly elaborate building with a side turret. It turned out later that just about everyone else had drawn it too, but I couldn't see them beyond the bushes I was sitting next to.

You might notice the written sound effects I recorded on the drawing - seagulls calling, police sirens wailing not very far away and some women in a nearby building cursing, swearing and clashing pots and pans about. The sounds of the city!

I'm not too pleased with this drawing. I started to indicate the shadow on the top of the turret before realising that the same shadow extended down the whole face of the building, so I was just as happy to stop when the others decided to move on. 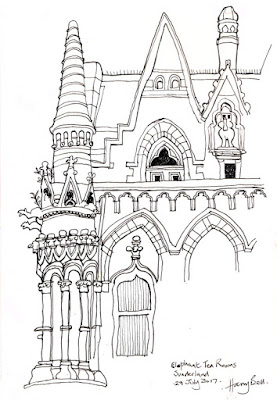 On the corner of Fawcett St and High St West is a fantastical building showing "a blend of high Victorian Hindu Gothic and Venetian Gothic styles." We all agreed it was an impossible draw, then settled down in the pavement cafe opposite and began to draw it. It soon becomes obvious, when drawing a building like this, that it's a matter of finding the patterns, then repeating them without worrying about there being the right number of elements. I was quite surprised at how much I was able to get done that way.

Went up to Exhibition Park with Bill."

The Exhibition Park is in the north of Newcastle.

Had few drinks at night."
Posted by harry bell at 08:00 No comments:

Garden at night."
Posted by harry bell at 08:00 No comments:

Out at night with Ronnie."
Posted by harry bell at 08:00 No comments:

Got taxi from Central."
Posted by harry bell at 08:00 No comments:

Sunny day. Lazed about."
Posted by harry bell at 08:00 No comments:

Went walk round by Cresswell in afternoon."
Posted by harry bell at 08:00 No comments:

The others left at 11.30. I stayed behind to clear up and look after Harry.

Fine afternoon."
Posted by harry bell at 08:00 No comments:

Went down to Cresswell, then to Plough with Ken."

I think this is The Plough: 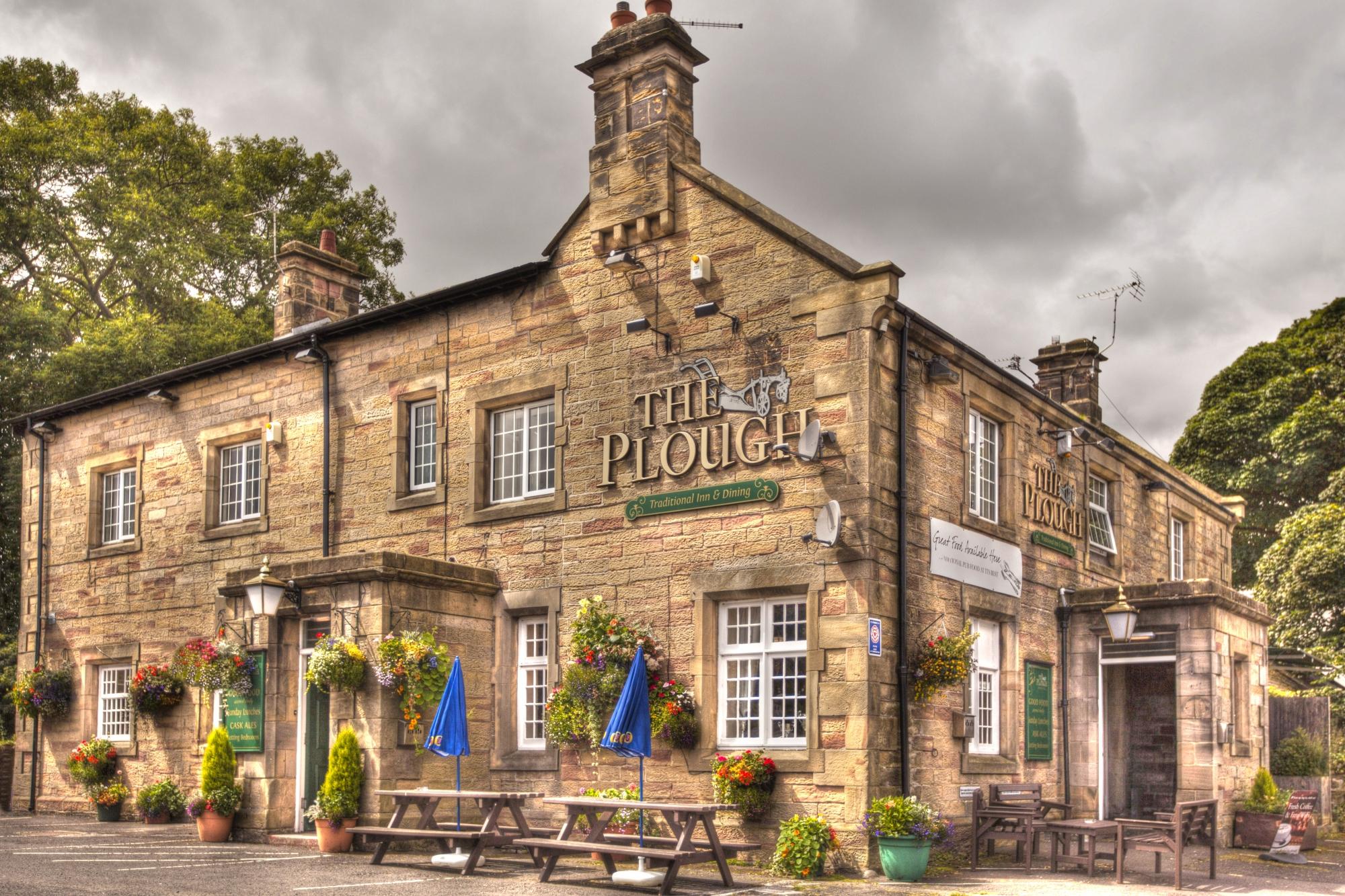 That's Aunty Lily, Uncle Ken and Little Ken. Names in the family could be confusing, so we used to refer to Big Ken (Mam's brother-in-law), Young Ken (Mam's younger brother) and Little Ken (my cousin).
Posted by harry bell at 08:00 No comments:

Lay about all afternoon.

Bill's people came at night."
Posted by harry bell at 08:00 No comments:

"Bill" was Bill Prior, an old family friend who, I think, had by this time moved to New Zealand.

Until I was at least 50, I was able to say that I'd had a holiday every year of my life, and this was the first. Cresswell is a little seaside village in Northumberland with a lovely beach|: 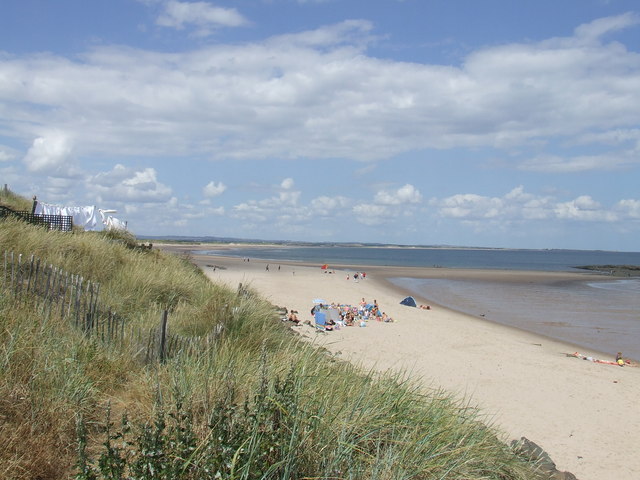 © Richard Dawson and licensed for reuse under this Creative Commons Licence
Posted by harry bell at 08:00 No comments: 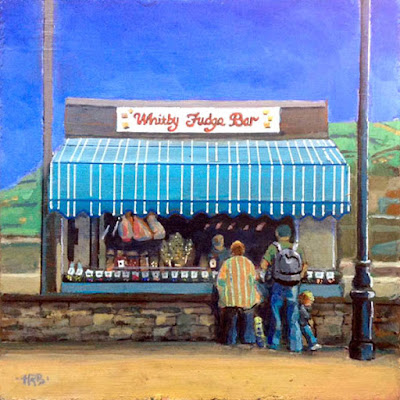 This the second of the two small paintings finished today and to be sent to the Bondgate Gallery show. Like the previous one, it offered a lot of fiddly detail and took several attempts to get a sky colour that I liked. As the awning is a cold blue (and yes, it had to be blue - no other colour would do), I needed to get a warm sky behind to make the picture work. For a while I wrestled with a pale purple but gave up on it as being too difficult to get the tone right without being very chalky - a problem with acrylics, I think.  In the end I opted for what you see - cobalt blue.
Posted by harry bell at 17:18 No comments: 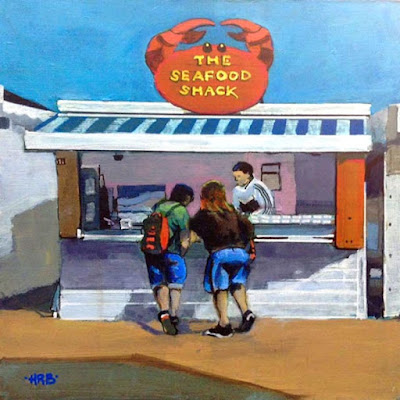 The North of England Art Club has announced another of their exhibitions of 20 x 20 cm paintings at the Bondgate Gallery in Alnwick. The theme is "People, Figures and Faces", the paintings must all be 20 x 20 cm and offered for sale at a fixed price of £50 I showed two pictures last year and sold one of them, so I've decided to submit two more this year (although there's no limit on the number I could enter).

This is the first. I found working in acrylic on board a little different to working on canvas and the size made the detailed subject a bit tricky, but overall it's worked out OK, I think.
Posted by harry bell at 17:09 No comments:

Solo bike, I assume, rather than the tandem.
Posted by harry bell at 08:00 No comments:

Looked after Lily's baby."
Posted by harry bell at 08:00 No comments:

"Went to Mother's at night. Too hot to do much.

Went out with Ronnie at night."
Posted by harry bell at 08:00 No comments:

I know my Dad grew up in Deckham Terrace, but whether my Gran was still living there up to this point, I don't know. This move will have been to her house in Alston Street. Here's a photo of me and Grandma, outside that house three years later. 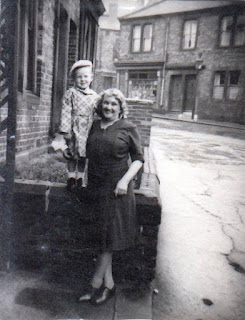 The Ritz Cinema was closed on 18th May 1968 with Dennis Waterman in “Up the Junction”. It had been purchased in a compulsory purchase order to build the A1 road viaduct, a scheme which also destroyed the nearby Essoldo Theatre. There are now plans to demolish the road viaduct, when money allows. 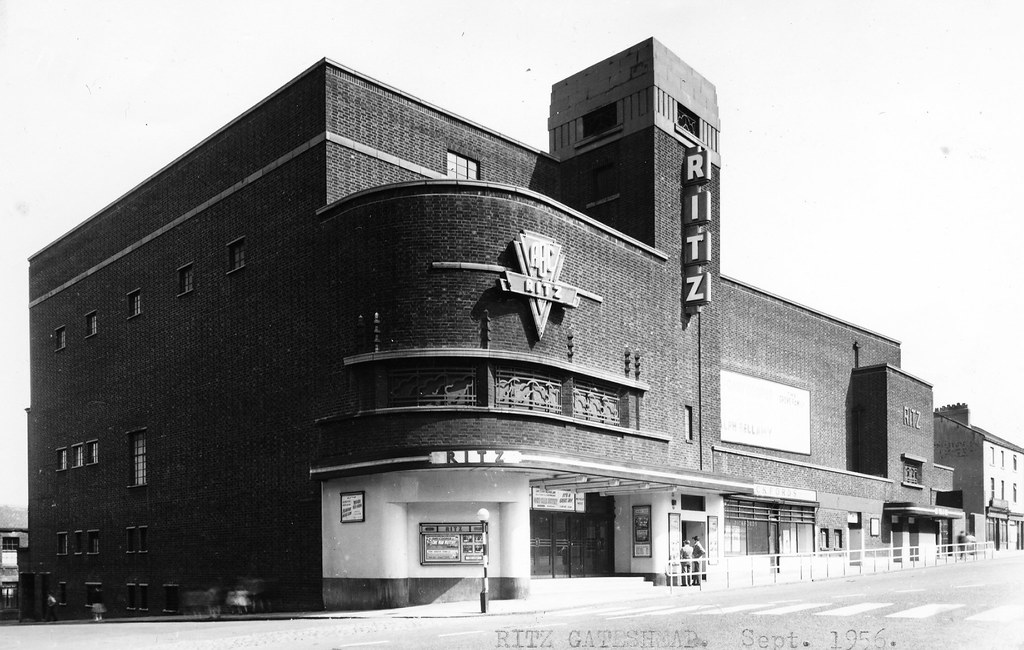 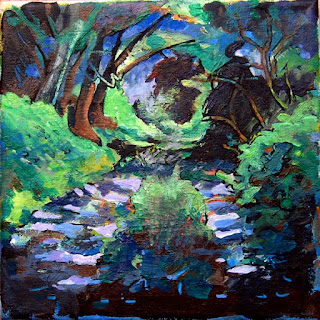 The title of this post probably derives from the fact that I can't for the life of me remember where I took the photograph on which this new painting is based.

I know I took it quite recently and even printed off a version before going on holiday to Croatia, and I know it was inspired by the two recent Rakes Lane paintings, as well as recognising the theme of "Entrance to a Lane" as one favoured by the Neo-Romantics.

But where this lane was escapes me for the moment. Perhaps it'll be revealed to me as the painting progresses.
Posted by harry bell at 12:58 No comments:

Helped Mother to clear up."
Posted by harry bell at 08:00 No comments:

Usual sort of Sunday."
Posted by harry bell at 08:00 No comments: 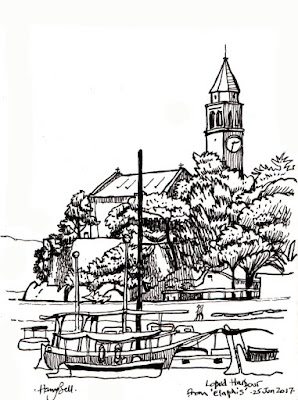 Lopud Harbour
(0.8 marker in A5 sketchbook)

Pat and I spent a lovely relaxing week on Lopud in Croatia last month. The island is part of the group of Elaphiti Islands, just off the coast of Dubrovnik and has no cars on it. If you don't feel like walking, there are golf buggies to get you around.

Before I went I had my usual fantasies of coming home with umpteen drawings, but the practicalities of doing so were soon evident. The town of Lopud lies in a long strip on the coast and the land rises steeply behind; a dip in the hills allows a road to a decent sized beach on the opposite side of the island. Apart from that, it's a matter of walking tracks, many of which we found quite demanding.

As a result, it's difficult to get far enough away from the buildings of the town to get a good view of them. And to draw anything other than buildings would mean standing in the middle of the street in what was a baking hot sun. This drawing was done from the shelter of the Elaphis Bar and Pizzeria while taking time over a 500 ml glass of draught lager. The only real problem I found with it was that boats had an annoying habit of sailing into harbour and then sail away again after I'd accepted that I'd have to include them in the drawing!

I generally set myself the task of coming home with at least one drawing from any holiday so given that we also had a thoroughly enjoyable time on the island, I'm not in the least disappointed.
Posted by harry bell at 18:35 No comments:

Went to garden for veg at night."
Posted by harry bell at 08:00 No comments: 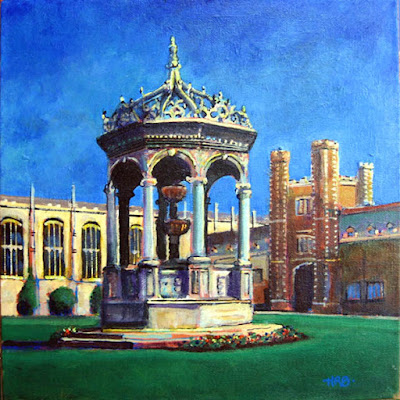 I finished this painting just before going on holiday almost two weeks ago and posted it off to the person who commissioned it. Through the magic of the Interweb, I was then able to learn that it didn't arrive when it should but was unable to do anything about it because I'd left the Post Office receipt at home.

So I was delighted to learn that it finally got to its destination today.

An interesting project, given that I've never actually seen the subject and had to work from photographs provided by the client and from online sources. The only other time I've done this was six years ago and that wasn't without its problems too.
Posted by harry bell at 14:53 No comments:

Had bad puncture on tandem."
Posted by harry bell at 08:00 No comments:

Latest from the Circle

These are the latest pages I added to the A5 sketchbook of my Sketchbook Circle partner Norma. 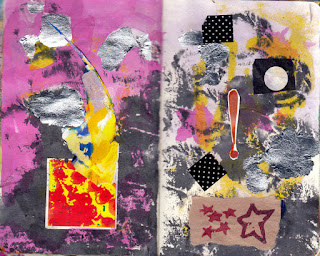 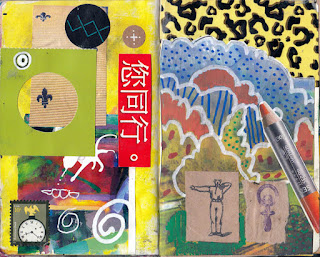 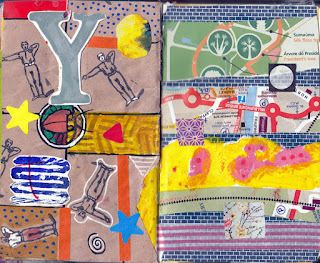 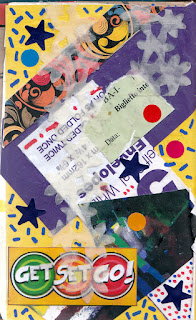 Took Doris to pictures."
Posted by harry bell at 08:00 No comments:

Took Lennie back to Town on Tandem.

Took Ken to garden at night.

Mother had arm attended to."

Two mysteries: I don't know who Lennie was, nor what had happened to Gran's arm.
Posted by harry bell at 08:00 No comments:

Took young Ken out on tandem.