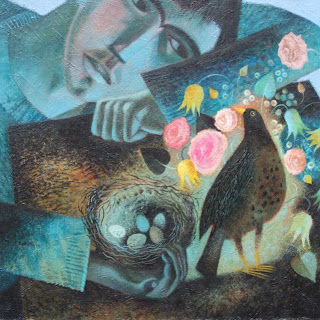 Nothing has to be a particular colour any more than it has to observe external laws of perspective. Rather, a painting is a world apart with an internal logic created by the painter. It is one thing to know this, and to accept it in the work of earlier artists, but quite another to do it yourself. Such is the nature of education now that children routinely copy pictures by Van Gogh or Picasso, often painting a bit each then putting the pieces together in a wall-sized collage. The belief seems to be that they will thus acquire a shortcut to the methods and insights of those ground-breaking artists. On the contrary it's like putting down the answer to a mathematical problem with no idea why, except that someone more mathematical than you has told you the answer. Until you understand through repeated practice and experimentation how and why to break rules, even the unwritten ones, all you will be as an artist is a facile imitator.

Clive Hicks-Jenkins is one of my recent discoveries. I first came across his very interesting blog, then followed on to his website and finally bought the book about his life and work. The book contains 11 essays about various aspects of his work, including paintings, drawings, and book illustrations and is well worth reading.

I was particularly taken with what Rex Hartley had to say about the use of colour, which I've quoted above. As he says, "It is one thing to know [that colour in painting can have it's own internal logic] but quite another to do it yourself." I have to constantly remind myself of this.

Copying VG or Picasso is like putting down the math answer. I love that. I was just following a train of thought like this about the logic of color when it is local color - how it is never on its own, but exerts a complex logic within the whole.

Thanks for introducing Hicks-Jenkins.

This is just what I need right now. Thanks for that Harry and your encouraging words on my blog.

Casey -- I'm pleased to have struck a chord with your thinking.

John -- Glad to to be of assistance.

Really like your work...'a painting is a world apart with an internal logic created by the painter'...
Wish I'd said that myself....

Lovely discovery. Thanks for posting it.

I'm touched that you've written about me Harry. Thank you.