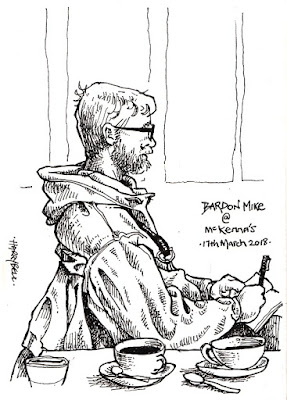 Saturday dawned grey and snowy, Michael was sensibly in bed with a cold, but I braved the chill wind and met the other members of Urban Sketchers Tyne and Wear huddling in the entrance to Haymarket Metro.

The plan had been to draw in and around the campus of Newcastle University but the weather made that deeply unattractive, so we opted instead for a return to the Great North Museum : Hancock.

This would be our third visit to the Hancock and for me yet another chance to draw pots. Annoyingly, I discovered I'd left my pencil case at home, but found a pack of Pitt pens in the bottom of my bag. 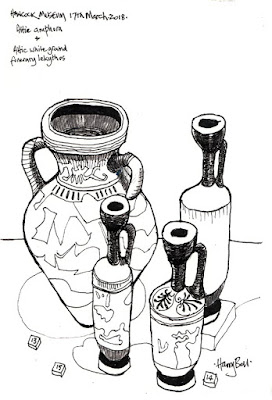 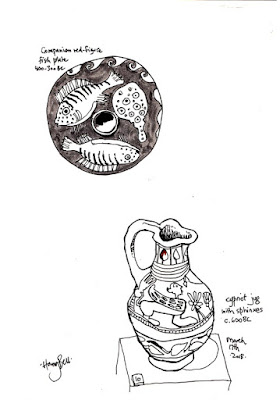 Sadly, the Hancock has a policy of closing its cafe at 3.30 so while some of us managed to snatch a coffee and a scone before they closed, Richard was reduced to drinking my little jug of milk.

In need of further caffeine we upped sticks and moved to McKenna's Cafe, just across the road. There we were able to sit and watch the snow being blown around outside, draw the Students' Union Building or simply draw one another.

Unusually for me, I opted for the latter and Bardon Mike, who'd joined us for the day from Berwick Sketchers, helpfully sat very still while I obsessed over the folds in his hoodie to such an extent that I can't help feeling he looks a little like a character drawn by Dürer (see top of post).

I thought the time round the table in McKenna's, laughing and sketching one another was a lovely way to round out the day and Kim even managed to get a photo of me smiling with Jenny (but then it was nice to see Jenny back with the group!). 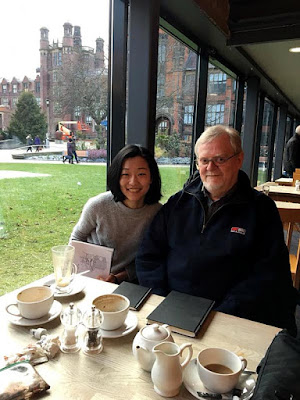 Next sketch crawl : 28th April, venue to be decided.

Really like the Bardon Mike sketch. Relaxed and characterful. I hope he's worthy of those adjectives
Kev

On my first meeting, the adjectives appear appropriate.