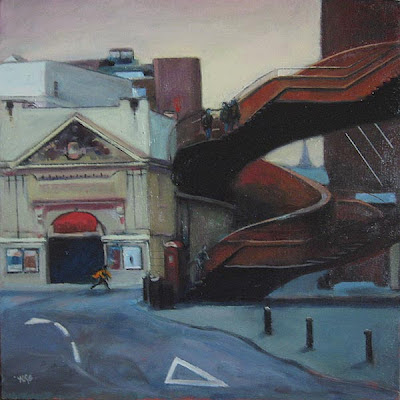 This is one of the paintings included in my exhibition currently running at the Newcastle Arts Centre. It's quite an old one - from 2004 - and for a while I was uncertain whether I would keep it at all. Recently, however, I took it out of the rack, gave it a bit of a tidy up. and decided I actually do like it. There's a more subdued lighting in it that suits Newcastle rather well.

The subject, in case you don't know Newcastle, shows at the left  what was built as The Oxford Ballrooms but has over the years had its name changed to reflect the need for something new for the yoofs. You may have heard of Thomas Heatherwick: he's the man responsible for the cauldron at the Olympic Games, one of his better efforts. In Newcastle he persuaded the Council that it would be a good thing to lay a pretend carpet of tiles made from crushed blue sherry bottles. the result was not the bright blue carpet he intended but a rather dull grey landscape. A little more effective was his cladding of a functional spiral metal  staircase in wood panelling. That's what you can see at the right hand side of the painting. It leads through a barren land of empty office buildings to a bridge over the Central Motorway - not one of Newcastle's highlights.
Posted by harry bell at 13:01

Harry,
Hadn't seen this before, and like it a lot. I didn't know that the blue carpet was 'cauldron' Heatherwick's work. One of his off days. There is a show of his stuff in the V&A at the mo.
Kev

I have mixed feelings about Heatherwick. Some of his ideas work well, like the cauldron, but he also made the "B of the Bang" at Manchester which had to be dismantled after big pointy bits kept falling off.