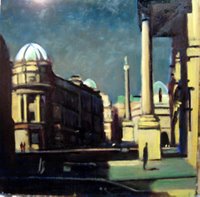 It's progressing slowly, but I'm happy with it so far. I like the way the domes are standing out against the new dark sky, even in their unfinished state. (That's not the sun appearing at the top edge. It's the studio light reflecting.)

I've filled out the pillar in the theatre portico on the right and the column of the Monument is taking form. There's a lot to do sorting out the intricacies of the architecture on the right, where the shadows are very complicated. I think I need to simplify them somewhat to get them to make sense.

I've straightened up the various verticals a bit. I have a natural tendency to make my verticals lean to the left, especially on the left of a picture, because I'm right-handed.

But I still need to address the curves running round the main building. Because they disappear into shadow, the curves tend to dip prematurely. I must remember that they continue into the the shadow, even if they can't be seen.

Two figures have wandered into the picture near the NatWest Bank on the left, and I expect I'll let them linger there. They complement, and almost set up a conversation with, the singleton taking form in the foreground.

It would be better if I could devote more uninterrupted time to this painting, but I had to leave off today to take care of business. A couple of punters are coming up from Oxford this weekend and want to see one of my pictures "in the flesh" before they make up their minds about buying it. This is all being done through a gallery in town, so I had to take the painting over to the gallery today.

Really like this painting. And I love the "lean". Stuff like that is intrinsic to you, and I wouldn't mess with it too much.

The painting looks great. I wonder if that guy knows the other two are out to get him? (Have I read too many thrillers, do you think?)

Ian - yes, I understand about the "lean" being part of my handwriting, as it were, and I won't eliminate it altogether.

Simon - good story. I'm very interested in narrative in painting. You can never read too many thrillers, or, in my case, watch too many films noirs.

It is a striking painting - may I ask what you're charging for it?

Welcome Winchester, and thanks for the compliment. When the painting is finished, I'll probably want £500 for it. It's 20 x 20 ins.