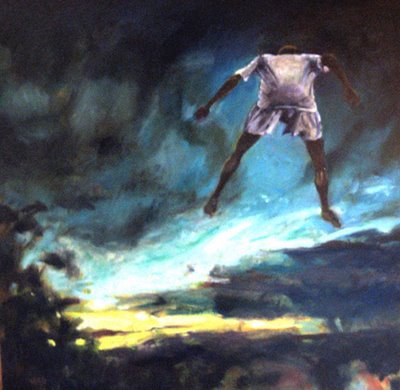 I managed to finish the painting on Monday night, putting on the final glazes round about 1.00 in the morning. Luckily, the morning's heat from the radiator dried it sufficiently to get it wrapped up to take to town.

But first - the Rat Man cometh. A different one from last time, older and a little more careworn, but nonetheless effective for that. On his way through the house he stopped to appreciate one of my pictures leaning against the wall waiting to be stored away, and we had a little chat about the difference between a "nice hobby" and a means to earning a living.

In the garden he nodded when I pointed out the burrow and said oh yes under his breath. Then, with the eye of one who knows about rodent life, he quickly located the run the rat has been using through to Lucy Smooth's garden of plenty.

And still no charge, unlike in other less responsible Council areas.

The Rat Man had come unheralded and held me up a little. I now found it was too late to take the bottom bus - stop that sniggering - because it would be full of horrible kids from the school down the road, punching each other, calling each other names and possibly even filling the bus so that I and my painting wouldn't get on, even if we wanted to.

Which meant a trip up the hill in the gusty wind, desperately hanging onto a picture nearly three feet square.. No fun, I can tell you.

And the bus ride was no better. The bus was an older model, without the helpful buggy-parking spaces at the front, so I was forced to sit on the long front seat balancing the painting on my toes. And where do we stop within five minutes of my getting on? The College down the road, where horrible older kids get on. They don't punch each other or call each other names, but what they do do, is stand next to the luggage rack in front of me in such a fashion that anyone wanting to get off, or indeed into the bus interior where there are of course plenty seats, has to push their way between the College tossers and my painting.

I spent the next 20 minutes warding off backpacks, carrier bags and little old ladies who instinctively grab for the top edge of a handy painting, and still heard a terrific crack! as someone wrenched the picture sideways sufficiently to make one of the joints complain.

By the time I'd arrived in town and wrestled with the wind-whipped picture up to the gallery, I was worn out.

What joy, then, to meet up with Patsy123 there, newly returned from London. She was cold and I was fraught. A coffee (she) and a pint of Cheeky Wee Beastie (he) put everything to rights.
Posted by harry bell at 17:16

This is an absolute showstopper ... well it is for me! I love it.

I have had a similar idea in my mind but have never got around to it ... now I won't bother! This one says it all.

Thanks, Lesly, and welcome! I'm still pleased with the picture, even if it didn't make it into the show.