A Taste of Real Winter 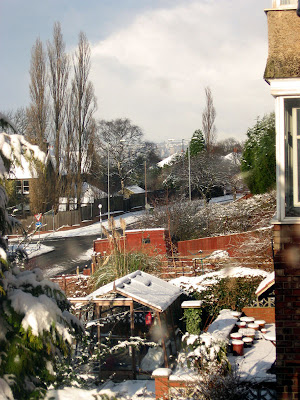 View from my rear window, looking north to Newcastle.
It seems almost incredible that in the last couple of days there were children in this country finding out what fun you can have with snow for the first time in their lives. But of course, winters have not been what they were for a very long time.
I used to moan about the blending of seasons one into another, so I suppose I should welcome this proper seasonal weather, but it is cold, isn't it? Still, if it means we might get a proper summer, I'm prepared to put up with it, and this being England, it does give us something to talk about, doesn't it? :0)
Luckily, it didn't snow while we were in Edinburgh. It didn't even rain, though the wind was pretty icy at times. Knowing Edinburgh of old, I'd dressed accordingly and didn't mind the wind on my face.
I'd gone with no great expectation of any interesting shows in the galleries there, because the end of January often signifies the changeover of exhibitions and the galleries can be closed for re-hanging, but I was very pleasantly surprised. Best of all was the annual showing of the Vaughan Bequest of Turner Watercolours at the National Gallery Complex. Under the terms of the Bequest, the pictures can only be shown in January every year, which reduces their exposure to light and consequent fading. As a policy, it's a resounding success, because the colours in the paintings are still so vivid. If you ever get the chance to go to Edinburgh in January, make sure you don't miss them!
Next stop: Dundas Street, where most of the commercial galleries cluster. It's rare that I don't enjoy an exhibition at the Scottish Gallery and I was lucky to find the current show of work by Gordon Bryce still on (it finished the day after we were there). Lovely, fresh paintings, mostly about 2 feet square or smaller, showing a lightness of touch and complexity of colour produced by layering and scraping back.
Over the road at the Open Eye, we found another great show, this one by Colin Black. Working mainly on a small scale (most were about 6 or 7 inches), he makes landscapes with collage and paint on board. They're quite exquisite jewel-like constructs with a fascinating choice of collage elements. He makes particularly good use of pieces of map, which have the effect, not only of providing useful colour and lines, but at an almost subliminal level register as "landscape."
We ate well in the Mussel Inn on Rose Street - I had a kilo pot of mussels with chillies, garlic, ginger, coriander and cumin, and Pat opted for a kilo with leek, Dijon mustard and cream. Fantastic.
Pat's son, Andy had sent up some money for my birthday to be spent on some of the Bow Bar's extensive range of single malt whiskies, so that's what we did. What was left over, I spent in the Whisky Shop in Princes Mall on a bottle of Ben Riach 12 year old single malt whisky, unusual for a Speyside malt because of its added peat. And who could resist the added interest of a dark rum finish? Not me. It certainly gets my vote.
Posted by harry bell at 14:09

Thanks, Casey. I'll raise a wee dram to you tonight!

The Colin Black pieces look stunning and evocative of landscape without literally representing it. I'm very partial to collage at the moment and starting to experiment with them myself. I've always been fascinated by the idea of palimpsest- the layering of things over time and collage feeds that fascination.

Me too. It just hasn't fitted into my work so far. But I'm sure it will at some point.

"What was left over, I spent in the Whisky Shop in Princes Mall on a bottle of Ben Riach 12 year old single malt whisky, unusual for a Speyside malt because of its added peat. And who could resist the added interest of a dark rum finish? Not me."

Dang, now I'm all thirsty for some reason. Glad to see you had an enjoyable trip to one of my favorite cities and a fine birthday, Harry.

Times like this you realise what a short timespan it takes to alter human behaviour. I still think snow has a magical effect - and I'm sure it's because it was so rare an event in my childhood on the South Devon coast. (I was born in the Big Snow of '46, but sadly don't remember anything.)

Hazel -- I was born in the Very Big Snow of 1947 and all my childhood memories of winter are of streets piled high with snow, sledging down the middle of the road, and waiting for the snow to come rumbling down from the roof onto passers-by.

Bruce -- there's a glass of Ben Riach (or something equally as good) waiting for you just as soon as you can get here.

Hi Harry
Sounds like a dam good trip.
I`m sure you that will have recharged the batteries.
Best Regards

MMmmmmmm Harry those chilli mussells and that whisky sound delicious.

Steve -- they certainly were.
Bruce -- you're welcome, buddy.