Sometime in the early Nineties I had a short flirtation with Mail Art. In fact, that's where I first used the pseudonym, Mr Zip. I sent ludicrous stuff through the post, altered envelopes with collage and stamping, and made spurious postage stamps. Other mail artists sent me very peculiar things with no explanation. One day an envelope arrived containing a dessert spoon. Some time later, I received a packet of custard powder. Not from the same person, however.

In the current welcome lull between bouts of painting, I've been poking about in rarely visited corners of the studio, and today I came across one of the last projects I began in my mail art moments. It's a hand-made book, glued together from magazine pages, advertising flyers and other stuff. The idea was that I would send it off into the mail art world, others would alter and add to the images I'd begun and pass it on to other mail artists. Eventually, I'd hope that it would find it's way back to me in all it's multi-imaged glory.

I'd tried the idea before, but I have to say that it didn't work. None of the originals came home to roost. Eventually, I got bored with it all and began painting in earnest. And so the one remaining book stayed home.

Looking at it now, I remember that I made the images without any real conscious effort, so there's an instinctive connection between the various page elements. Some of them still hold up in an interesting way, I think, so I've posted them here: 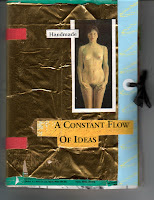 They remind me a bit of the altered books and imagery I now find on the Interweb (and in their origins, just a little of the sketchbook exchanges). I've recently been reading Seth Apter's blog, The Altered Page, and become very interested in that corner of the art world. I have, in fact, contributed some thoughts to his forthcoming art world survey.
Posted by harry bell at 12:43

Very interesting! I've had pulls in that direction but haven't ever given myself enough time to create a body of work. Thanks for the link - look forward to exploring it.

Interesting to see these pieces. Will you be doing some more?

From looking at these I reckon it would be well worth you returning to collage sometimes- they are good, witty & cleverly balanced. (Is that a pressed leaf or a paper one?!)

The link to The Altered Page is welcome too, there's some lovely stuff over there.

Sometimes it's difficult to be objective about one's work, especially if it's out of the ordinary, and I confess I was testing the water a little with this post.

In view of your positive feedback, I suspect I may return to collaging again in due course.

... oh, and Anna, yes it's a real leaf. It came to me in another envelope of mysterious mail art pieces.

Thanks for the link to my blog Harry. I agree with the other comments -- these are wonderful pieces. Great compostion and a natural flow about them.

Thanks, Seth. This is all very encouraging.